Home » Overcoming the Fear of Writing 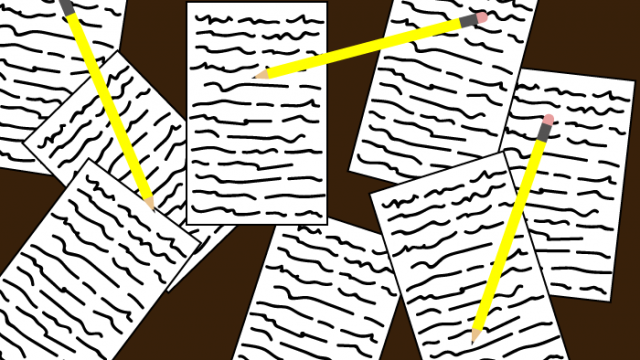 Overcoming the Fear of Writing

I think that 7-year-old me had the whole “writing as a full-time thing” nailed down to a science. A few times a week, I’d plop myself in front of a keyboard, cuddle up to a box of apple juice, and begin typing as fast as I could with two fingers whatever stories had emerged in my head. I fervently believed that I could do it all. When I wasn’t allowed to use the computer, I took to writing these stories out by hand. I even made illustrations for most of them. I was a writer and illustrator all at once, and believed myself to be a true tour-de-force.

It didn’t matter that my plot lines closely resembled those of my beloved Magic Tree House series or that my stick figures looked more like marshmallows haphazardly skewered onto sticks. What mattered was that I was writing, and fully believed that this was what I was meant to do.

But in my middle and high school years, the idea of writing and what it meant to be a writer entered into more nebulous territory. I was afraid of even claiming to be a writer. Sure, I thought I could write reasonably well, but I was daunted by the habits of professional writers. They write every day and take careful notes everywhere they go, and I was just slaving away writing essays for English class and never writing what I truly wanted to.

When I came to college, I noticed that this sentiment was reflected in my peers as well. Many students at Boston College are afraid to write, and the word “essay” strikes fear in their hearts, let alone “creative essay.” Despite being an English major, I too was afraid to write, but taking creative writing classes at BC has changed my perspective on writing.

My reintroduction to creative writing in college was not so much a quick and easy whirlwind, but more of a slow reconciliation. It did teach me quite a bit about myself, however, and about the importance of creative writing.

On a whim, I decided to take a creative nonfiction writing workshop this year. Initially, the workshop format itself—having others critique your work while you sit there patiently—was a hard thing to swallow for a workshop newbie. This course, however, taught me focus. I learned how take feedback and edit my work. Much to the chagrin of my professor, who advised us against using clichés, I could say that I learned that to be a better writer, one must write often. What I will say, instead, is this: in becoming a better writer, I learned how to write often, but I also learned to be humble, take breaks from writing and listen to others, and to never view my work as quite finished.

It was through my fiction workshop that I understood the greatest benefit of creative writing. I began to see the act of writing fiction as a close imitation of life itself. There’s conflict, rising action, falling action, climax, tension, and all that good stuff that can be found within the texture of our own lives. The greatest source of encouragement I found, however, were the words of Charles Baxter, whose essay, Burning Down the House, we read a few weeks ago: “When all the details fit in perfectly, something is probably wrong with the story. It is too meaningful too fast … the writer has decided what her story is about too early and has concentrated too fixedly on that one truth.” The best aspect of life that manifests itself in fiction writing is the notion of nothing being preordained, that a story is written down as it is being conjured in the imagination.

In truth, writing should not be a source of fear. Though it might seem daunting, taking a creative writing class at BC can help alleviate this fear. Because you are writing constantly, you not only get the opportunity to improve, but also to engage in dialogue with other writers and receive feedback from them. Being in a creative writing class can eradicate the fear that one is ineloquent or under qualified. These workshops serve as opportunities to learn, express oneself, and reimagine life itself.

fear writing creative
What Has Impressed You the Most About BC So Far?
Breaking the Course Comfort Zone 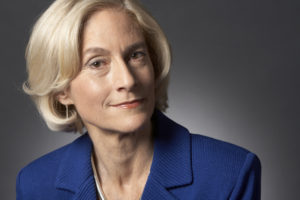 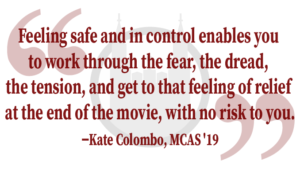 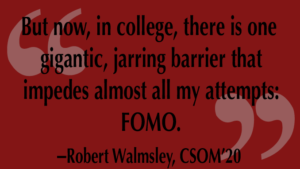