March for Science Draws Thousands to the Common

On a rainy and near-freezing Saturday afternoon, thousands of science lovers showed up on the Boston Common as a part of the March for Science that took place in cities across the country. Clusters of students debated the merits of climate change science right next to families with little kids that held scribbled signs covered with stickers. All generations of geeks came out in full force of the merits of effective and comprehensive science.

The crowd spanned from the front of the stage near Beacon Street all the way back to the Parkman Bandstand. Many clutched witty signs, braving their hands against the cold in order to broadcast mostly political messages. “Save the planet, recycle Trump,” one said. Other marchers dressed as their favorite science heros, like Miss Frizzle, from The Magic School Bus, and Bill Nye.

This event was at first designed to be a march coinciding with the bigger march in Washington, D.C., on Saturday, but safety concerns led to a rally-style event instead.

“We will march, we will vote, and we will change behavior,” said former NASA Deputy Administrator Dava Newman in her speech.

A delegation of Boston College students were at the rally.

“I went to the rally to show my support for science,” said Dan McCarthy, MCAS ‘20 and the organizer of Climate Justice at BC, which was also at the march. “I think it’s immensely important that we fund scientific research, especially in medicine, energy, and climate change, and our politicians need to know that.”

Most of the signs and the conversations started at the rally were centered around President Donald Trump’s proposed cut and tightening control of the government’s science powerhouses, like NASA and the EPA.

“There seems to be this huge rise in anti-intellectualism and the complete dismal is facts,” said Leslie Templeton, MCAS ’20. “We’ve entered the ‘alternative facts’ era, but it’s important to remember what science actually tells us.”

“All of you nerds need to run for office,” said George Church, a legendary genetics professor at MIT and Harvard.

The 15 speakers at the rally held the crowd’s attention as they shared their personal stories about how science has impacted their lives. Activists, entrepreneurs, and rocket scientists alike shared the stage and poured their hearts out to the crowd of thousands.

Each speech centered around one theme: inclusion. All dreamed of a scientific community that is one day as diverse as our nation. This includes all races, genders, and those with disabilities.

Graciela Mohamedi started out her speech in Spanish and delved into a story of how a man once assumed she was the janitor in her engineering lab because of her ethnicity. Alicia Wooten described the systematic barriers between herself and her desired research as a deaf scientist.

“Representation is the most important tool for the younger generation,” Mohamedi said. “You cannot teach that science matters without inclusivity. Scientists need to look like them.”

This thoughtfulness of all people was incorporated in the event itself. There was a whole children’s section where kids were able to watch interesting science demonstrations and learn more about STEM fields. Signs everywhere backed off the crowd from the walkways to make sure that wheelchairs could get around. A quiet tent was constructed for those who felt sensory overload to take a break from the crowds.

Another message common to the speeches was that this rally was not enough—further action was needed in order to make this event a success. There were stands for many non-profits like the Sierra Club and Voter Choice Massachusetts had tables at the rally itself so the rally-goers could sign up to help.

“The key to making progress is following rallys with action,” McCarthy said. “If we follow these rallies with legislation in Congress, or state initiatives, that’s when we’ll achieve the most.” 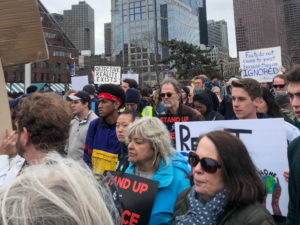