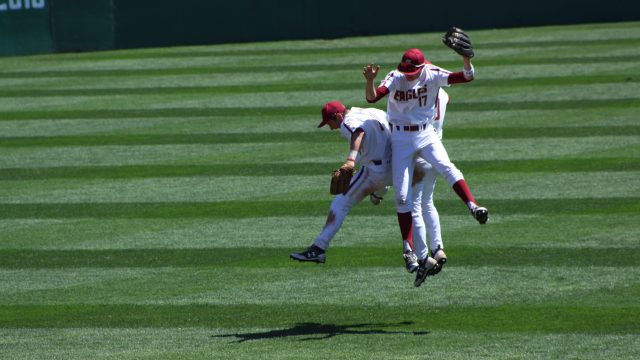 At 5-foot-10, Dan Metzdorf isn’t going to blow fastballs by hitters like his cheddar-throwing teammate, Donovan Casey. Instead, Metzdorf’s approach is meticulous, methodical, and, on Sunday against North Carolina State, nearly unhittable.

The lefty specialist made the best start of his career for Boston College baseball in the opening game of a doubleheader, tossing a career-high eight innings and allowing just one run in a series-clinching 2-1 win over the Wolfpack.

The sophomore kept his pitch count low by pounding the zone and letting his defense do the rest. The Eagles didn’t make an error for their third-straight game, with Jake Alu, Johnny Adams, Casey, and Metzdorf himself all making impressive plays in the field. NC State managed just three hits all day against Metzdorf, who retired the last seven batters he faced.

Birdball first got on the board with some of its patented small ball in the second inning. After Alu and Jacob Yish tallied back-to-back singles, Adams laid down a picture-perfect squeeze bunt down the first-base line. Not only did Alu score from third, but Adams evaded the tag on his way to first and reached safely.

In the fifth inning, the Wolfpack rallied against Metzdorf to tie the game. Evan Mendoza led off with a double and advanced to third on a single by Joe Dunand. With runners on the corners, Brett Kinneman bunted, but it didn’t work as well as when the Eagles tried it. The sacrifice moved Dunand into scoring position, but failed to score Mendoza from third.

With one out, catcher Andy Cosgrove got the job done with a flyout to center that was just deep enough for Mendoza to tag up and score. Michael Strem fired a bullet to home plate, but the tag was not in time.

While Metzdorf dealt on the rubber, NC State starter Brian Brown also silenced BC’s bats. He lasted 6 2/3 innings, allowing four hits and striking out 11 hitters. In comparison, the Eagles only struck out five times as a team on Saturday.

One of the main culprits was Gian Martellini, who recorded a hat trick by striking out in his first three at-bats. But in his final plate appearance in eighth inning, BC’s cleanup man connected with one.

After Jake Palomaki singled and advanced into scoring position on a sac bunt, Martellini found a pitch he liked and turned on it, shooting a double past the Wolfpack third baseman for the go-ahead RBI. It was Martellini’s team-leading 26th RBI of the year and his third game-winning RBI of his career.

Casey closed the door again for the Eagles, recording a 1-2-3 ninth inning for the save and solidifying their second-straight ACC series victory.

If anyone in the rotation deserved a win, it was Metzdorf, who entered Sunday’s start with a 1-5 record that does not tell the full story of his season. He was pegged with the loss after tossing six strong innings of one-run ball against No. 1 Louisville last month. A week later, he threw six scoreless frames against Clemson, but he earned a no-decision. Wins are hard to come by in the ACC, and they’re nearly impossible with a low-scoring offense like BC’s.

Metzdorf has come a long way since last season, when he made 17 appearances and only one start. The longest he lasted in an outing was two innings, and his ERA rose to 8.00. This year, he has been a viable No. 2 starter for a pitching staff lacking in depth. And today, although he doesn’t look the part, he certainly played like an ace when his team needed him most.