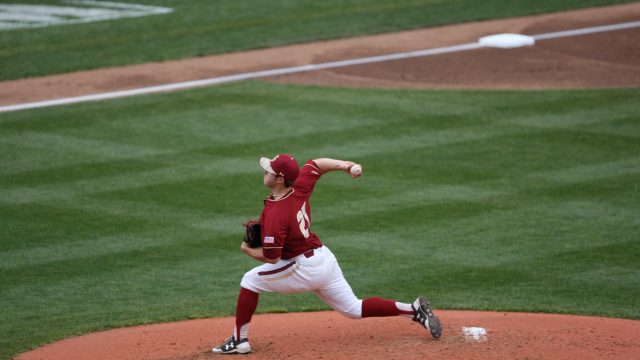 With ACC Tournament and NCAA Tournament hopes on the line, Boston College baseball entered Sunday’s series finale against the University of Miami with one goal: Get back in the win column. Excellent defense, seven quality innings from starter Brian Rapp, and timely hitting throughout the lineup combined to earn the Eagles a big 9-2 win to avoid the sweep against the Hurricanes.

BC (17-24, 7-17 Atlantic Coast) didn’t hesitate to jump on Gregory Veliz early, the first right-handed starter Miami (22-22, 21-11) had thrown this weekend. Capitalizing on two early walks in the first, catcher Gian Martellini crushed a home run over the left-field wall, putting the Eagles up 3-0 at the end of the first. Veliz and the Hurricanes, however, refused to break and the next two innings yielded perfect frames for both starters.

The Hurricanes smelled their chance in the fourth to cut into the deficit after Michael Burns doubled into the left-center gap to lead off the inning. Following a well-executed Romy Gonzalez hit-and-run, Burns opened the scoring for Miami on an RBI groundout by Hunter Tackett. Rapp managed to closed the door on the inning, leaving the ’Canes down two.

As the clouds darkened and rain began to fall in the top of the fourth, the Eagles, sensing Miami’s energy, knew that they had to respond. Continuing his hot afternoon, Martellini started the top of the fourth with a leadoff single. Stepping to the plate with men at the corners with one out, Jacob Yish delivered a line drive into the left-center field gap to score the sophomore catcher. But Veliz would again recover and strand two men on base at the innings end.

Feeling little pressure through five, Rapp started the sixth inning with two quick outs. But BC’s kryptonite, Hunter Tackett, kept the inning alive for the ’Canes with a hit by a pitch. That gave center fielder Carl Chester all the opportunity he needed. Slapping an outside fastball the other way, Chester ripped a double down the right field line to score Tackett and make it 4-2 before he ended the inning by recording the third out trying to extend the hit to a triple.

Rapp emerged from the bench to throw the top of the seventh. Despite a wild pitch, he tossed seven complete innings in what was his second-straight polished outing. Veliz, after pitching six full innings, would hand the reigns over to reliever Jesse Lepore for the bottom of the inning.

The Eagles wasted no time exploiting Miami’s move to the bullpen in the bottom of the seventh. Johnny Adams led off with a rocket double down the left field line. After advancing to third on a Dempsey sacrifice, Palomaki drove in the RBI with an opposite-field single. Casey followed Palomaki’s hit with a single of his own up the middle. In an aggressive play, head coach Mike Gambino called for a double steal and his top two hitters answered.

“I gave those guys the green light and they executed,” Gambino said. “That definitely energized the team and put [Miami] in a difficult spot. They pitched Strem different and we took advantage.”

With runners on second and third, the ’Canes again went to the bullpen and handed the ball to fellow right-hander Albert Maury, Jr. But the Eagles’ bats were hot and Maury, Jr. didn’t fare much better. With the bases loaded, a red-hot Martellini launched one to deep left field to score Palomaki on a sacrifice fly and bring up a struggling Mitch Bigras to the plate.

“Bigras has a knack for taking advantage of RBI opportunities,” Gambino said.

After an 0-for-3 day, Bigras responded to the RBI chance with a line shot to center field that extended BC’s lead to 7-2.

After a poor show by the bullpen in yesterday’s ninth-inning meltdown, John Witkowski executed a flawless eighth inning with the help of a solid BC defense spearheaded by Brian Dempsey. The Eagles scored two more in the bottom of the eighth off the bat of Strem and a beautiful suicide squeeze by Palomaki. Despite loading the bases with two outs, Witkowski struck out Batista to end the game and secure the win for Birdball.

Sunday’s win in Chestnut Hill was huge for keeping the Eagles playoff hopes alive. Rapp provided a bright spot for the Eagles in what was, overall, a somewhat disappointing homestand. The big bat of Gian Martellini, who had four RBIs on the day, as well as the golden glove of third baseman Brian Dempsey both provide excellent launching points for a young Eagles team thirsty for a postseason run.