A framed page of newsprint, organized in columns around black and white photos of women marching, hangs behind Angela Ards’ desk. In the sparsely-decorated space which she just moved into, the bold headline—“Sisters Act”—stands out.

“My favorite story is this story,” Ards said, pointing over her shoulder. “It’s actually my very first.”

The story was published in The Village Voice on July 25, 1995. The famed boxer Mike Tyson had just been released from prison after a three-year sentence for rape, and Ards’ piece was a reflection and examination of the homecoming. On a personal level, it was the first time a major publication had trusted her to write a full feature.

“It was an effort to bring the awareness of violence against women and domestic violence to the community,” she said. “It begins with a quotation from Anna Julia Cooper, who was a 19th-century black feminist writer and educator.”

Opening with a Cooper quote is a lofty bar. She was a famed activist and writer and the fourth African-American woman ever to earn a doctoral degree.

This literary opening anticipated where Ards’ career would eventually take her. When she wrote it, she was only starting out as a journalist two years out of UCLA with a masters in Afro-American studies. But her first feature was far from her last. She went on to work at The Village Voice as a deputy copy chief, contributor, and senior editor. Her byline has since appeared in Time, The Nation, and The Los Angeles Book Review, and she has published two books of her own.

This journey through journalism—which began in Texas, her home state—has led her to Boston College, where she is now tasked with helping to create and build a journalism minor that brings together many facets of her own experience. The first step toward that larger goal occurs every Tuesday and Thursday morning at 10:30 a.m.

A dramatic narration crackles over the speakers in Campion 235.

“With infinite complacence people went to and fro over the earth about their little affairs, serene in the assurance of their dominion over this small spinning fragment of solar driftwood which by chance or design man has inherited out of the dark mystery of Time and Space.”

“Ladies and gentlemen, we interrupt our program of dance music to bring you a special bulletin from the Intercontinental Radio News. At 20 minutes before eight, central time, Professor Farrell of the Mount Jennings Observatory, Chicago, Illinois, reports observing several explosions of incandescent gas, occurring at regular intervals on the planet Mars. The spectroscope indicates the gas to be hydrogen and moving towards the earth with enormous velocity … We now return you to the music of Ramón Raquello.”

So begins one of the greatest works of fake news ever written.

On this morning, Ards plays the original recording of Orson Welles’ 1938 War of the Worlds broadcast at the beginning of her class. Seventy-nine years ago, this radio broadcast announcing a hostile alien invasion sparked panic across parts of the United States. Despite Welles’ disclaimer that the broadcast was nothing more than “Mercury Theatre’s own radio version of dressing up in a sheet and jumping out of a bush and saying Boo!” people thought they were listening to a real news broadcast and that the aliens had finally arrived to overthrow and annihilate humanity.

The class discusses the implication of this event. Was it satire? A hoax? What would the difference be? They analyze the way the story is told, from the subtle nuances of characterization and dialogue, to the gradual pacing that shepherded the listener from a broadcast of Latin music through to a potentially dangerous astronomical phenomenon and finally to the impending doom of an alien invasion.

Once they’ve analyzed it through, Ards has a concluding question.

“In this mass democracy … what happens when you have these fake stories?” she asks.

It’s a profound question to end on—one that characterizes the entire course.

Students heading into her class might not have expected to spend an hour investigating the literary techniques a 1938 radio play about aliens. Her course, titled “Fake News: What’s it Good For?” seems primed for a constant exploration of Facebook hoaxes and content farms, but Ards’ investigation into the phenomenon goes much deeper than the past year.

“The idea of the class is not just to increase and better our media literacy, although that’s important,” she said. “The class really is more about thinking historically about fake news and how something that has actually been with us since antiquity, if you look at the Western tradition—why is it so troubling for us today?”

One of her students, Marta Seitz, MCAS ’18, joined the class because of how dramatically it stood out from other English classes. She hasn’t been disappointed.

“She does a good job of choosing very relevant stories both from the past and from current events,” Seitz said.

Her approach impressed faculty as well as students. She had the idea for the class before she even had the job. When she came in to interview, she pitched it to the faculty, who were immediately enthused by it. Once she landed the job, it was quickly decided that Fake News should be her first class.

“The course filled up fastest out of any journalism or English course,” said Carlo Rotella, director of American Studies and an English professor.

Rotella, who is also an accomplished journalist, was one of the faculty involved in hiring Ards. When he helped bring her to BC, he had much bigger plans than just one class. Together, they are now working to craft the new journalism minor and expand BC’s journalism offerings. Ards’ Fake News is the kind of course Rotella hopes to develop and strengthen within the new minor.

“We have really good craft courses—how-to courses, many taught by professional journalists,” Rotella said. “But there are other ways to look at journalism as a way of thinking, whether that’s history or ethics or as an intellectual tradition.”

Ards offers both sides of that approach. Since her first major story in 1995, she’s proven her writing ability many times over. Her knowledge of the craft is undeniable, even to the simplest detail. Even at the beginning of her class on War of the Worlds, she couldn’t resist quickly explaining grammatical necessities to her students—such as the period going inside the quotation mark—to help polish their writing. But her focus clearly broadens to the intellectual tradition Rotella mentions and to larger ideas of journalism. This broadening mirrors her path from The Village Voice and professional journalism to academia.

After working at The Nation Institute, Ms. magazine, and the Surdna Foundation, she changed her course in 2002 and attended Princeton University, where she earned an M.A. and Ph.D. in English.

Her decision to pursue an academic career came during a time of major upheaval in print journalism. In April 1996, The Village Voice became free and shifted focus toward its online version.

“I saw journalism change, and the kind of journalism I like to do—like longform journalism and literary journalism—it was more difficult to do in that particular atmosphere and context,” she said. “As I read some of my favorite writers, who were still doing the kind of writing that I liked to do—they were all professors.”

In 2007, after finishing her Ph.D., she took a job as an assistant professor at Southern Methodist University. As an academic, she published two books, and is currently working on another about black southerners who remained in the South and established southern communities during the Great Migration.

This book is another reason she stood out to BC professors.

Now—as she brings her two careers together at BC—she is faced with a year full of change and hard work. The proposals she and Rotella have put together for the journalism minor have to go through committees and approval processes, she has to plan out her classes and design ones for the future, and she has to confront one nearly-insurmountable challenge that has plagued her since moving from Texas.

“I thought Dallas drivers were the worst drivers—the wild, wild west,” she said. “Not so.”

After adapting to the insane realities of Boston, Ards has the chance to shape the way journalism is taught at BC—from understanding its broad intellectual history to learning the best way to write a decent kicker. To understand the broader mission of this attempt to teach journalism, it might be worth looking to the 19th-century woman who inspired the opening of Ards’ first feature—Anna Julia Cooper:

“If it does not turn out better, nobler, truer, men and women—if it does not add to the world’s stock of valuable souls—if it does not give us a sounder, healthier, more reliable product from this great factory of men—I will have none of it.” 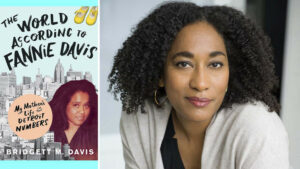