This Year, TEDxCambridge Redefines the Rules

Last Thursday, about 2,500 Bostonians, guests, enthusiasts of knowledge, gathered at the Boston Opera House for the fall series of TEDxCambridge, an independently organized set of TED talks that highlight innovative ideas originating from the New England area.

This year’s theme was rules—how we break of them and work within them. Although each of the five presentations differed immensely from one another in regards to discipline, they shared a common quality of disruption, and of challenge to our conventional grasps on science, life, and society.

Michael and Amy Port, a husband and wife duo who specialize in public speaking, opened the night of talks with the first presentation. The two are the founders of Heroic Public Speaking Worldwide—although, their roots lie in drama and performance, as both hail from prestigious art schools with MFAs in Acting.

Michael and Amy began on a bench, situated right the iconic red TED dot in the middle of stage. Dramatically speaking, however, the bench sits in their imagination as performers, whether their chosen setting be a park or the bleachers for a baseball game. The two hold a conversation, a scripted dialogue to one another as if they are isolated on stage in their own world. They deliver their TED talk as a performance, looking each other in the eye, pacing around, stroking their chins, drawing out their words for emphasis, gesticulating as they lead the audience through their philosophy about performance, and the importance of it in life. Like all TED talks, their act is meticulously planned—so what’s the difference? During the presentation, Michael and Amy are talking to each other, not at the audience. The crowd gets to learn not just from the content of their presentation, but from the way they carry it out. They simulate a casual conversation between two immaculately eloquent thinkers—but the key is in the audience’s vantage point which lends the chance to realize that strong public speaking shares so much in common with graceful acting. Before the duo ended, they broke the fourth wall with the audience.

“View life as a performance, cater how you act based on your end goal,” Amy said.  “Be authentic. You affect everyone with your actions so you might as well be intentional at it.”

Following their presentation, Glenn Cohen, a leading expert on bioethics and law, took the stage. Cohen started by asking the crowd: “Are there non-human persons? Are there non-person humans?”, two questions he has spent his career exploring. Cohen asked the crowd to consider if they would have empathy for an entity like Big Bird—yes the Sesame Street character. Would the crowd would treat him more as a person, or the same way someone would treat a chicken?

Cohen argued that humans need to avoid speciesism, and refrain from assuming that other living things besides us do not deserve the same moral treatment. He explained that most people conflate the terms human and person, as if they mean the same thing, when in reality human is a scientific term, and person is a term to refer to something with certain capacities for feeling and sentience. He cited the example of Koko the gorilla, “who knows a few thousand words in sign language” and who, at one point, even adopted a kitten. Does Koko deserve personhood?

It’s a complex moral issue, Cohen admitted, but he urged the audience to think more carefully about ethical treatment of living things, and to spend more thought than simply “is it human or not?” when making important decisions.

After Cohen, Mike Boston was introduced to share with the audience his initiative of “Mobile Stü,” a traveling studio he brings around the inner city neighborhoods of Boston.

A rapper as well as the voice of national campaigns for the Boston Celtics, Boston has roots etched deep in the local area. He started by sharing the story of Antoine, a child he met through a shared interest in rap music. Although Antoine struggled with involvement in gangs and violence, he found escape through recording music, and expressing his personal story, his struggle with his family, through music.

“Expression—It’s a freedom in our country, but why is it that so many people still feel voiceless?” Boston asked.

The Dorchester native told the crowd how much he regrets not reaching Antoine sooner, so that he could have prevented Antoine from committing a mistake and getting arrested. Boston believes that through music, onner-city youth have a chance to find themselves, tell their story, and cope with issues in a productive way. He also emphasized that although there is interest in recording and expression, most adolescents don’t have the means to access a professional recording studio. And so, he installed a professional recording setup in the back of his truck, which he drives around to the neighborhoods of Boston to work with youth, to “give voice to the voiceless.” Boston hopes that through Mobile Stü, more teenagers can find a positive form of release, that through self expression, they can share with society their piece of humanity.

Up next was Tsedal Neeley an award-winning professor in the Organizational Behavior unit at the Harvard Business School. She started with a history lesson: In 2012, Japanese billionaire Hiroshi Mikitani made an announcement to 7000 employees of his company, Rakuten, forever changing how the business is run. Mikitani decided to adopt English as the company’s official language. Throughout the next five years, Rakuten employees all around the world started to pick up English and use it in the workplace—and for five years, Neeley was given full unconditional access to the company’s operations, tracking the changes and results of the language shift.

She shared her findings with the crowd, that Japanese employees struggled immensely, worked longer and harder than ever before. She also noticed that English-speaking employees excelled in the beginning, as expected. Neeley was surprised to find, however, that at the end of the experiment, the roles were reversed. Employees who had learned English for their job became more culturally-prepared than ever and in-tune with the global culture of the company. On the contrary, English speakers were hit with culture shock, and struggled to assimilate to the company’s global shift.

Neeley asked the crowd to consider just how much language and culture are connected, and to entertain the possibility that they are two separate things. Neeley suggests, from the observations at Rakuten, that “language can be the bridge needed to join cultures together in clarity.”

Closing off the night was Dheeraj Roy, a Neuroscientist and Postdoctoral Associate in the Department of Brain and Cognitive Sciences at MIT. He shared with the crowd his advancements in understanding early stage Alzheimer’s.

As someone whose family had been affected by Alzheimer’s, Roy explained that his drive for curing Alzheimer’s stemmed from his desire to help his grandmother restore her memory of him. His discovery came from shining lights in mice brains that simulated neuronal connections.

“The memory is still there, like a book lost in the library,” Roy said. “It’s just that the brain can’t retrieve it.”

After experimenting on mice, he found that indeed, if he could facilitate neuronal activity, the mice regained memory from before. Even though his method may not arrive at the stage of human trial for another 10 years, that it has lit the way for other researchers to consider retrieval of memory as an avenue of treatment.

So just as forgotten memories might not be lost after all, perhaps the rules aren’t exactly what we imagine them to be. 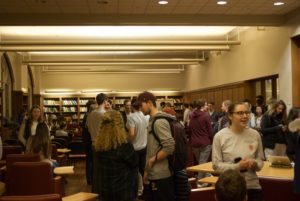