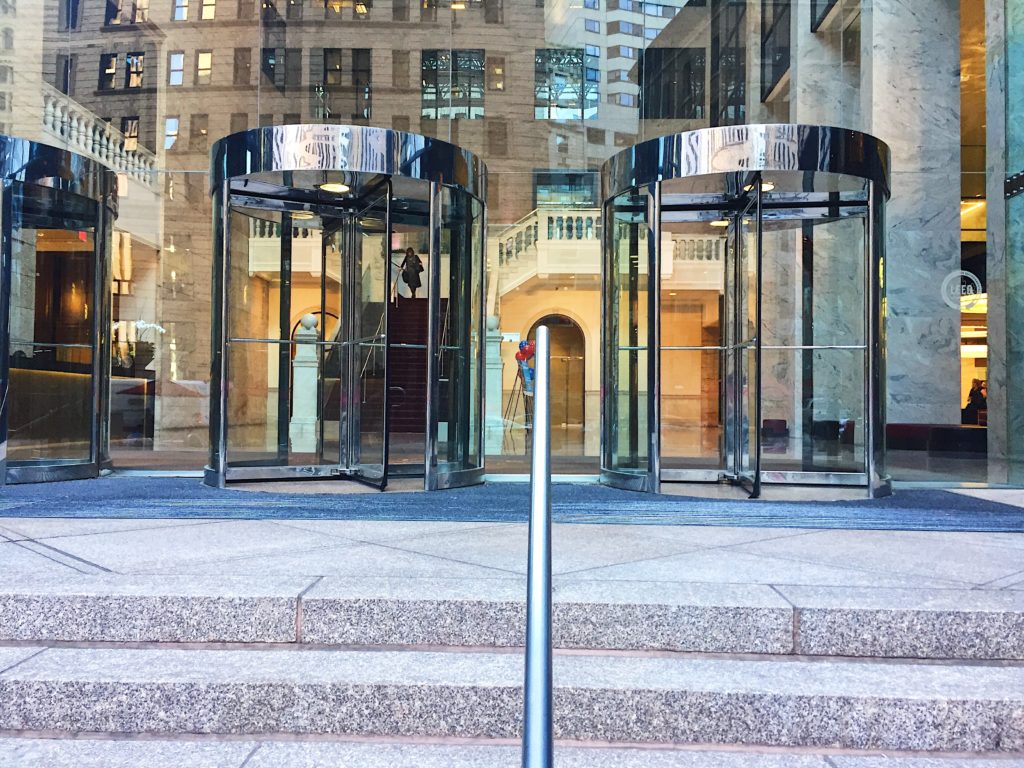 The Vestigial Stairs of 53 State Street

Right in the middle of Boston’s financial district lies 53 State Street, which is a good thing, because it looks like it belongs there. Newly renovated, the structure towers over the others that border it, jutting up from the concrete like a shard of obsidian. It is starkly modern, with sharp, geometric lines and walls composed of endless panes of blueish black glass. As the daylight fades each afternoon, 53 State Street begins glowing from the inside. The once opaque glass becomes completely translucent, revealing sharp grids and crisscrossed lines of scaffolding that serve as the building’s bones.

Even if you don’t like modern architecture, the building is objectively beautiful. It isn’t pretentious, and the lines are clean, almost classic. It’s the kind of building that piques a curious desire to see in the inside, ultimately pulling you toward the front entrance. Perhaps the inside will be the complete inverse of the darkly tinted outside, a wash of antiseptic and calming white. Or maybe it’s like something out of a science fiction movie, just as dark as the outside would have you expect, with thin tubes of lighting running up the walls like veins.

But whatever you might expect as you approach the revolving doors of the entrance, it probably isn’t what you first get a glimpse of through the glass.

You’ll squint, edging closer to the doors, peering through the distortion of the glass to get a better view of the structure in question. After hesitating for a second, dreading the awkward feeling of loitering in an office building where reporters for The Boston Globe bustle around, you’ll push through the spinning door, and burst into the lobby, standing open-mouthed in front of exactly what you thought you saw from the outside: a grand staircase more suited to a castle than a workplace.

The staircase unfurls from the back wall of the lobby, making it one of the first things that face you upon entering 53 State Street. An elegant confection of white marble, curling carvings and delicate pillars decorate the stairs, and a gleaming gold railing runs through the middle of the stairs themselves. The banister on each side of the staircase is wide and sturdy—exactly the kind of banister begging to be decorated with curling tendrils of ivy or boughs of pine once winter holidays roll around. On the first landing of the staircase, where it branches into two smaller staircases going to the right and the left, a gold-plated globe shines atop a marble ledge, slowly ticking away as the day goes on. It’s the kind of staircase that only makes appearances in Disney movies as the princess makes her way down to a wedding, the staircase you dream about sliding down as a kid, a million times better than any slide could ever be.

You don’t often see this kind of staircase anymore, the sheer decadence of the marble is a rarity in and of itself, and the opulence of design is reminiscent more of the Golden Age. It’s a strange staircase to have selected along with the building’s modern design, like elements from two completely different eras were grabbed by an architect and smooshed together—which is exactly what happened.

The staircase, aptly called the Grand Staircase, was built in 1896, when the buildings was first constructed to house the Boston Stock Exchange. Back then, a constant stream of people rushed through the building, and the staircase itself was admired across New England for the beauty of its design. But as decades passed and tastes changed, the powers that be for 53 State Street decided that by the late 1980s, the building was in need of a makeover, and the lobby was completely redone. Many of the room’s opulent elements were lost, and the staircase itself was one of the few elements that builders chose to preserve.

For a while, the staircase wasn’t even in use, it just remained in the lobby like a vestigial bone. But when they refurbished the lobby once more, the staircase remained was put back into use, a ghost of a past time that people refuse to release. The refusal might appear odd, especially today where spending the time to create luxurious and beautiful—but ultimately unnecessary—seems frivolous in the face of almost surreal problems that have plagued the country and the world over the past few months alone.

But it’s important that we hold on to these beautiful fragments, allowing them to hang around like figments of a faded dream. With them around, we can have beauty even if we momentarily lack the energy to create it ourselves. More importantly, we can have inspiration for the time when that energy finally returns.