Rev. Paul McNellis, S.J. Forms the Next Generation of Gentlemen

Boston College is home to a gentlemen’s club. No, not one with a seedy neon sign or unsavory characters lurking inside—an actual gentlemen’s club, one that is quite the opposite of pop culture’s portrayal. It is a club where undergraduate male students gather once a week at St. Mary’s Chapel to discuss their faith in Jesus Christ and hope to live the lives of Catholic gentlemen.

The organization, called the Sons of Saint Patrick, is led by Rev. Paul McNellis, S.J., one of BC’s most beloved professors in the philosophy department. McNellis guides these young men, along with other students in the BC community, in upholding values that are close to his heart: respect, discipline, justice, telling the truth, and following one’s duty.

In a school campus where binge-drinking and hookup culture are prevalent, sticking to Catholic values may not always be so easy. McNellis realizes this and hopes to help students figure out what values are important to them and how they can stay true to those values.

“Sons of Saint Patrick didn’t want to participate in hook-up and drinking culture,” McNellis said. “They thought that this isn’t what it means to be a Catholic man.”

He first learned these values from his father, whom he says was the most significant figure in shaping his moral life. He helped him understand the importance of telling the truth and doing his duty, and what it meant to be just and see justice in the world.

McNellis was born in Miami in 1946 and grew up in Saint Paul, Minn. He jokes that being the oldest of four brothers and four sisters prepared him for entering the Jesuits. Living in close quarters and living with people with many opinions and needs, it’s easy to become a person for others, simply because no one can afford for one of the children to be selfish.

“Well, I kind of—only half-jokingly—say that by the time I entered the Jesuits, I dealt with every moral problem within the family except for kidnapping and murder,” McNellis said.

He was studying political science at the University of Minnesota during the Vietnam War but left in 1968 to enlist in the United States Army. From 1970 to 1971, he served with the Military Assistance Command in Vietnam, working closely with the South Vietnamese Army reconnaissance units.

McNellis illustrates one of his most salient experiences during his time in the military. He recalls the time when the Vietnamese commander of the South Vietnamese unit that McNellis served in fell in combat.

“I think if you’ve been in combat, you have the experience that you know better men than you died,” McNellis said. He remembers feeling deeply anguished and confused at the death of the commander, who he believed to be a man of great virtue and morals.

After leaving the Army in April 1971, McNellis earned freelance journalist credentials and began his work as a reporter by sending stories to news outlets. He worked mostly for the Associated Press, but was hired in Vietnam to work as a freelance journalist. He wanted to return to Vietnam to work as a reporter because he could not reconcile what he was reading in the U.S. press with what he was learning from letters he was receiving from his Vietnamese friends in Vietnam. Instead, he decided to see and report firsthand.

Seeking the truth from soldiers on the front lines was not the only thing McNellis wanted. Wracked with guilt and frustration from the death of his commander, McNellis turned to God for answers, hoping to understand why he had survived while the Vietnamese commander had not. His journey began in a similar way to St. Ignatius Loyola, the man he would later study in great detail when he became a Jesuit, who discovered God and Catholicism following his time as a soldier.

“I got an answer in prayer that came very clearly,” McNellis said. “It was as if God were saying, ‘You’re right. He was a better man than you and that’s why. You need more time. I’m not finished with you yet.’”

Experiences such as the death of the Vietnamese commander added fuel to McNellis’ already burning desire to serve others. He vowed to make the most out of the time God has given him.

Serving in Vietnam was only the beginning of McNellis’ long journey of service. When he came back to the U.S. after finishing his work as a reporter in Vietnam, he enrolled in an intensive Vietnamese language course at the University of Southern Illinois. He hoped to learn Vietnamese and then go back to Vietnam to work for Catholic Relief Services. After six months of intensive language training, however, Catholic Relief Services asked him to go to Cambodia instead, which was facing a severe refugee crisis due to the war. He deferred his acceptance to Cornell University, went to Cambodia and promptly started learning Khmer (the language of Cambodia).

“I thought that if I were studying at Cornell and I were reading the newspaper about events about Cambodia, and I knew that I could have gone to help, I wouldn’t be able to study for one thing,” McNellis said.

In Cambodia, McNellis worked with emergency refugee relief, during which he supervised the distribution of food and shelter for the thousands of refugees fleeing the fighting between the Cambodian government and communist forces.

McNellis left Cambodia in 1975, when communist forces won in both Vietnam and Cambodia. He then continued his education at Cornell University, where he studied Southeast Asian Studies. While at Cornell, he decided to enter the Jesuits, so he went to Syracuse for two years and began preparing for his life as a Jesuit. Further studies as a Jesuit included time in Oxford, Munich, and Rome. He was ordained a priest in 1987 at the Fordham University Chapel.

Upon completion of this studies, he was assigned to teach Ethics and Political Philosophy to both seminarians and lay students at the Gregorian University in Rome. Due to health problems, however, he left Rome and came to Boston, where University President Rev. William P. Leahy S.J. offered him the opportunity to teach at BC while still remaining close to his doctors. In 2000, McNellis began teaching in the program Perspectives and later in the Capstone program at BC and has been doing so ever since.

Teaching students is just another chapter in the book of McNellis’ life of service. Just like he served refugees in Cambodia, he continues to serve students at BC by trying to get students to see the love of God.

“We want to, through example, show what a Catholic gentleman is,” Martinez said. “We value respect of others, respect of Christ, and upholding his teachings, but also a sense of personal duty and loyalty to a cause.”

Through his years at BC, McNellis has seen how difficult it was for some students to try and understand their faith within a school context that often distracts them from matters pertaining to God. The Sons of Saint Patrick provides the perfect atmosphere for male students to escape their busy academic and social calendars to come together for a couple hours and discuss various issues, such as what it means to be a father and how to be a good friend—all of which are explored through the lens of Christianity. Aside from the prayer and conversation that take place during their weekly Thursday meetings, the Sons of Saint Patrick aim to live by example in the hopes of transforming themselves as well as society both spiritually and socially.

Gloria Oh, MCAS ’18, is a philosophy major who has also fostered a close relationship with McNellis since her freshman year.

“He’s actually the reason I became a philosophy major,” Oh said. “He was always available to talk about my life and he’s just this really caring guy.” Oh recalls the many times McNellis made himself available to help her navigate her way through college and she looks to him as a role model for living a Christian life.

His commitment to serving a life of God and upholding high moral standards is reflected in his relationships with his students, whom he treats with the utmost care and respect.

At the heart of McNellis’ life has always been brotherhood—whether with his many biological siblings, the soldiers in his command, or the massive network of Jesuits who have taken the same vows. Now, at BC, McNellis has transitioned from being a brother to also being a father, guiding the Sons of Saint Patrick to follow a life of service as he did. 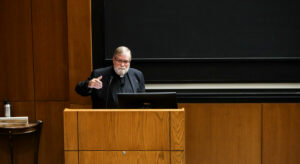