Amul Thapar, BC ’91, on His New Job on Sixth Circuit Court of Appeals

Amul Thapar, BC ’91, was nominated to the the United States Court of Appeals for the Sixth Circuit in March, and assumed the position in May after being confirmed with a 52-44 vote in the U.S. Senate. The seat that Thapar filled had been vacant since 2013.

Thapar was included on a list of potential Supreme Court nominees by then-candidate Donald Trump for a seat that was eventually filled in the spring by Neil Gorsuch. Earlier in his career, Thapar became the first ever federal judge of South Asian descent, and he is the second Indian-American judge on the Court of Appeals, after Sri Srinivasan.

“What I hope I represent is that with hard work anything is possible,” Thapar said in an interview. “I’m a child of immigrants, I’m someone who’s achieve above what I’d anticipated and I hope that what I show to others is that it is possible with hard work to accomplish anything.”

Thapar credits his success that he has been able to achieve at such a young age to “a lot of hard work and a lot of luck.”

After graduating from Boston College, Thapar went on to earn his Juris Doctor from the University of California, Berkeley School of Law.

Thapar loved his time at BC and said that it gave him the chance to grow, sometimes in ways that he did not expect.

“I loved my experience there and I love going back with my friends,” he said. “It was an opportunity to grow in a lot of ways. I always thought that when you went to college you would grow by being in the classroom but I found that I grew a lot more from all the things you learn outside of it.”

In 2007, Thapar was nominated by President George W. Bush to fill a seat on the United States District Court for the Eastern District of Kentucky, where he worked until his nomination to the Appellate court this past May. Thapar worked as a trial judge in the District Court for nine and a half years.

“I was thrilled [when I received the nomination] and honored to even be thought of as someone who could fill the seat on the Court of Appeals it’s a tremendous honor and opportunity for someone like myself or for anyone and I felt very lucky and blessed,” he said.

The transition from working on the District Court to the Sixth Circuit Court of Appeals brought changes to Thapar’s job. While working for the District Court, Thapar tried cases and interacted with the lawyers, witnesses, and juries on an everyday basis. The Court of Appeals consists of much more reading, studying, and less human interaction, Thapar said, although he thinks the change in jobs came at a perfect time.

“You’re reinvigorated to do the job and it’s a new job and a new challenge and I love that aspect of it,” he said.

Less time in the courtroom allows Thapar more time to devote to his other interests, such as public speaking and teaching.

“I love public speaking, and it actually gives me more time to get to the law schools to talk on different topics that I care about,” he said.

Thapar teaches multiple college classes at the University of Virginia, Vanderbilt University, and the Chase College of Law at Northern Kentucky University. He teaches classes about criminal defense, judicial defense, and the Supreme Court.

Even with the current tumultuous political climate, Thapar said that the courts are functioning as usual and are not political. He said that he and the other judges rarely disagree and if they do, it is always in a polite and respectful way.

“Even when we disagree, I am always amazed at just the kindness and thoughtfulness of my colleagues, and how hard they work to reach agreement,” he said. “And when they reach disagreement they’re not disagreeable.”

When asked if he saw working on the Supreme Court as a future career path for himself, Thapar responded that he doesn’t really think about that but instead focuses on the job he’s doing now.

“I’ve always found that you should do the best at whatever job you’re doing and enjoy what you’re doing and the future will take care of itself,” he said. “I think the most important thing for me, and for all people, is to love what you do and not plan for a future step that may never come.”

amul thapar
What Was the Craziest Halloween Costume You Saw This Weekend?
Racist Incidents Reported in Gonzaga Hall 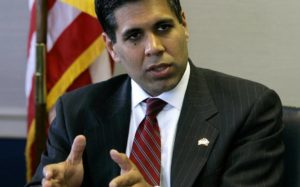