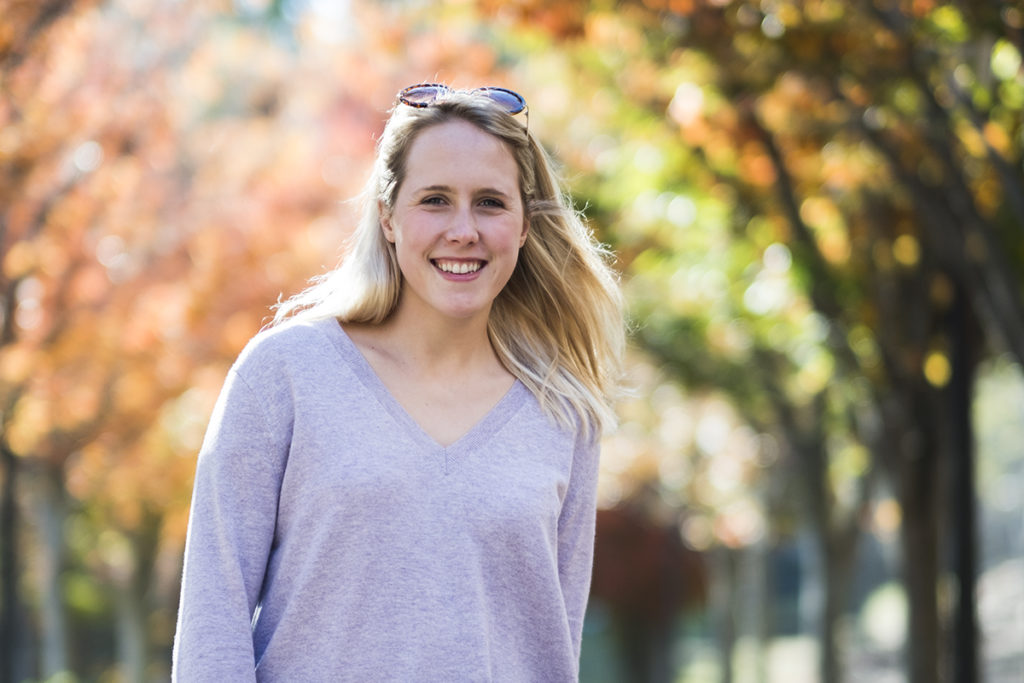 Molly Davis, MCAS ’18, discovered that the best-kept secret at the United Nations lies in the room overlooking Manhattan’s East River. The small room was a place to relax. On lunch breaks, in the lush blue and gold chairs, Davis would often read in preparation for her thesis, and sometimes nap like royalty. The seats were gifted by a Saudi Arabian Prince. These peaceful moments were precious to Davis, moments of respite in the middle of days full of long, complicated work. In her time working at the U.N. in the Department of Political Affairs, Davis ate, breathed, and slept Middle Eastern diplomacy.

Davis has been fascinated with other countries since she was a kid. Her aunt and uncle were professors, and when they went on sabbatical to different spots around the world, Davis and her family would go to visit. She has been everywhere, from Japan and Southeast Asia to Scandinavia and the Mediterranean.

“Growing up in Chicago in a fairly protected community I was really excited to experience the world outside,” Davis said. “I was interested in what other children were doing and how other children lived.”

In high school, Davis’s curiosity about the world became focused on the Middle East when she read A Thousand Splendid Suns by Khaled Hosseini. The novel tells of the struggle of women under Taliban rule in Afghanistan. Davis was drawn to the novel because it was her first time reading a female perspective of the Middle East. But she was uneasy because even this telling account of misogyny and oppression was written by a man. She decided she wanted to give more voice to women in such restrictive countries.

Davis began fundraising for the United Nations Children’s Fund (UNICEF) in high school and became familiar with the organization, which provides humanitarian relief for children and parents in developing countries. In the summer of 2016, she landed an internship at UNICEF as an assistant to the Community Development Fellow. That summer, Davis visited schools, camps, and donors’ homes to raise awareness about the organization.

While at UNICEF, she was also responsible for promoting Kid Power Bands. Sponsored by Disney and Target, the band looks similar to a FitBit and counts steps taken as points. Points accumulate and earn food packets for kids in-need across the globe.

The idea for the band came from two statistics: a quarter of American children are considered inactive and a quarter of children worldwide are malnourished. Much of the Kid Power Band work brought Davis to underprivileged neighborhoods in Chicago. Hers was not a charity mission, as many of the American kids she met were in their own difficult situations. Davis sought to help kids in Chicago understand the concept of global citizenship, and hoped to show kids in need of help that they too could help others.

After that summer with UNICEF, Davis was confident it was the organization to which she wanted to dedicate her career. But she felt she needed another perspective on international relations. While abroad in Vietnam in Spring 2017, Davis applied to three internships at the U.N. and received a call to interview for a position in the Middle East and West Asia Desk of the Department of Political Affairs. She was offered the internship, but the human resources department had overlooked the fact that she was an undergrad. The position was intended for graduate students.

They took her word for it and assigned her to cover Yemen. Between February and May, she read everything she could about Yemen.

On her first day in Manhattan, it was pouring rain.

“I hung around the office for a while introducing myself to people and someone came up and said ‘They’re discussing Iraq in the Security Council, do you want to go?’”

Davis jumped at the opportunity. She took her seat right behind the semi-circle table around which the delegates routinely sit and was only a few yards away from U.S. Ambassador Nikki Haley.

Davis’s boss was not the typical intern overseer and never tasked her with coffee runs. Instead, she was encouraged to sit in on whatever interesting meeting was going on that day. This came with a few limits, as some U.N. meetings require a level of security clearance higher than that which is typically given to interns.

But Davis had her own classified information to work with. The conflict in Yemen is particularly complicated because of the lack of on-the-ground media outlets. Davis was responsible for compiling what small amount of information she could get her hands on—mainly cholera statistics and death counts in bombings and shootings—into a report for the Secretary General. The report was then passed on to the media, who used it as a primary source for reporting on the conflicts in Yemen.

Despite the fact that Yemen is currently experiencing the world’s largest civil war and humanitarian crisis, it receives little attention because few Western countries have any interests there. The civil war is being fought between the current government and Houthi rebels, who are allied with Yemen’s former president. Both sides are responsible for human rights abuses, which further complicates the matter. There are no clear good guys.

The civil war has made Yemen a difficult place to live. Such conditions might drive other people away from their countries, but in Yemen there is nowhere for refugees to flee. Neighboring Saudi Arabia and Oman want nothing to do with outsiders and would prefer to focus on their lucrative oil operations.

Despite the grave danger posed to Yemeni citizens, Davis sometimes worried how easily her job could seem like typical office work. The U.N. requires a graduate degree in order to do ground work. Her fellow interns were all grad students who hailed from Egypt, New Zealand, Russia and South Korea and logged hours working in peace-adverse countries. Davis found she sometimes lacked the ability to experience how her office’s work was specifically translating into saved lives.

“I would read all these horrible statistics and it felt like nothing was getting done,” she said. “I know things are technically happening and I know the U.N. does great things. But it was discouraging to see money spent on something and ask ‘Why isn’t this going to cholera relief?’”

Nevertheless, Davis is determined to continue pursuing a career in international aid work. After graduating in May, Davis hopes to pursue a fellowship at UNICEF and then go on to grad school. With a graduate degree, she knows she wants to gain experience working in conflict-ridden countries.

“To understand the work you’re doing you need to be with the people” Davis said. “You have to keep grounding yourself and recognizing your work is important because it’s somebody’s life.”