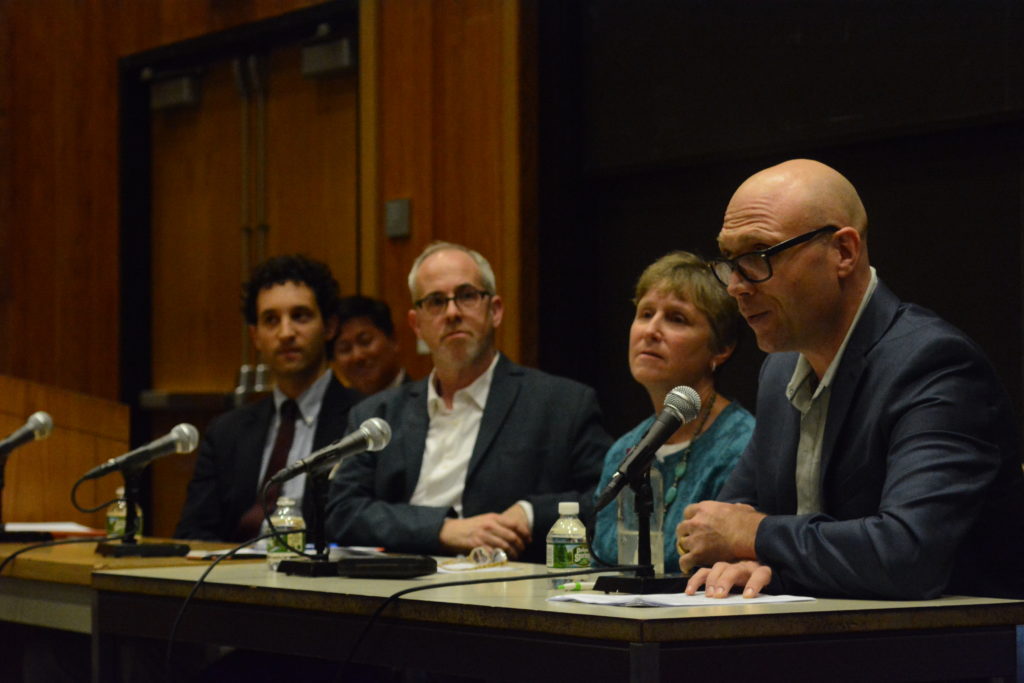 The Boston College Asian Studies Program hosted a panel on Monday in which several white faculty members had an open discussion about what it means to be white in a sometimes racially charged world.

During the panel, which was titled “Whiteness: A Faculty-Student Dialogue about Race,” the four professors addressed issues such as educating oneself about the United States’s long history of systemic racism, being able to recognize one’s own white privilege, and being willing to participate in uncomfortable conversations about race.

Min Song, a professor in the English department who served as the discussion facilitator, said that the idea for an all white panel originated from a blog post written by an African-American professor whose name escaped his memory.

“He pointed out that at his school, he’s always asked to speak on panels about race and it is often the case that the only people who are on these panels are other faculty of color,” Song said. “[The professor] wondered if it made more sense for white faculty to speak about race more often on panels because otherwise [the university] may be inadvertently communicating the idea that race is only an issue of concern for people of color.”

Song’s idea was met with widespread support and several faculty members volunteered to reflect on what it was like to speak about race as white professors and what it meant to think of whiteness as a race.

Song first introduced Yonder Gillihan, a professor of theology, who admitted that it took a long time for him to recognize the privileges that society granted him. He explained that it was very easy for him to forget about race because of the fact that he is white.

He added that it was not until he married a non-white person that his eyes were opened to the privilege he possessed.

“My wife is Chinese and her very different set of values that she brings to our family reveal a lot about the peculiar nature of my own values,” Gillihan said.

He said that the changes that his family has brought into his life have allowed for him to acknowledge his privilege and participate in dialogues that confront the nation’s problems of racial inequality. He encouraged white students to do the same and to not be as hesitant as he was to join in on the conversation.

“We white people created race,” he said. “We invented the concept, and we deployed [it] against our non-white brothers and sisters. It’s our responsibility to figure out ways to dismantle it.”

Marilynn Johnson, a history professor, then discussed her own experiences with race. After growing up in a white neighborhood and attending predominately white institutions in Long Island, N.Y., she became a social historian in an attempt to figure out how race played a role in constructing her “all white world.”

Johnson studied urban and metropolitan history throughout her career and came to the conclusion that some of the most important forces to segregation have been institutionalized and are often invisible.

White people typically do not think about these invisible factors that preserve the institution of racism because it does not affect them, according to Johnson.

Johnson emphasized the need to educate individuals on these massive structural issues by encouraging students to take classes on the African Diaspora, Latin American studies, and Asian studies. She also advised people to broaden their news outlets in an attempt to find information not addressed by the mainstream media. Johnson said that in doing this, students will be more willing to have these difficult conversations about race with their peers.

Eric Weiskott, a professor in the English department, touched on the importance for white individuals to recognize their whiteness as a race. He pointed out that some may feel as if they do not have a race.

“This is a really good measure of the power of race and whiteness,” he said. “It’s white privilege to be able to think that one escapes race.”

Weiskott argued that in order to improve society, white individuals must be willing to engage in conversations about race, no matter how uncomfortable it may feel.

“The pursuit of a just society is in BC’s mission statement,” he said. “We must put our own white privilege on the line and give it up in solidarity for people who don’t have it.”

Julian Bourg, a professor of the history department, commented on the white experience at BC. He said that white students and faculty are unable to talk about race because it is something that makes them uncomfortable or because they are unable to recognize their own white privilege.

Privilege is not having to think about this, he said. When people say they are not privileged, to Bourg, that is the best indicator of privilege. He then analyzed the best ways to raise awareness about this issue.