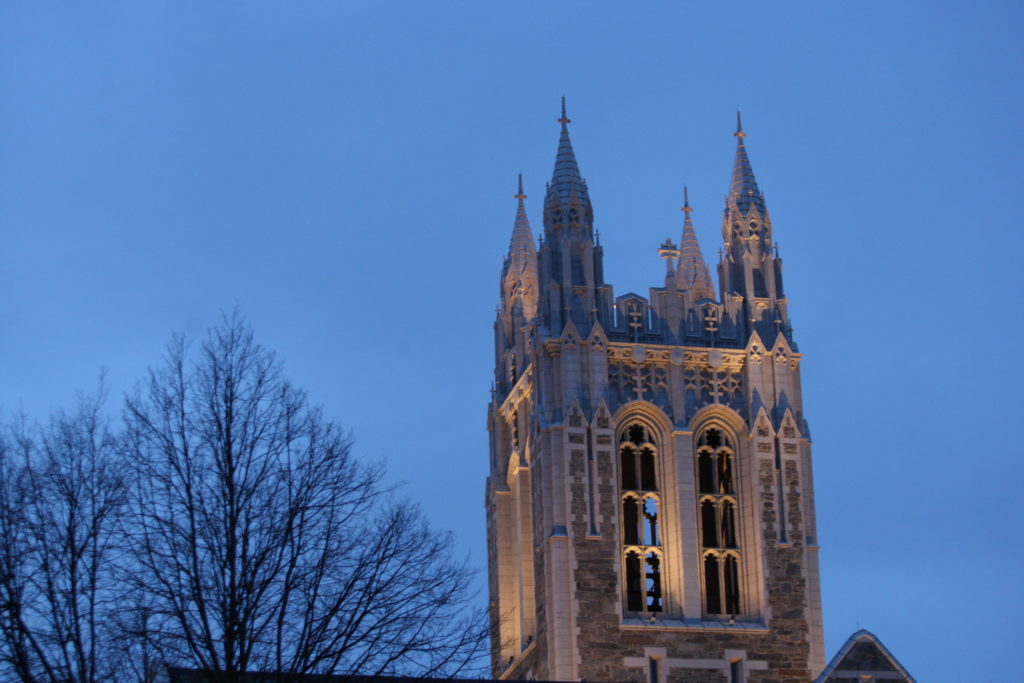 Last weekend, 20 Boston College students attended the Ignatian Family Teach-In For Justice in Washington, D.C. The teach-in, held annually to address relevant social justice issues in the context of the Catholic faith, was focused this year primarily on issues of racial justice, mass incarceration, and immigration.

Nearly 2,000 young people from over 120 Jesuit and Catholic universities, high schools, and parishes were in attendance, making the event the largest Catholic social justice gathering in the United States.

Amanda Bolaños, MCAS ’18, who attended the teach-in, explained how one of the speakers has given her a new perspective on how to respond to the recent incidents of racism that have occurred on BC’s campus.

“Father Massingale gave this beautiful speech about racism in America,” she said. “He mentioned, ‘I lose my moral right to speak on peace if I do not first speak on justice.’ He really put in perspective for me how I’ve always considered myself an ally, but I’ve never necessarily actualized those actions … It put a fire under me to really voice it, and not just think these thoughts that are ally-worthy, but actually act upon them.”

Breakout sessions were held after each talk, with more than 50 total options, including lectures, discussions, and Q&A sessions, offered throughout the weekend for students to pick from based on their interests.

Nick Stasium, CSOM ’20, said that he went into the teach-in not knowing what to expect, but hoping that it would help him see both sides on every issue. While the speakers did help him consider new perspectives, he said, he believes that some of them did more to simply affirm people’s pre-existing beliefs than to persuade those who were undecided or on the other side of the issues that were talked about.

He also expressed that there are ways in which he believes the speakers might have addressed these issues more effectively.

In one of the breakout sessions, the hosts of jesuit(ical), a podcast from America Media, mentioned the walkout BC students held last month in response to racist incidents during a live recording of their show.

“These students at BC were like, ‘Catholic social teaching tells us that we have to care about people who are marginalized, people who are oppressed. We can’t just be comfortable in saying that going to mass every Sunday is enough. No, we have to listen and be involved,’ which is what we’re doing this weekend,” said Olga Segura, associate editor at America.

On Nov. 6, the attendees gathered at Columbus Circle to pray and listen to social justice advocates. Following this gathering, they participated in an advocacy day, in which nearly 1,400 of them met on Capitol Hill with the staffs of various members of Congress to advocate for immigration and criminal justice reform.

Among the staff members BC students met with were those of U.S. Senator Elizabeth Warren and Rep. Brian Fitzpatrick of Pennsylvania’s 8th Congressional District.

“It was very interesting and powerful, and just nice to know that we had a voice in things,” Bolaños said. “You’re talking to staff members, and there’s not much they can do … But both [of them] were reassuring and good listeners. Realistically, we wonder how far that will get, but it’s nice knowing that we tried and we gave it our all.”

Bolaños said that, while the views of Fitzpatrick’s staff member regarding border security and immigration reform did not necessarily align with those of the group of BC students who met with him, this did not prevent them from being able to have a worthwhile discussion on these issues.

“I think [they] met us with a lot of patience, as did we [with them,]” she said. “We had great conversations, and I thought it was really fruitful. I think that both sessions went really well.”

Bolaños, for whom this was her fifth time attending the event, noted that this year’s teach-in consisted of a much stronger feeling of collaboration between Republicans and Democrats in comparison to last year’s, which took place only a week after the 2016 election.

“This year was really focused more on building a bridge … I think it was more hopeful,” she said. “Last year … a lot of people were just frustrated. It was exciting to see the progress of building these bridges and these thought processes coming together.”