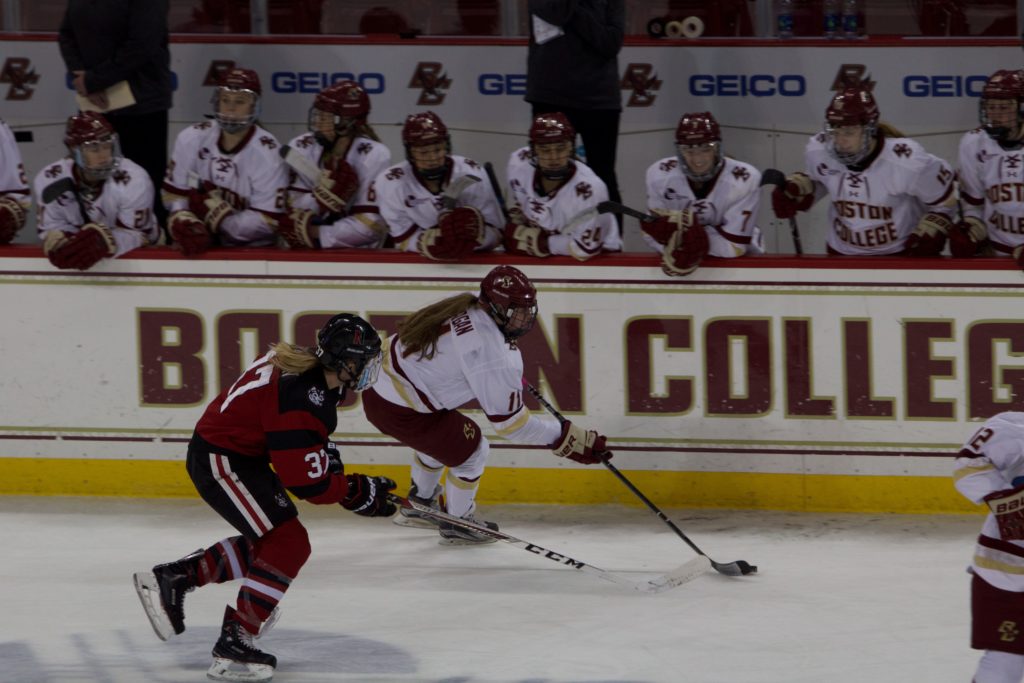 A year ago, Boston College women’s hockey needed overtime to dispatch Northeastern in the Hockey East Championship for its fourth-consecutive title.

This season, the Eagles are again the cream of the crop—and the Huskies still don’t have enough to pull off the upset.

No. 2 BC (12-1-2, 6-0-2 Hockey East) ran its conference undefeated streak to eight games to start the season, handing Northeastern (9-8-2, 5-5-1) a disappointing 7-3 defeat on Tuesday night at Kelley Rink. The Eagles’ victory came just six days after they handed Harvard an eight-goal loss.

“They’re a very good team,” head coach Katie Crowley said. “I was really happy with the way our players found ways to score goals when we had opportunities.”

Entering the season ranked No. 4 in the country, the Eagles have continued to climb. A brunt of the effort has been put on the duo of Daryl Watts and Caitrin Lonergan, who rank first and second in the country in points, respectively. It was no different against the Huskies, as Lonergan netted a hat-trick with two assists and Watts added a pair of goals.

Lonergan wrestled the title of the team’s leading goalscorer from Watts, as they entered with 15 apiece. A year removed from a 15-goal freshman campaign, she already has 18 through the first two months of the season.

“She has had the most dynamic change from last year,” Crowley said. “She’s stepped up her game and I’ve been really impressed with how she handles herself. She’s really changed right before our eyes in the year-and-a-half we’ve had her.”

Lonergan scored just over three minutes into the game, burying a one-timer after Kenzie Kent scooped up a rebound behind the net and found her at the point. A resilient Northeastern team, however, coming off of a season-defining win over No. 1 Wisconsin, rallied. Just over a minute later, while falling to the ice, McKenna Brand backhanded a rebound at the crease for the equalizer.

Seven minutes later, it was Watts’s turn. The freshman forward darted in to capitalize on a turnover on the blue line. With just the goalie and the defender to beat, she passed it to Lonergan, who immediately returned it to set up a wide-open shot for Watts. To cap off the one-two exchange, the freshman flung the puck into the back of the right side of the net.

The opening period featured uncharacteristic play from both teams, as their vaunted power plays—the Eagles ranked third and Huskies sixth in conversion percentage coming into the night—created more chances for their shorthanded opposition. They swapped 5-on-4 opportunities in the final five minutes of the first period, and both nearly gave up shorthanded goals. Northeastern’s Andrea Renner got off a low shot that was turned away on a sprint to the net, while Kent and Watts alike had one-on-goalie chances where they came up short.

The power-play struggles would continue for the Huskies, however, as they finished 0-for-4, even failing to score during back-to-back chances in the second.

“They move a lot on our power play and we did a great job in staying in lanes,” Crowley said. “They had seven shots on them, and they say your best penalty killer needs to be your goalie and I thought Katie [Burt] was that for us.”

Kent had her hand in BC’s opening salvo in the second, feeding Delaney Belinskas in the crease to poke it through Huskies keeper Aerin Frankel’s legs. Then, with just over five minutes left in the period, it was Watts and Lonergan, reversing roles. Watts gathered a puck at the blue line and fed a cutting Lonergan, who faked a shot and cut to the right, beating a defender to bury a low shot in the bottom left portion of the net.

That was enough for Frankel, who conceded four goals, while recording 16 saves—a surprising outcome considering the fact that the freshman goaltender entered second in the country in save percentage and third in goals against average. Replacement Brittany Bugalski didn’t fare much better, though, allowing a pair of goals in relief.

BC’s Kent and Watts quickly scored in the third, tallying goals a minute apart. Kent’s finished over Bugalski’s right shoulder while cutting in, while Watts used a nifty move in the crowded area between the circles for her second goal.

Lonergan capped the Eagles scoring—and completed her hat trick—with 3:23 left on the clock. The sophomore buried a shorthanded goal, deftly finishing a backhanded breakaway that Bugalski had no chance on.

BC has been held to two goals or less just twice in 15 games this season, and the firepower up top means they’re able to match up with anybody in the country. Lose track of Watts or Lonergan and it won’t end well. The Eagles had six players record two or more points on Tuesday night, boding well for a deep run in the postseason.