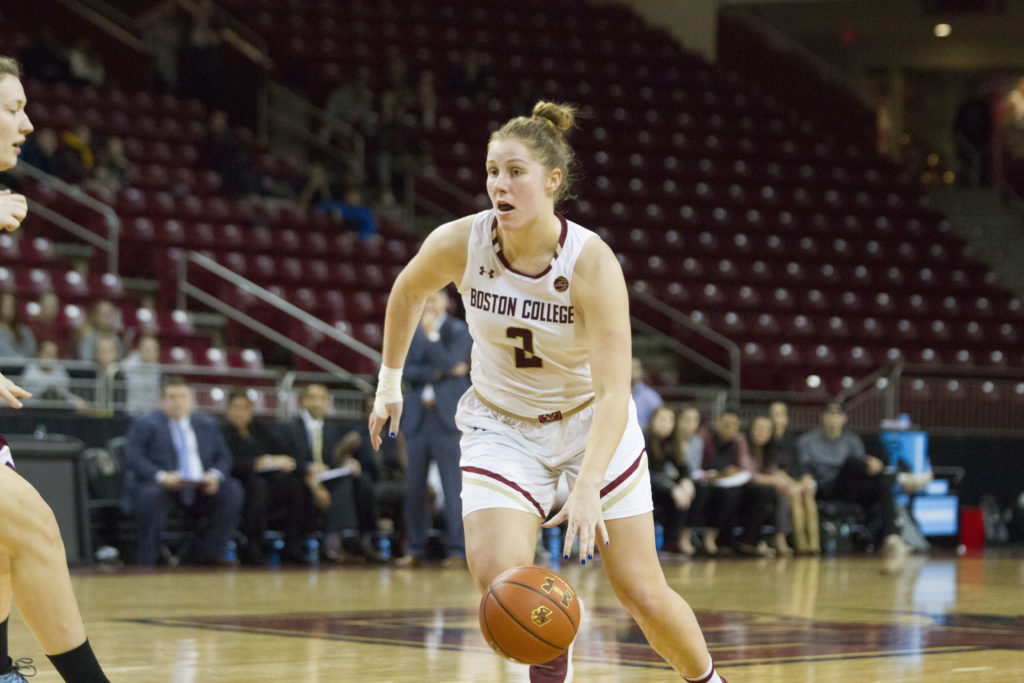 Boston College women’s basketball owned the paint in the first quarter of Wednesday’s game at Columbia. So much so that the Eagles scored all of their 14 points in the lane. Time and time again, Georgia Pineau, Andie Anastos, and Milan Bolden-Morris drove to the rim, finishing at will. At the end of the frame, the Lions trailed by five, and it was apparent that they had no answer for BC’s inside attack.

Eventually they found one. Slowly, but surely, Columbia started to plug the key, all while dominating the Eagles on the glass. In the final three quarters of play, the Lions outrebounded them, 32-19, including 12-6 on the offensive end of the floor. Not only was BC’s inside presence diminishing, but the Eagles were also losing control of the game as a whole. Just like Sunday, BC let a halftime lead slip, ultimately falling to Columbia, 68-60.

From start to finish, Pineau was on her game. The sophomore forward led all scorers with a career-high 22 points, and, at times, was unstoppable. She opened the contest with eight points in the first quarter, making quick work of the Lions’ (3-5) interior defense. By the game’s end, Pineau was a near perfect 8-of-9 from the floor. But when it came to the charity stripe, she couldn’t buy a basket. Pineau shot a mere 6-of-11 from the line, and served as the perfect case study for the entire Eagles (3-4) team—a group that made 44.4 percent of its field goals, but only converted 44.6 percent of its free throw attempts (10-of-21).

Thanks to a few Camille Zimmerman layups, Columbia was able to stay afloat in the first frame. But once the second began, the Lions’ offense stepped it up. In what was a quarter of runs, Columbia got things going with back-to-back 3-pointers. The mini 6-0 stretch swung the momentum back to the Lions’ side for the first time since they chalked up a 2-0 lead in the opening seconds of the game. But it wouldn’t take long for BC to fire back. Anastos and Emma Guy laid in a pair of baskets, and, soon after, freshman Sydney Lowery drilled a 3-pointer. Right on cue, Columbia responded, rattling off five consecutive points.

Before the break, Pineau continued to get the best of the Lions’ defense, scoring five of the Eagles’ final seven points, single-handedly giving BC a 29-27 advantage.

Similar to all three of their previous losses, the Eagles were outscored in the third quarter—but more so than usual. After trading field goals throughout the first half of the period, Columbia strung together another perimeter-oriented run. Maya Sampleton knocked down a 3-pointer, and, in due time, Abby Lee hit a mid-range jumper. Zimmerman capped off the scoring outburst with a layup on the break. In just a matter of two and a half minutes, a tie game turned into a three-score contest. Even though BC had time to make up ground, it never really recovered.

Pineau played hero ball in the final frame, matching her first-quarter mark with an additional eight points. The Australian native was the first on the board, converting an and-one layup. She sunk the free throw and, on the other end of the floor, rejected a Columbia shot. One possession later, Pineau was back at the line, netting two more free throws, and cutting the Eagles’ deficit to just four. Bolden-Morris hit BC’s lone 3-pointer of the half, and Martina Mosetti dialed up a timely jumper to keep head coach Erik Johnson’s team within striking distance.

But with less than three minutes to go, Lions guard Riley Casey knocked down a shot from behind the arc—a dagger of sorts. Once again behind seven, the Eagles went back to Pineau and Bolden-Morris. Unfortunately for BC, the two underclassmen failed to deliver. Pineau missed one of her two free throws, and Bolden-Morris misfired on both of her attempted 3-pointers. Guy, who finished with 11 points, and Lowery prevented Columbia from running away with a double-digit victory, but that’s about all BC could do as the clock wound down.

The loss marks the second time this season that the Eagles have fallen to an Ivy League opponent. At the moment, it’s hard to imagine that BC will fare any better against the ACC, let alone any team from the Power Five, in the coming months.