Gallagher’s ‘Who Built the Moon?’ Explores Desperation and Wonder

Noel Gallagher’s High Flying Birds have struggled to fly quite as high as Gallagher’s former Oasis bandmate and estranged brother Liam did in the past, but the High Flying Birds have found an original sound on their Nov. 24 released album Who Built the Moon? As suggested by the inquisitive title, the 12-track album takes listeners on a journey through exotic and unexpected sounds with a mix of sincerity and classic Gallagher sarcasm.

The first track, “Fort Knox,” finds the band in a state of urgency as a screaming, synthetic beat opens the track and is accompanied by the loud sound of jet engines overhead. Named for a U.S. military base in Kentucky, it is full of dire lyrics like “Keep on holding out” and “You gotta get yourself together” that suggest a need for defense. In an interview with NME, Gallagher cites an unlikely source of inspiration for the song, Kanye West’s “Power,” an intense masterpiece and a staple from the rapper’s illustrious discography. Gallagher’s take echoes the track’s repeating “Hey” throughout the song. The progressively busy beat is overpowered by the sound of an alarm clock in the middle of the song, signifying a call for action from Noel Gallagher’s High Flying Birds.

“Holy Mountain” follows the imposing opening track and takes on a light-hearted character. The band employs a stadium marching band sound with horns and a clap-along drum beat to create a simple, danceable hit. The lyrics of the song match the instrumental simplicity as the vocalist Noel Gallagher repeats “She fell, she fell, right under my spell” 15 times to complete the song. While the song acts as a likeable radio track, it seems out of place on the album that otherwise attempts to expand the band’s musical creativity and heighten the subject matter of an often trite genre.

A fast drumline accompanied by an equally energetic baseline sets the mood for the third track of Who Built The Moon?, “Keep on Reaching.” Mystical tones introduce Gallagher’s vocals, which chirp “Keep on running down that long black road / You’ll find sunshine and showers with love to behold,” a lyric that sounds like it was pulled straight from an upbeat, introspective poem rather than a rock song. The sounds of pep band trumpets frame the question “Can you keep a secret?” throughout the song to draw attention to the mysterious invitation. The track pays overt tribute to the Red Hot Chili Peppers’ popular cover of Stevie Wonder’s “Higher Ground,” a hit dominated by Flea’s legendary bass playing and the repetition of phrases like “keep on” and “highest ground.” The High Flying Birds solidify the allusion with lyrical allusions to soul and funk.

“It’s a Beautiful World” and “She Taught Me How to Fly” introduce an element of wonder and amazement to the eclectic album. The former relies on a techno drum beat and almost garish twinkling sounds to crystalize the song’s faux optimistic message in listeners’ heads. Verses including the lines “It’s a beautiful dream / A beautiful night” convey a positive message, but the distant delivery of the lyrics, combined with tawdry Space Age instrumentals and a random rambling breakdown in French, cause the listener to question Gallagher’s authenticity—a skepticism supported by the singer-songwriter’s history of sarcastic and condescending statements both in songs and interviews. “She Taught Me How to Fly” conveys a similar theme of astonishment, with lyrics like “She’s out to blow my-my-my mind.” The song differs in intent from “It’s a Beautiful World” due to the presence of more meaningful and sincere lyrics, like “Cause all the roads I run are coming back to you.” Despite the shift of tone, clichés such as “So put your money where your mouth is” and “I don’t mind if you don’t mind” prevent the track from transcending boring love song norms.

“Be Careful What You Wish For” and “The Man Who Built The Moon” are two of the most impressive tracks of the album from a strictly musical standpoint. “Be Careful What You Wish For” starts with a low acoustic guitar, then adds a wind chime-esque sound effect and a prominent, yet relaxed bassline that creates the effortlessly cool aura of the song. Combined with Gallagher’s change of vocal style from a loud scream to a calm near whisper, the song juxtaposes relaxation with unsettling lyrics like “They let you see their riches / They never tell you what you’re worth.” Similarly, “The Man Who Built the Moon” opens with a striking combination of dragging drum and screaming guitar, foreshadowing the dark lyrics of the song. The vocalist conveys regret with lyrics like “We never should have left town in the first place / Now we gotta walk like they talk in the rat race.” Perhaps Gallagher uses the track to vent about his personal disdain for fame and its crushing expectations.

Meanwhile, “Black and White Sunshine” and “If Love Is the Law” both take a backseat for the roadtrip through Noel Gallagher’s vivid world. “Black and White Sunshine” starts off strong with a powerful combination of strong drumline and versatile guitar chords. Despite a solid beginning, the song fizzles out by the time listeners arrive at the chorus due to an overall safe but uninteresting approach. The loud, screeching guitar chords that wind in and out of pitch are reminiscent of Pink Floyd. Lyrics like “Got nowhere to go / And any road will get us there” carry the regretful ballad through the story of “The Man Who Built the Moon” only to “Feel like he doesn’t belong.” “If Love Is the Law” attempts a happy-go-lucky sound with sporadic drum beats and a quickly-strummed acoustic guitar, but the subject matter is considerably darker. Gallagher tells of a man committing a crime against the laws of love while “high up on a ledge,” flirting with suicide.

“Interlude (Wednesday Part 1)” and “End Credits (Wednesday Part 2)” are the two instrumental songs that are caught in a limbo between warranting progressive rock acclaim and becoming elevator music in a mundane corporate building.

Perhaps the most enduring and timeless song on the album is the bonus track “Dead in the Water,” a live recording for BBC Radio 4 done in Dublin years prior to the album. The track is beautiful in both sound and content—the lone acoustic guitar and piano create an excellent frame for the image of a love lost at sea. The chorus croons “Let the storm rage, I’d die on the waves / But I will not rest while love lies dead in the water.” The comparison of lovers at a standstill to a ship stuck in the eye of the storm at sea is fresh and well constructed by Noel Gallagher’s High Flying Birds. 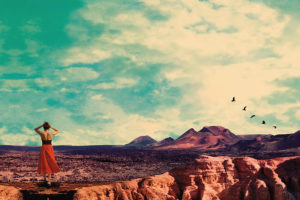