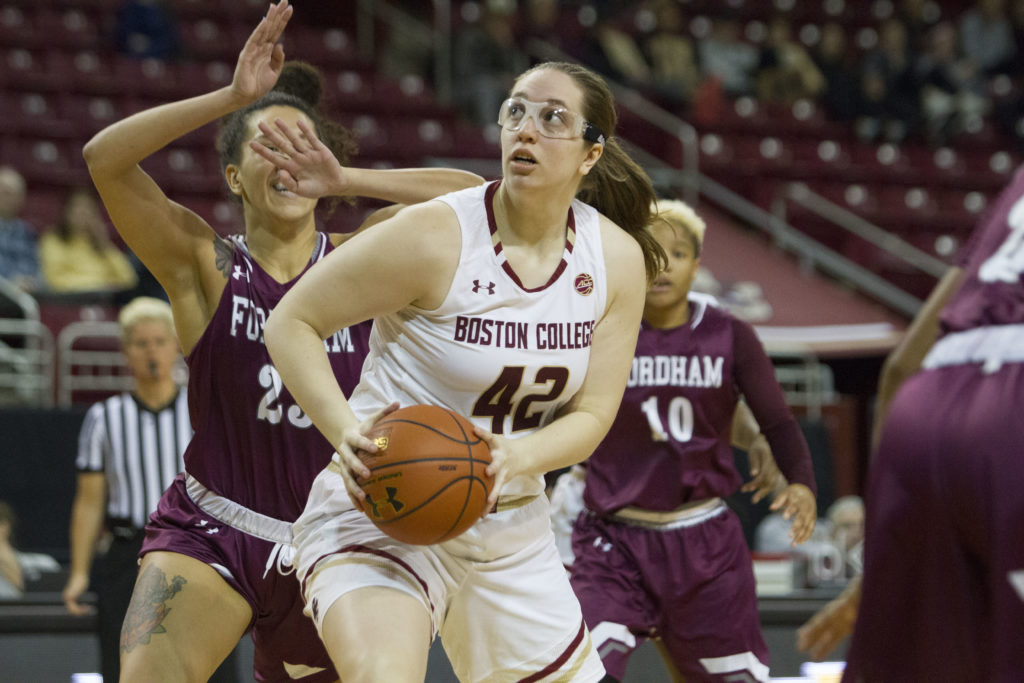 The last time Boston College women’s basketball (3-5) faced Holy Cross (3-4) was in November 2015, as the Eagles extended a three-game win streak—their first to start a season since 2010-11. While maintaining a comfortable 15-point lead in the last seven minutes of the game, BC held the Crusaders to just one field goal in the last three minutes and 15 seconds. On Wednesday night, Holy Cross has an opportunity to avenge that loss on its home court.

Worcester, Mass., The Hart Center at the Luth Athletic Complex

Wednesday’s game will be streamed live on the Patriot League Network.

1)    Boston College Women’s Basketball recorded a season-high 51 rebounds on Sunday against Fairfield (3-5). Despite a loss, the team dominated both the offensive and defensive glass.

2)    Freshman Milan Bolden-Morris leads the Eagles in points this season, scoring a total of 103, and averaging 12.9 per game. Bolden-Morris is followed by fellow freshman Sydney Lowery, with a total of 89 points and 11.1 per game.

1)    In the Crusaders’ last matchup on Sunday against Albany, sophomore Lauren Manis logged 18 points and 12 rebounds, marking her third double-double of the season, and the 11th of her career, not to mention her 7-for-8 shooting performance from the free throw line.

2)    Manis has led the team in scoring in five of Holy Cross’s last seven games with at least 18 points per game, in addition to out-rebounding her teammates in four of the last seven games.

3)    This season, the Crusaders have averaged 71.0 points per game and are shooting 38.7 percent from beyond the arc. On average, they are converting 7.7 triples per game.

The Eagles and the Crusaders last faced each other at Conte Forum in Chestnut Hill on November 18, 2015. Despite turning the ball over 13 times, BC prevailed, 60-51, in large part due to the fact that its bench chipped in a total of 23 points.

Bolden-Morris continues to step up and reach double digits. Lowery must also have a good game, joining Bolden-Morris atop the box score. If the two freshmen cannot continue their success against the Crusaders, sophomore Taylor Ortlepp will need to fill in their shoes. Defensively, the Eagles must keep up their recent edge on the boards on both ends of the floor.

The Eagles cannot find a way to limit their turnovers, and if they are unable to stop Manis. The sophomore has been a key player for the Crusaders this season, and could provide matchup problems for BC inside, given her 6-foot-1 frame. Since the Crusaders have shot the ball well from the perimeter this season, the Eagles must also be ready to defend the 3-point line, in order to prevent open shots.