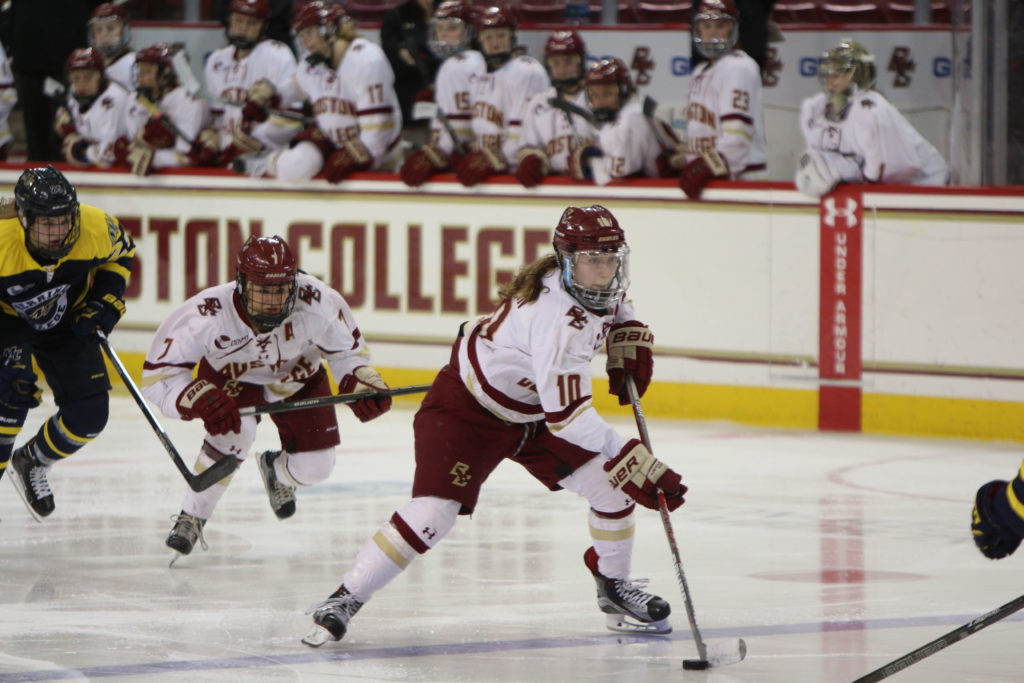 Following the second period of Monday’s NHL Winter Classic at Citi Field between the New York Rangers and Buffalo Sabres, U.S.A. Hockey announced the complete rosters for its men’s, women’s, and paralympic teams for the upcoming 2018 Winter Olympics in Pyeongchang, South Korea.

For the first time since 1994, active NHL players will not be allowed to participate in the games. Still, no current Boston College men’s skaters made the cut, and only one former Eagle is listed as member: Brian Gionta. It just so happens that he is one of, if not the, most important player on the roster.

Gionta, who during his 17-year professional career captained both the Montreal Canadiens and Buffalo Sabres, will assume the same role in South Korea. He is the only skater on this year’s team that has any Olympic experience. In 2006, Gionta led Team U.S.A. with four goals in six games in the Torino, Italy games. Prior to his NHL and international playing days, Gionta posted four 50-point seasons and won the 2000-01 national championship at BC, in addition to serving as a team captain during his senior season. Today, he remains the Eagles’ all-time leading goal scorer (123 goals) and ranks second in points (232 points).

While BC’s women’s program might not have produced a team captain, it did send the largest contingent of Eagles to the Olympics in school history. Of the 23 players to book their ticket to the Pyeongchang, five are either current or past BC skaters. The crop of Eagles is headlined by freshman Cayla Barnes, who was added to the national team in late October, and juniors Megan Keller and Kali Flanagan, who opted to take a year off from the program to train with U.S.A. Hockey back in May.

Barnes, a three-time member of the Under-18 Team, is the only player in IIHF Women’s Under-18 World Championship history to win three gold medals. At just 18 years and 11 months of age, she is the youngest player on the 2018 U.S.A. Olympic Team roster. Keller—the 2017 Hockey East Player of the Year—is as versatile as it gets. Not only is she a lockdown defender, but she’s also a reputable scorer, ranking first among all defensemen for the second-straight year with 39 points last season. On perhaps an even more impressive note, Keller is just 12 points shy of cracking BC’s top 10 on its all-time scoring list. Flanagan has a ways to go to catch up to Keller, but is ninth among all Eagles defensemen in points, eighth in goals, and 11th in assists.

The final two BC players on 2018 U.S.A. Olympic Team are two-plus years removed from their college hockey careers: defensemen Emily Pfalzer, BC ’15 and forward Haley Skarupa, BC ’16. Pfalzer, who made her full national team debut in 2014, served as the Eagles’ captain during her senior season (2014-15). After four years on the Heights, she became the 13th player in program history to record at least 102 points. Coupled with Barnes, Keller, and Flanagan, Pfalzer and the Eagles account for more than half of the 2018 Olympic Team’s defensemen. Skarupa was added to the 2017-18 National Team roster in late November and edged out Alex Carpenter, BC ’16—the Eagles’ lone recipient of the Patty Kazmaier Award and one of three of BC women’s players to participate in the 2014 games—for a spot on this year’s squad. She is the Eagles’ second all-time leading scorer (244 points).

Neither Team U.S.A.’s men nor women have won an Olympic gold medal in the 21st century. Gionta, Barnes, Keller, Flanagan, Pfalzer, and Skarupa will play a big role in deciding just how far their respective teams advance in the 2018 games.