In its last game before the Beanpot, Boston College men’s hockey traveled to Hartford, Conn. on Thursday night with four-game win streak over the Huskies on the line and a lot to prove. After a decisive win over Massachusetts Lowell last weekend, the Eagles were determined to show that their previous offensive explosion wasn’t just a fluke.

But for the first time in four years, UConn got the best of BC. The Huskies jumped out to a two-goal lead less than seven minutes into the first period and never looked back, holding on for a 5-3 victory—the Huskies’ fourth in a row.

UConn (12-16-2, 9-11-1 Hockey East) dominated the first 10 minutes of play, quickly clearing the puck from its zone and capitalizing on scoring opportunities. Even though the Huskies frequently infiltrated Eagles territory, they were the first ones to go the box, as Kasperi Ojantakanen was called for high-sticking four minutes into the game.

No. 16 BC (13-11-3, 13-6-0) struggled to generate scoring chances during the first half of the power play. Luckily for the Eagles, they were about to get a little bit more help: Less than two minutes later, Adam Karashik was issued a holding penalty, gifting BC a 5-on-3 advantage. Still, even that wasn’t enough to get the Eagles on the board. Instead, the Huskies drew first blood.

As soon as Ojantakanen exited the box, he tracked down the puck and sprinted toward Eagles netminder Joseph Woll. With Corey Ronan to his right, Ojantakanen rifled a shot on net. Woll made the stop, but soon after, Ronan came swooping in, rebounding the shot and scoring a shorthanded goal to give UConn the lead.

All of 28 seconds later, the Huskies lit the lamp again. This time, Benjamin Freeman beelined for the point, alongside a few of his linemates. Rather than whipping a shot on goal, the sophomore dished the puck to Spencer Nass, who wristed one past Woll. Despite the defIcit, the Eagles weren’t deterred. In fact, they fired back in just 19 seconds. After receiving a pass from Christopher Grando, Julius Mattila ripped a shot that hit off UConn goaltender Tanner Creel and trickled past the goal line. In the last eight minutes of the period, BC took charge of the puck and kept it in UConn’s zone, but it couldn’t get past the Huskies’ defense to tie up the game and headed into the locker room trailing by one.

The second period was rife with penalties. Right off the whistle, Graham McPhee pushed the puck behind Creel, only to be checked into the boards by Derek Pratt, who was promptly called for charging. The Eagles’ one-man advantage was short-lived, thanks to a David Cotton holding penalty, his 10th of the kind this season. Neither team could make a move on the other, and the game returned to full strength. It wasn’t long before BC was back on the power play, though. After Casey Fitzgerald took a spill, Joseph Masonius was sent to the box for tripping. Less than 30 seconds later, Brian Rigali joined his teammate for interference. Despite the two-player advantage, BC continued to come up empty on the offensive end of the ice.

As the Eagles were playing out the second penalty, they finally found their mark. Following a back-and-forth exchange, Michael Kim set up Mattila for a one-timer goal, his second scoring play of the game. BC controlled the puck for much of the second period, but it couldn’t beat Creel. Eventually, UConn tipped the scale, and Max Letunov pocketed the Huskies’ third goal of the night, right before the end of the frame.

The Eagles had a one-player advantage heading into the final 20 minutes of play after Nass was flagged for UConn’s seventh penalty of the night in the waning seconds of the second period. But it didn’t matter—BC’s power-play magic was gone. The Huskies quickly killed the penalty and snapped back into their first-period form.

Like it has been of late, the final frame proved difficult for the Eagles. Kim was sent to the box for playing with a broken stick after falling on the puck in a scrum a few minutes into the period. Fortunately for BC, the Huskies’ power play was short-circuited when Alexander Payusov was caught in the act of tripping. The late penalty didn’t faze the Huskies, though, and Ronan tallied his second goal of the night with a wrister from the circle just six seconds before Kim was due to return to the ice. The Franklin, Mass. native used McInnis as a screen, shielding Woll’s line of vision, as he delivered the shot.

After a UConn turnover, J.D. Dudek cut the Eagles’ deficit to just one with seven minutes left to play. That said, the late goal hardly swung the game’s momentum, and BC found itself playing catch up the rest of the way. The Eagles took out Woll with under two minutes to go, but the extra reinforcement backfired, as UConn recorded an empty net goal to complete the upset.

With the Beanpot and a rematch with UMass Lowell on tap, the Eagles needed to steal this game on the road. Now, a loss to Northeastern on Monday—essentially a two-point swing in the conference standings—could severely threaten the Eagles’ first place hold atop Hockey East. 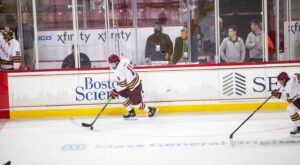