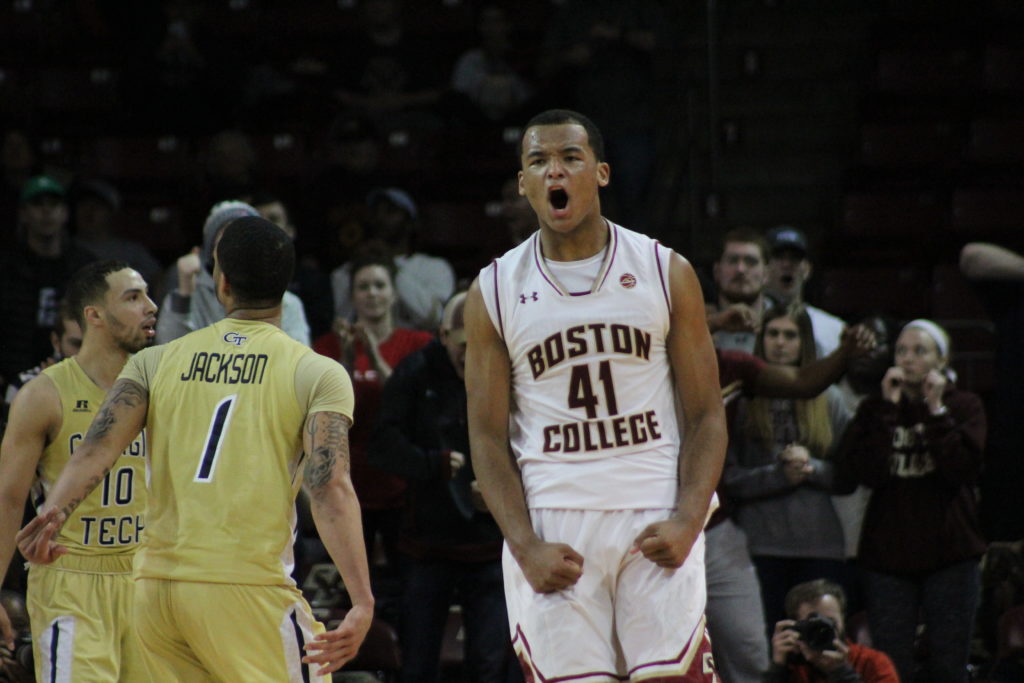 What do the Boston College men’s basketball team and the New England Patriots have in common? On this Super Bowl Sunday, more than one would think. Hours before the Patriots are set to take on those other Eagles from Philadelphia in Super Bowl LII, Conte Forum hosted a thrilling opening act that saw Boston College (14-9, 4-6 Atlantic Coast) take down the Georgia Tech Yellow Jackets (11-12, 4-6) in overtime, 80-72.

The contest featured a remarkable resemblance to last year’s big game, seeing the New England-based Eagles taking on the Yellow Jackets who call Atlanta home. Boston College did not quite have to surmount a 28-3 deficit, but Georgia Tech took their largest lead of the game in the first half by going up 28-15. BC worked back to cut the deficit and sent the game into overtime, just as they did Wednesday night versus Virginia Tech. The Eagles, however, like last year’s Patriots, came out on top after a stellar overtime period on Sunday afternoon. With Ky Bowman doing his best Tom Brady impression, Jim Christian’s crew snapped their three-game losing streak, doubling up on last year’s total with their fourth ACC victory.

The sophomore guard stepped up when his team needed him most on Sunday, after his partner-in-crime Jerome Robinson fouled out with 3:12 to play in the second half. After connecting on three triples in the first half, Bowman was held scoreless in the second half, but he elevated his game and took over in overtime. He scored eight of his 17 points in the extra frame, pulled in three rebounds and added a steal. Bowman took great care of the ball throughout, committing zero turnovers in overtime and just three in the game. With Robinson sidelined, he attacked the hoop and drew defenders. Bowman’s athleticism helped him finish in traffic with the points that BC needed to pull this one out. The point guard impacted the game with more than just scoring, grabbing eight rebounds and improving on the outstanding 7.0 rebounds per game mark he entered Sunday with. He shot 6-of-13 for 46 percent from the field, which isn’t phenomenal, but it is higher than his season-average. It marked just the second time in his last five games that he eclipsed 36 percent on field goals.

Jordan Chatman struggled on Wednesday night, hitting just one of his five 3-point attempts and finishing with just six points. On Sunday, though, the marksman returned to his normal form, catching fire from deep in the second half. He connected on four 3-pointers after missing his first six shots, enabling the Eagles to storm back and cut the deficit. The team shot an exceptional 11-of-23 from beyond the arc, an advantage it desperately needed. Steffon Mitchell hit a timely 3-pointer with 35 seconds left to play, tying the game at 69 and sending the game to overtime. The Eagles also played much better 3-point defense than they have in the past couple games. BC has struggled with closing out on shooters, a product of chasing penetration and leaving the arc open. GT, however, was not able to get up many open triples in this one, making just five of 14. BC was able to put together possessions where it played strong defense for 30 seconds and forced contested threes at the end of the shot clock.

The Eagles turned the ball over 13 times on Sunday, matching their season average. The Yellow Jackets also coughed up the rock 13 times, giving the Eagles a turnover margin of zero. It may not seem like it, but this is both significant and encouraging for BC fans because negative turnover margins have plagued the Eagles all season. Coming into this game, they’d lost the turnover battle in 15 of 22 games. They were able to overcome these struggles against lesser competition, but they are just 2-5 in the ACC when losing the turnover battle. In ACC play, every possession is valuable, and the Eagles did a good job on Sunday of controlling the ball and forcing GT turnovers down the stretch.

The Eagles struggled to contain the Yellow Jackets’ interior attack all afternoon, as they were outscored in the paint, 22-8, in the first half, and 38-26 overall. The drawback of BC protecting the 3-point line is that it left numerous driving lanes open. GT’s talented group of guards was able to work its way into the paint for easy finishes or dishes to open big men underneath the hoop. Too many layups went uncontested for a GT frontcourt that matched up practically equally in size with BC’s. GT big men Ben Lammers and Abdoulaye Gueye often had strong post position, which led to more easy buckets in the painted-area. The Eagles need to improve at making big men catch the ball in the post further from the basket, making these shots tougher.

BC is a much stronger second half-team than a first-half team, and its streaky shooting can always create quick runs, but this kind of double-digit deficit is becoming an all-too-familiar story. Today’s game marks the fourth time this season that the Eagles have come back from a 10-plus point deficit to win a game, which is impressive and displays the team’s never-say-die mindset. But if they could take these prolific runs and use them to extend leads instead of cut into massive deficits, they’d have a better chance at pulling out the close games that they’ve lost in this fashion, such as the nail-biting games against Clemson, Louisville, and Virginia Tech.

BC scored zero fast break points on Sunday, which is certainly an area where it can improve. Few people can keep up with Bowman and Robinson in the open court—both are speedy guards that enjoy crashing to the rim. This, along with Chatman’s ability to spot-up and Mitchell’s speed as a stretch four, seems to constitute a formula that would create more easy baskets in transition. While BC has had issues with turnovers as mentioned before, pushing the ball in transition while the defense is not set presents plenty of scoring opportunities for the Eagles, especially because it suits Christian’s team’s skill set.