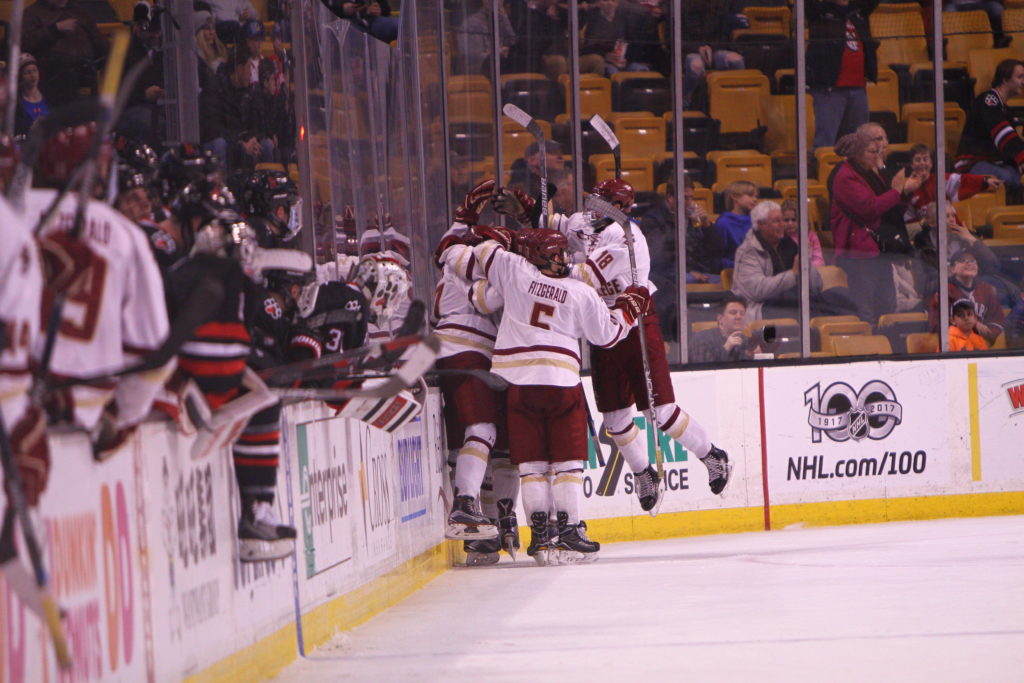 Nine, eight, one, zero—these numbers represent the number of Beanpot championships in the twenty-first century for Boston College, Boston University, Harvard, and Northeastern men’s hockey, respectively. This lopsided statistic has shown just how dominant the Eagles and Terriers have been in recent years, but it was only last year that the Crimson were able to claim their first title since 1993. In the past three years, these three teams have all won the Beanpot. You have to go back to 1988 to find the last time the Huskies were able to boast the same achievement. But, as the only USCHO Top 15 team coming into the Beanpot, Northeastern is the favorite to win it all. Despite this, all four teams rank within the Top 25, and it wouldn’t be surprising to see this being the most exciting Beanpot since 2015—a tournament that featured three overtime games and another title for BU.

With no true star—or a lot of experience, for that matter—on the team, the Eagles (13-11-3, 13-6-0 Hockey East) have been led by play from their younger starters. Sophomores Graham McPhee, Julius Mattila, and David Cotton are the three leading goal scorers on the team, and freshman Logan Hutsko has certainly done his part with five goals and 12 assists. Overall, BC has 13 skaters currently with double-digit points, a sign of great depth. However, this hasn’t produced consistent results. The Eagles have allowed more goals than they have scored this season and have a goals-for average that currently ranks in the bottom half of the NCAA. BC is uncharacteristically just two games above .500, and has yet to win a game on neutral ice this year. With just one win their past three games, the Eagles come into TD Garden searching for momentum. BC was knocked out of the Beanpot in 2015 by the Huskies the last time the two faced off, but was also victorious in the title game against Northeastern the year prior.

The question all Husky fans are wondering is if this is finally their year. Northeastern (15-7-5, 11-5-3 Hockey East) suffered devastating Beanpot title losses in overtime in 2005, 2011, and 2015, and has lost the last nine times it has have been in the championship round. Before getting there this year, though, it must beat the Eagles. To do so, the Huskies will rely on goaltender Cayden Primeau, who ranks eighth in the country with a 2.01 goals against average. Primeau has started 11 games allowing one goal or fewer and has been a huge factor in the Huskies’ success this year. On offense, Northeastern is led by Adam Gaudette and Dylan Sikura. Gaudette is tied for the most points this season with 39, and Sikura is not too far behind with 36 of his own. Gaudette has scored eight of his 19 goals on the power play, and he is the key reason why the Huskies are one of the best teams with a man-advantage in the country. Their conversion rate of 26 percent is tops in Hockey East, and if the Huskies are to win their first title in 30 years, the man-advantage will be the reason why.

With six skaters above the 20-point mark, the Terriers (14-11-2, 10-7-2 Hockey East) boast some of the most consistent forward play in all of college hockey. Bobo Carpenter’s name may not strike fear into the hearts of his opponents, but his 16 goals in 26 games certainly does. BU’s leading scorer has an impressive shot conversion rate of 19.5 percent, and has five multi-goal games. If the junior from North Reading, Mass., can get just one goal early on against Harvard, he’s more than likely to stay hot the rest of the way. Along with Carpenter, Shane Bowers has had an incredibly successful season. The freshman has 13 goals this year, tallying in each of his past three games. As a team, the Terriers have not lost in their past seven games, riding a five-game winning streak into the Beanpot. BU has a 1-3 record against the rest of the field, but certainly has the chance to do some damage.

Despite being the defending tournament champions, the Crimson (10-8-4, 9-5-3 ECAC) come into the tournament as the underdogs. They have the lowest USCHO ranking of the four teams, and are certainly not the same team as last year. The only player who has played at a high level since that win, however, is Ryan Donato. The junior leads the nation with 21 goals and has nine assists to go with it. Other than Donato, though, Harvard has struggled to generate an offense. Donato’s 124 shots this season are 59 more than anyone else on the team, and the team has just an 14.8 percent conversion rate on the power play. To make matters worse, Donato will be playing for Team USA in Pyeongchang, South Korea—he will not be able to play in the second round on Feb. 12. Just like BC, Harvard comes into the Beanpot having lost two of its last three. BU isn’t the most formidable first round opponent for the Crimson, but it seems more likely that they’ll be in the consolation round rather than returning to the title game.