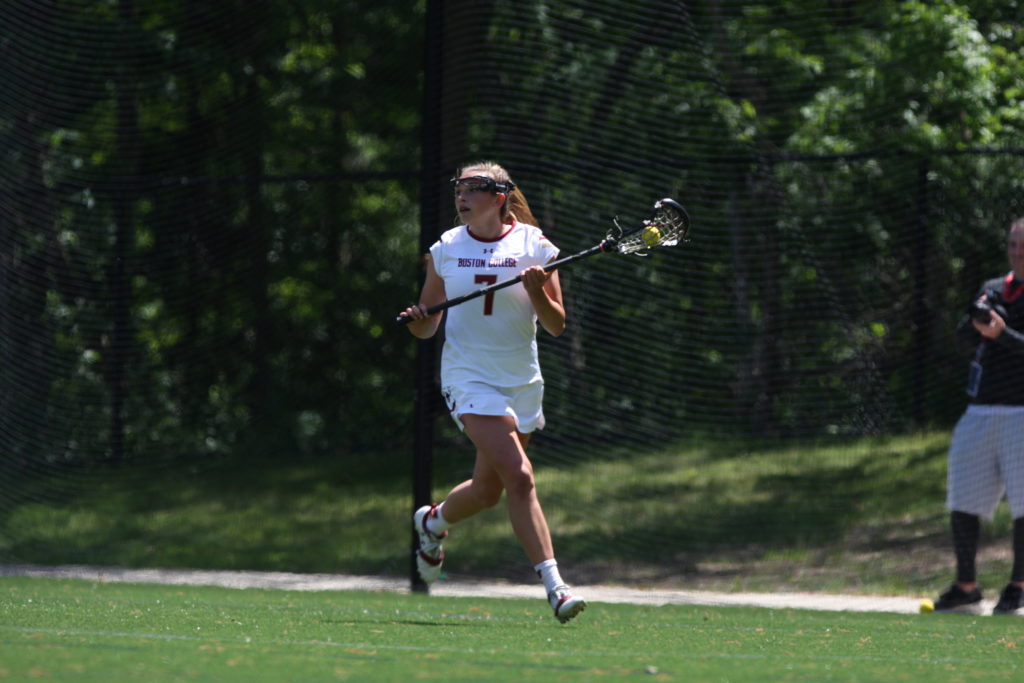 Led by Hart, Eagles Outlast No. 15 Irish in Season Opener

Kaileen Hart kicked off her senior season in style.

The captain of Boston College lacrosse scored four goals and added an assist in the season opener, lifting the Eagles over Notre Dame, 13-11. Two tallies on either side of halftime from the attacker were the difference, while Dempsey Arsenault added a hat trick of her own and returning 80-goal scorer Sam Apuzzo chipped in two goals and two assists to seal the victory.

That’s not to say that the result was never in doubt.

In fact, No. 15 Notre Dame (0-1, 0-1 Atlantic Coast) scored the first two goals of the game and held No. 6 BC (1-0, 1-0) off the scoreboard for the first 11 minutes. The Fighting Irish’s Maddie Howe and Nikki Ortega, both of whom would finish the game with hat tricks of their own, found the back of the net twice within the span of a minute to give them an early lead. Assisting on both goals was Savannah Buchanan, who scored on both of her shots for a total of four points.

For the first 10 minutes, the Irish won every race to every ground ball and every draw-control, controlling the vast majority of possessions. The Eagles looked far from the team that had been in the National Championship the previous season.

A BC fan would’ve expected to see either Apuzzo or Hart step up and swing the momentum in the Eagles direction—Apuzzo was coming off a dynamic offensive season, and Hart had a breakout junior year—but instead of following the script, it was sophomore Sheila Rietano who sparked the offense.

Irish goaltender Samantha Giacolone made two of her 15 saves in quick succession before Rietano gathered herself. The sophomore slashed to the front of the net and snapped the first goal of her career past Giacolone, putting BC on the board for the first time with an excellent individual effort.

A minute later, it was time for Hart to put on a show, notching an unassisted goal of her own. Starting from behind the cage, she sped past a defender and ripped a shot past Giacolone to tie the game at two.

This minute of excellent lacrosse revealed the potential Eagles have this year. After a slow start where it couldn’t have looked less like it did a year ago, BC nabbed two goals on four shots in a lone minute. The Eagles’ explosive offense—ninth in the country last season—had quickly found its footing.

On the other hand, Notre Dame was far from done. The two teams began to trade goals back and forth with 17 minutes to go in the first half. Ortega and Apuzzo scored back-to-back,the latter grabbing her first with some beautiful dodges through two defenders to open up the sliver of space she needed. The Irish’s Molly Cobb answered with a free position chance, while Arsenault, Buchanan and Tess Chandler all found the back of the net for the first time. Finally, Katherine Enrietto put Notre Dame up a goal with 6:21 to go in the frame. Ten minutes, seven goals: A 6-5 score.

The breathless first period started to turn in BC’s favor when Arsenault sprinted past her defender and squeezed the ball past Giacolone for her second goal of the game, which came with just over five minutes remaining. A minute later, Hart grabbed her second tally to put the Eagles out front for the first time all game. The Eagles wouldn’t trail for the rest of the contest, and entered halftime up, 7-6.

The Irish opened the second half scoring, as Jessi Masinko found twine right away. But the game was not tied for long. A bit more than a minute later, Apuzzo scored her second, deking out a defender and whipping a shot low and in. Hart then took control, scoring with just over 19 minutes remaining to seal a hat trick and then assisting on Arsenault’s hat trick effort just over a minute later later. Apuzzo’s passing also created goals for Emma Schurr and Ally Mayle, building a comfortable five-goal lead that essentially guaranteed the final result.

Notre Dame went on somewhat of a run, scoring four times before time expired, including goals from Buchanan, Howe, and Ortega, but Hart logged her fourth to keep the game out of reach.

All in all, BC has to be happy with the way it started the season. Holding the Irish without a goal for eight minutes while the Eagles notched five tallies of their own showed the defensive potential this team has, an important supplement to its offense.

This wasn’t a standout performance for their goaltender, Lauren Daly, though, as she let in 11 goals and only made six saves. If Daly improves her play as the season rolls on, BC is in a great position on both ends of the field to pick up right where it left off last year.

No matter what, it looks like the Eagles’ high-powered offense is back, and Kenzie Kent hasn’t even returned to the team yet since the women’s hockey season is still ongoing. A promising start is all head coach Acacia Walker-Weinstein could have asked for on the road to start 2018, and although there are still areas for the Eagles to improve upon, they’ve certainly laid the groundwork for a successful spring season.