Home » Notebook: Impressive Second Half Ends Road Skid for BC 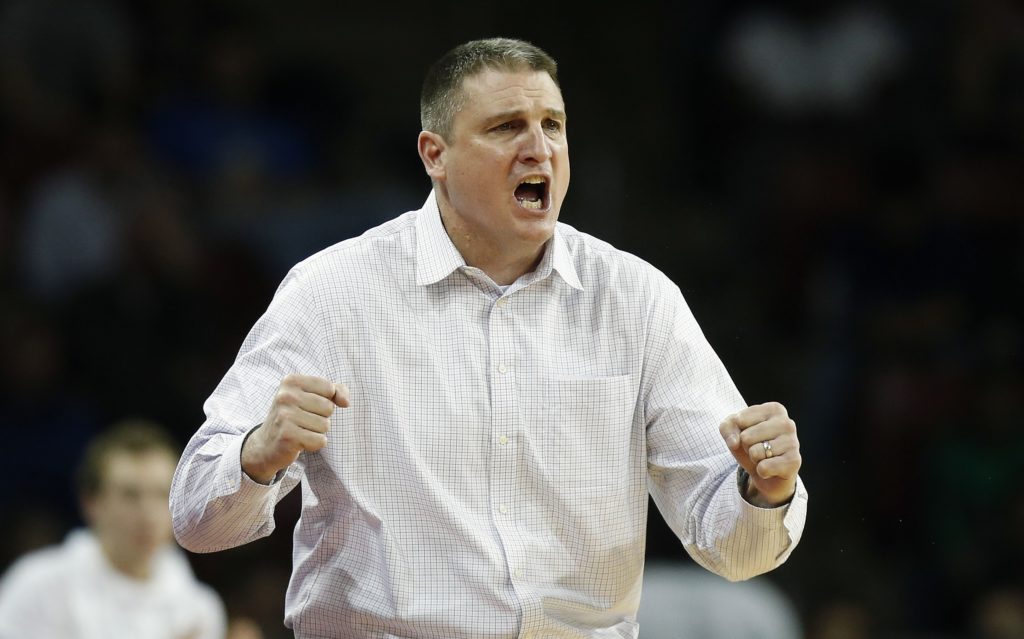 Notebook: Impressive Second Half Ends Road Skid for BC

Boston College men’s basketball ended a 23-game ACC losing streak on Tuesday night, rallying from a two-point halftime deficit to hand Pittsburgh its 14th-straight conference loss by a score of 81-58. Here are a few notes from the Eagles’ elusive road win.

A Tale of Two Halves

Pardon the cliche, but the first and second half could not have been more different. The Eagles trailed by two points at the break after shooting just under 29 percent from the field and conceding an abundance of open looks on defense. Pittsburgh knocked down 5-of-8 from beyond the arc, offsetting BC’s huge advantage on the glass.

Additionally, Jerome Robinson picked up three fouls—including a technical—as the Panthers built a lead as large as 15 in the opening half. From the end of the first on, though, it was the Eagles’ game. They closed the half on a 19-6 run to pull within two, and then cruised in the second.

Robinson heated up rapidly, scoring 23 of BC’s 27 points during a 13-minute stretch , including 15-straight points. He finished with 27, breaking the 20-point mark for the fifth time in six games. Meanwhile, Jordan Chatman knocked down five 3-pointers, including two in the second half, en route to a 17-point performance. The Eagles shot over 60 percent in the latter portion of the game, a startling number. They also forced nine more turnovers (after the Panthers posted 11 in the first), taking advantage with 21 points off of turnovers.

In the second half, a noticeable improvement on offense for the Eagles was the way they worked the ball from high to low. Steffon Mitchell served the middleman role perfectly on several occasions, piling up five assists in the final 20 minutes alone. Look at how this play sets up, for instance.

Bowman has the ball at the top of the 3-point arc, holding it over his head. He has Mitchell at the free throw line, and a lurking Nik Popovic just outside of the paint. The Panthers are running a clear 2-3 zone, and the play works to perfection. Because Pittsburgh center Terrell Brown committed to Mitchell and the rest of the back three realized too late, Popovic was left open down low for the layup.

It wasn’t just the big men down low who found success, though. Robinson finished with 12 of his 29 points coming from mid-range jumpers, a high mark for the guard as he hit a lone 3-pointer. He was able to pick apart the zone with consistency and find open looks. Chatman set him up between the paint and the 3-point line in one such play, and the result was as predicted.

“I had a pretty good feeling they were only going to play zone with a one-day preparation,” Eagles head coach Jim Christian told ESPN News afterward. “In the second half we were able to get Jerome in the middle of the zone and I think that really hurt them. That got him going.”

Not only did BC outrebound its opponent for the fifth game in a row, it thoroughly dominated down low. The Eagles finished with a plus-21 mark, only topped by the win over South Carolina State back in November (plus-25). They also posted an 18-2 edge in offensive rebounds, leading to 14 second-chance points to the Panthers zero.

“I thought that was an advantage for us,” Christian said of the size down low. “We could be a little more physical [with them].”

Popovic made a name for himself in the paint, grabbing 14 rebounds, a career-high. Three other Eagles grabbed six-plus boards.

The point has been hammered home time and time again, but BC is incredibly reliant on its starting five. On Tuesday, when Robinson went to the bench with seven minutes left, Pittsburgh fans likely sighed a breath of relief. Surely the Panthers could build some breathing room against a team ranked 350th in bench minutes, then hold on in the second half.

Vin Baker, Jr. had something to say about that. The freshman played 11 minutes and scored a career-high 11 points, finishing plus-3 on the scoresheet. Johncarlos Reyes added a plus-four rating in nine minutes as well, while Avery Wilson scored four points in garbage time.

Sure, it was against the last-place team in the conference, but Baker, Jr., who has shown promise at times this season, was productive as ever. Meanwhile, Reyes again showed that he could be a consistent player off of the bench. Overall, the 19 bench points scored by BC are a good sign moving forward for a team with several surely-fatigued starters.

The Midst of a Rebuild

A few days before heading to Pittsburgh, Christian had high praise for Panthers coach Kevin Stallings. After all, he was in a similar position just a few years ago, watching his team post a winless ACC record. When asked about how his situation compared, he gave a thoughtful answer on the difficulties of the conference and how hard it is to rebuild.

“I think it’s numbers,” Christian said. “The one thing you can’t argue with is numbers. After my first year here, I had nine available scholarships and you only get 13. I think they had 10 new guys. This is a very hard league to rebuild in. When you have to sign nine or 10 players, it’s hard to find that many great players whether they be young or older.”

What changed for the Eagles? Impact players, as Christian went on to put it. He pointed to the impact of landing players like Robinson and Bowman and retaining them, and how the slow, steady process brings you back into contention.

“That was our situation,” he said. “We just believed in our plan, and it’s starting to come to fruition. They learned from their experiences and gained more confidence as they had successes. Eventually, it works.”

For Pittsburgh, those impact players might be the likes of sharpshooting guards Jared Wilson-Frame and Parker Stewart, who finished 1-2 on the team in scoring, with 16 and 11, respectively. The duo combined for seven 3-pointers, leading the Panthers to the slim two-point lead at halftime.