Lately, Marvel movies have lost their confidence. Last year’s Spider-Man: Homecoming needed to borrow Robert Downey Jr.’s star power by featuring Iron Man in both the movie and the promotional material. Thor: Ragnarok succeeded by being a parody of its previous two iterations. Marvel has sensed a declining interest and has attempted to revitalize itself by putting ironic distance between it and its superheroes. The earnest optimism that permeated the early Marvel Cinematic Universe is going out of fashion. Perhaps the Marvel powers that be sensed the cultural importance of the first truly blockbuster superhero movie starring a black superhero and are returning to form. Black Panther, directed by Ryan Coogler, does not just deliver a good episode of Marvel’s blockbuster-sized silver screen TV show—it crafts a genuinely great film with the courage to stand on its own with a compelling story, setting, main cast, and message.

Black Panther tells the story of T’Challa (Chadwick Boseman) who, after his father’s death, becomes the Black Panther as well as the king of Wakanda, an advanced but secret nation in Sub-Saharan Africa. All seems well, but when a dangerous new enemy with a mysterious backstory challenges his ascension to the throne, T’Challa must confront the mistakes of his nation’s past to restore order.

The first thing to praise is the depiction of Wakanda, crafted not with connections to other films (usually involving some glowing crystal an alien wants for some reason), but with some good old-fashioned world-building to create its absorbing depiction of Afrofuturism. Thanks to a neverending reserve of an extraterrestrial metal called vibranium, Wakanda is far and away the most technologically advanced nation on the planet. Its self-sufficiency translates to a peaceful yet secretive way of life that it maintains through the facade of poverty it displays to the rest of the world. Undisturbed by other nations for thousands of years, African tribal culture and rituals are still seen as utterly modern. Elements of science-fiction and fantasy all feel fully grounded in Wakandan culture. It’s fascinating that in a shared cinematic world of galactic possibilities, this small nation in Africa is most worth spending time in.

This sense of place is populated by a fantastic ensemble cast of characters. T’Challa breaks the Marvel mold of cocky, quipping protagonists by being a an earnest, soft-spoken man with desires and insecurities. Most of his progression is directed to becoming the King of Wakanda by balancing his desire to help other nations with his duty to protect his homeland. Despite how excellent the protagonist is, the ensemble cast helps this movie really shine. This is a film where the main character’s absence for a long stretch of time is barely felt. His royal guard Okoye (Danai Gurira), is a stand-out role. Her fierce, honorable, and funny character will garner as many (if not more) fans as Black Widow did in The Avengers. Letitia Wright’s performance as T’Challa’s sister Shuri also proves to be a star-making role. She injects life into a warm relationship with her brother in addition to standing out as an optimistic scientist with endless humor. Most importantly, Marvel has finally produced a genuinely great villain with Erik Killmonger, played by Michael B. Jordan. Jordan helps bring this intimidating, charismatic, and intelligent villain to life, but much of his character’s greatness is right in the screenplay. His backstory and ideology create a truly compelling character, who is the perfect challenge not only for T’Challa, but the audience as well. Numerous other performances round out this great cast, with Andy Serkis playing a maniacally funny villain, Lupita Nyong’o playing T’Challa’s love interest and moral conscience, and Martin Freeman nailing an American accent.

The overall direction of this film is fantastic as well. At only 31, Coogler continues to establish himself as a real directing talent, having previously helmed Fruitvale Station and Creed. His young voice was already an immense talent and cultural herald before this movie, and he does not slow down here. The cinematography is visually stunning, despite a few overusages of CGI (particularly during the third act). The action is creative and satisfying, often including fight scenes out of costume which have more weight and tension. Jokes don’t compromise dramatic moments like they normally do in other Marvel movies, but instead serve to further flesh out the characters and universe. Hopefully this kind of direction sets the tone for the rest of the MCU. If not, Coogler still has a bright future ahead.

The only serious thing holding this movie back is its pacing. The first half of the movie mainly revolves around a MacGuffin that has little to do with the rest of the film. The film apparently did not have the confidence to delve straight into the most interesting conflict: T’Challa’s guilt versus Killmonger’s hatred.

When compared to the entirety of the film, these are small complaints. This movie succeeds in places Marvel movies usually struggle with, from character to setting to tone to the impact of its message. This film is not only a cultural touchstone, but a great film in its own right. 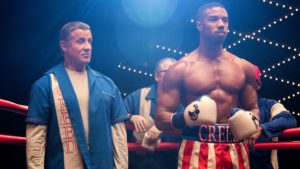