Home » Eagles Pull Away in Second Half, Defeat No. 5 UNC for First Time Since 2015 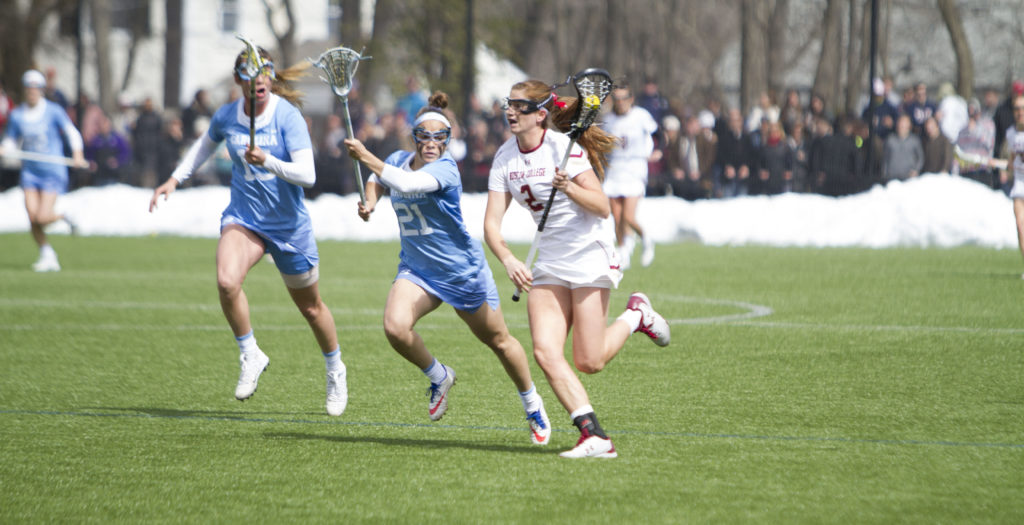 Eagles Pull Away in Second Half, Defeat No. 5 UNC for First Time Since 2015

With only 10 and a half minutes left in the first half of Saturday afternoon’s top-five matchup between Boston College lacrosse and North Carolina, the Tar Heels rattled off three-consecutive goals in a span of just 127 seconds, more than doubling their scoring total in the process. All of a sudden, the Eagles were trailing and in danger of entering the break without a lead for the third-straight game. Not only that, but Sam Apuzzo—the nation’s top scorer—had yet to get on the board.

Even though the junior came into the weekend with 11 more points than everyone else in the country, the dry spell wasn’t all that surprising, considering that she had been held scoreless during the first half of BC’s previous two outings.

“[Sam’s] just always really composed,” Eagles head coach Acacia Walker-Weinstein said. “If she has a couple of goals, she stays composed, if she doesn’t, she just stays composed and knows exactly when to step up.”

Right on cue, Apuzzo, who ended the game with nine points, scored or assisted on the final three goals of the half, slingshotting BC right back into the driver’s seat. The teams traded goals throughout the opening 15 minutes of the second half, but the momentum had shifted. It was only a matter of time before Kaileen Hart jump-started a 6-0 run that all but put the 17-11 victory to bed, securing the Eagles’ first win over UNC since 2015.

No. 2 BC (12-0, 3-0 Atlantic Coast) couldn’t have gotten off to a better start. About two and a half minutes in, Tar Heels midfielder Olivia Ferrucci lofted a cross-field pass into the air. Unfortunately for No. 5 UNC (6-3, 1-1), Taylor Walker was all over it. The Eagles midfielder picked off the pass and went coast-to-coast for the game-opening goal. Soon after, Hart delivered a pass to a streaking Emma Schurr, who promptly netted an over-the-shoulder shot.

BC was up two goals on its ACC rival, but, more importantly, netminder Lauren Daly and Co. hadn’t allowed the Tar Heels—the 16th-highest scoring team in the nation—to find the back of the cage once. The shutout didn’t last much longer, though.

In fact, two minutes after Schurr extended the Eagles’ lead, UNC erased it. Following a clear attempt, Maggie Bill slotted her fifth goal of the season. Then, Ally Mastroianni beat Daly for the equalizer, tying the game up at two.

Near the midway point of the half, Cara Urbank restored the Eagles’ advantage. But BC was out of sync, turning the ball over and even committing a shot clock violation on one of its ensuing offensive possessions. Even worse, the Tar Heels won three of the next four draw controls and made a home for themselves inside Eagles territory. Once there, UNC made its presence known, stringing together a 3-0 run, assuming a two-goal lead.

That’s when Apuzzo kicked it into gear. In a matter of minutes, the junior cut inside the 18 and drew a foul on her way to the net. UNC head coach Jenny Levy was livid: The two-time National Coach of the Year pleaded to the referees that they should have called offensive charging. Nonetheless, Apuzzo—who was noticeably amped up—took her anger out on the ensuing free-position shot. The junior accelerated, rifled a shot past Tar Heels goalie Elise Hennessey, threw her stick to the ground, and celebrated with her teammates.

Less than two minutes later, Apuzzo was back it, turning a Dempsey Arsenault pass into her 50th goal of the season. Then, in the waning seconds of the period, the team’s leading scorer scooped up a ground ball, sprinted down the field, and set up Walker for the go-ahead goal.

The scoring spurt certainly carried over to the next frame. Seventeen seconds after UNC’s Marisa DiVietro knotted it all up at six goals apiece, Apuzzo won the draw, sprinted down the field, wrapped around the net, and flicked a pass to Schurr, who went far side to reclaim the lead—one that the Eagles wouldn’t concede for the rest of the game. The run-and-gun scoring play was just the start of a 4-1 BC run that created some distance between the two teams.

Yet the Tar Heels weren’t going to go down that easy—immediately after Urbank was administered a green card, Katie Hoeg capitalized on the one-man advantage, ripping twine. Apuzzo countered with her fourth and final goal of the game, only to see Marie McCool score two in a row, cutting UNC’s deficit to one.

Approaching the 11:50 mark, Walker-Weinstein, albeit a man-up, called a timeout—just what the Eagles needed to get their heads straight. Out of the break, Hart got the best of Hennessey, recording her first goal of the afternoon. Just as BC regained its confidence, UNC shot itself in the foot.

Over the course of the next six or so minutes, the Tar Heels committed four more fouls—two of which warranted yellow cards. The Eagles took full advantage of an overly physical UNC squad that finished the game with 22 fouls—nine more than BC. Led by Hart, five different Eagles, including Arsenault and Tess Chandler, piled on goals, tying off a six-score run to break open the floodgates.

From that point forward, Apuzzo, Hart, and Arsenault milked the clock, holding the ball behind the net and working it around the perimeter to close out the game. Bill scored once more prior to the horn sounding, but it didn’t take anything away from the Eagles’ dominant second half. As soon as the clock struck zero, BC’s bench—donning paisley-branded red shirts in honor of Welles Crowther—sprinted toward to their teammates on the other end of the field. The Eagles rejoiced, as if they had pulled the upset. And in a way, they did.

Despite being undefeated, a national runner-up, and the No. 2 team in the nation, Walker-Weinstein’s crew is still an underdog, at least in its own mind.

“Of course, [the win] means everything,” she said. “It’s a big game. Every ACC game is a huge uphill battle—especially being Boston College where I think we’re still trying to earn respect.”