Samantha Power, current Anna Lindh professor of practice at Harvard Kennedy School and Harvard Law School, chronicled her years in public service and reflected on contemporary politics at a Clough Colloquium address on Thursday, entitled “The State of the World: Challenges and Opportunities.” An audience of nearly 300 people gathered to listen to her speak about U.S. foreign policy and the country’s relationship with the international community.

As a young journalist, Power witnessed horrors in Bosnia and what was Yugoslavia, later publishing a Pulitzer Prize-winning book on genocide. She also worked on Barack Obama’s 2008 presidential campaign, and as the youngest-ever U.S. Ambassador to the United Nations.

She began her talk by outlining the four main premises that influence the state of the world today: the international community and the importance of U.S. leadership, the rise of China, diplomacy as an essential tool to deal with crises, and domestic polarization.

“The international community is in many ways more of an ideal than it is a reality, and in order for it to work and become something of a reality, it requires U.S. leadership,” Power said.

Power cited how the international community came together during the “horrific time of great, great panic” surrounding the Ebola crisis from 2014 to 2016. Countries often run into major inertia when faced with crises and the United States’ efforts influenced how the world responded. Aiding the infected regions of West Africa involved joint efforts on the part of the U.S. and its allies to mobilize health workers and distribute supplies.

While this is one example of the international community coming together, countries are often in competition with one another. Particularly, Power believes the United States must acknowledge the ever-increasing power that China possesses and understand how that will impact U.S. foreign policy.

When it comes to those policies and the discourse surrounding them in this country, China and Russia are often talked about in a similar manner, Power said, except for the fact that China is far more influential economically. China’s GDP is eight times that of Russia and is likely to surpass the America’s in the next 10 to 15 years.

“China is a great force that the U.S. hasn’t confronted or found a way to coexist with in our history,” she said. “We have to find a way to develop a foundation for a partnership with China that is mutually beneficial.”

In developing a partnership with China, she said it can be tempting to reflexively fight its rise and to whitewash its “deeply problematic” domestic, regional, and global policies. She argued that while China wants other countries to accept its domestic governance, the U.S. has a great interest in the spreading and strength of democracy globally.

“Diplomacy is the cornerstone of our ability to pursue American interests in the world,” Power said. “Diplomacy as a tool to deal with crises is essential.”

Today on a national level, however, the U.S. is divided on matters of diplomacy, she said. She presented a series of statistics related to this polarization, and brought to light the disturbing discovery that only 33 percent of Republicans agree with the statement “good diplomacy is the best way to ensure peace.”

“There is no greater threat that I can think of to our national security than our domestic polarization,” Power said.

Power underlined that now is the time for young people with international interests to enter the diplomatic world to be part of U.S. global outreach. To do so, she claimed it is necessary to exercise U.S. leadership within international institutions.

She encouraged young people to prepare for the foreign service exam. Hiring declined by more than one third from 2016 to 2017 in foreign service, and the number of young applicants has declined even more significantly, bringing forth the need to introduce the next generation of diplomats.

“We need to bring in professionals from all walks of life—diplomacy can’t be left to just the foreign service types,” Power said. 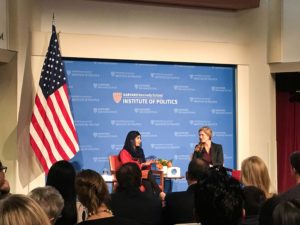