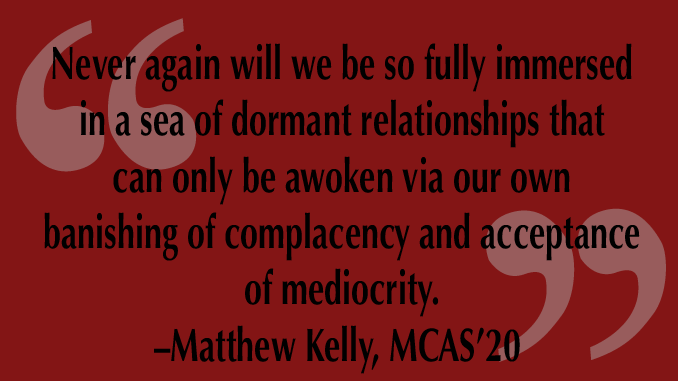 In this new era of hyper-sharing and social media, many of us are painstakingly aware of just how many “friends” the individuals around us hold. Yet delving within the nucleus of so many of these relationships reveals a bitter truth: Most of these absurd associations lack any substance whatsoever. Most of these “friendships” are not only born of convenience and necessity, but continue to live on in that way, never solidifying into relationships of real gravitas. Alas, not every acquaintance of ours is meant to blossom into a lifelong friend, but certainly we should possess a desire to forge relationships that envelop a truer and deeper connection than just that of circustamstance. Within Boston College, there is a grave harm that so many of our relationships with friends, professors, and significant others are constantly on the fringe of futility—so devoid of real connection that they can seem to vanish at any time. Thus, we must endeavor to labor within our relationships, to scrutinize them, in search of compatibility, and find truer weight behind our friendships. Either we can do that, or we can choose to embrace an illusion, an illusion of comfort and security, an illusion where our friends are those who are closest in proximity, not those truly closest to us—yet this illusion may prove to be more capricious than the “relationships” that make it up.

When we are reminded of the volatile nature of these shoddy relationships and the atmosphere of illusion dissipates, it is then that we realize how starved we are for genuine connection. Often the juxtaposition of a myriad of unsubstantial friendships with the discovery of a single palpable one underscores just how great the need for substantial connection is. Otherwise, residing within—or worse, embracing—the illusion, leads to inevitable baneful mecuriality of a life without stability. When true attachment is absent in one’s life, one’s closest cohorts change with the seasons, and someone becomes anyone in the search for temporary comfort. It is in this way, with our own formation paramount, that we must aim to rid ourselves of this delusion and strive towards the particular.

The crux of the problem certainly lies within the meaning in our conversations, or lack thereof. How many conversations between “friends” can be overheard that completely lack any sort of conversational opulence? That is to say, many friendships persist only within the realm of “small-talk” and whimsical quips brought forth only by the happenstance of adjacency. Certainly, at an institution of such repute and stature, we should be able to alleviate all the friendships and conversations “stuck in the doldrums,” between the seas of nonexistence and the actualization of meaningfulness. Yet within an atmosphere of self awareness, which often—but not always—follows intellectuality, individuals are commonly harried away from expression of their true selves, thus permitting the existence of a high quantity of relationships absent of quality. The mitigation of this problem is solely an individual expedition, in which internally we must choose to resist the hallucinatory pleasures of conformity.

At BC, this absence of substance manifests itself in every facet of our lives. It is realized in the brief, dull conversations with our freshman year RA, in an awkward exchange with a former professor in the elevator, within the passing glance and “BC lookaway” of that girl you met last Friday night. And the malignity of time so often washes away the potential we hold to improve our struggling relationships. Yet, here at BC, with such pressures to form ourselves, to become the actualization of our potential, it is paramount that we seek out needles from these haystacks of passersby. Never again will we be so fully immersed in a sea of dormant relationships that can only be awoken via our own banishing of complacency and acceptance of mediocrity.

To harp on an earlier example, that of professors, this type of mentor-mentee relationship is often undervalued and under-pursued. Always older than us, and often wiser too, the friendships we could obtain with professors are perhaps the most beneficial, yet often the rarest. Commonly in the times of their lives where loose-ends have been tied and hollow relationships filled or scorned, professors have already trodden many of the paths that we walk along while here at BC. We would be fools to never attempt to garner wisdom from them, and at that even a friendship itself. In this vein, both counterparts should be willing and open to the possibility of friendship despite the stark contrast in their positions, as there is a certain wisdom that each can impart on the other. That being said, the reality of this friendship can be deeper and more concrete than that between peers.

Having now received an invitation to dissect and rebuild the relationships surrounding us, all must work towards breaking the illusions in which they reside, recognizing and breaching the mirage perpetuated by the Instagram likes and Twitter followers. Continually, we must bring to fruition the possibility out of the latent reality of our relationships. It is in doing so that we begin to cultivate our best selves and the best selves of those around us. When we fully decide to gravitate towards that which is true and concrete, we steady many of our own inner turmoils and find ourselves enhancing our most admirable attributes. And when we are exemplifying our best selves, and those around us are doing likewise, we can extract more happiness from life than ever before. After all, who would be against that?