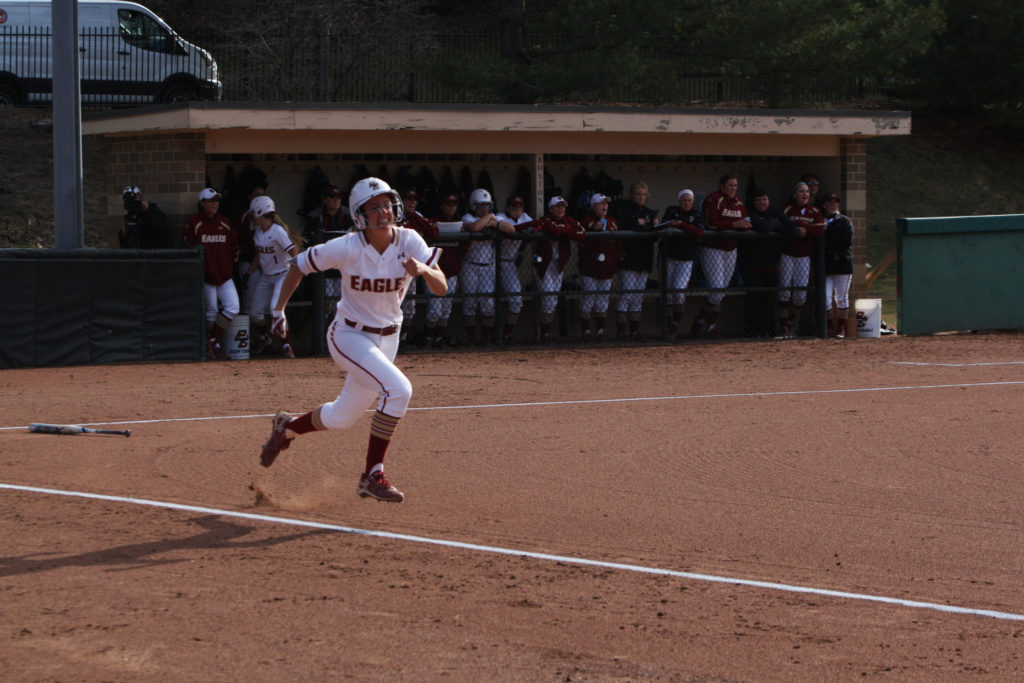 Jordan Chimento’s seventh-inning bomb on Wednesday afternoon sent Boston College softball back to Chestnut Hill not only with bragging rights, but also a four-game win streak. Now, the Eagles (13-15, 3-3 Atlantic Coast) head to Syracuse with a full head of steam. Both Jessica Dreswick and Allyson Frei are pitching better than they ever have before, currently posting career-low ERAs. And they’re getting more help than they’re accustomed to, at least as far as this season is concerned. During the four-game stretch, the Eagles have racked up an average of six runs per game—2.39 more than they’ve been recording on a game-to-game basis this year.

The Orange (16-12, 4-5), on the other hand, is trending in the opposite direction. Once 15-8, Syracuse has dropped four of its past five, plummeting to the lower half of the ACC’s Atlantic Division standings. At a critical juncture in the season, it’s just as important for Syracuse to right the ship as it is for BC to keep the ball rolling.

The series will be broadcasted on ACC Network Extra and livestreamed on WatchESPN.

1) Dreswick and Frei have only allowed a combined seven runs over the course of the past five games.

2) While the Eagles may have the third-lowest ERA (2.20) in the conference, their .239 batting average ranks just 14th in the ACC.

3) After recording just four hits in her first 16 games, Chimento has logged at least one in nine of her last 10 games, including six in a row.

1) Bryce Holmgren leads the ACC with a .434 batting average and a .547 on-base percentage—a mark that’s 63 points higher than anyone else’s in the country.

2) The Orange rarely hits for power. In fact, Syracuse has only tallied two home runs this season, seven less than every other team in the ACC. That said, head coach Mike Bosch’s team isn’t nearly as troubled when it comes to reaching base: After all, the Orange has five players batting over .275.

3) Syracuse is the fourth-best fielding team in the ACC, having only committed 27 errors all year.

Almost a year ago to the day, BC traveled to Brown to play the Orange in a neutral-site series. Due to weather, the first of the three-game series was canceled, but the teams made up for the missed time with back-to-back extra-inning affairs the next day. As dramatic as they were, the two games were virtually identical: Syracuse jumped out to an early lead, only to see the Eagles tie the game up in the seventh frame and force extra innings—the rest was history. Two different BC players played hero, recording consecutive walk-off hits. First, Allyson Moore ripped a double into center field to score Game One’s go-ahead run. Then, a few hours later, Dani Thomas stole home on a wild pitch to cap the series sweep.

Just like last year, the Eagles are gearing up to face off against their ACC rivals as winners of four of their last five. Following a rocky start to the season—the program’s worst since 2013—BC is quickly making up ground in ACC play. With Dreswick and Frei at the helm, the Eagles have the pitching to shut down Syracuse for the second-straight year. Once again, it’ll come down to the Eagles’ lineup, likely late in the game. But if the Orange get a hold of either of BC’s aces, the Eagles could be staring at a sub-.500 ACC record at the end of the weekend. Head coach Ashley Obrest’s team is just 1-7 when conceding five or more runs this season.