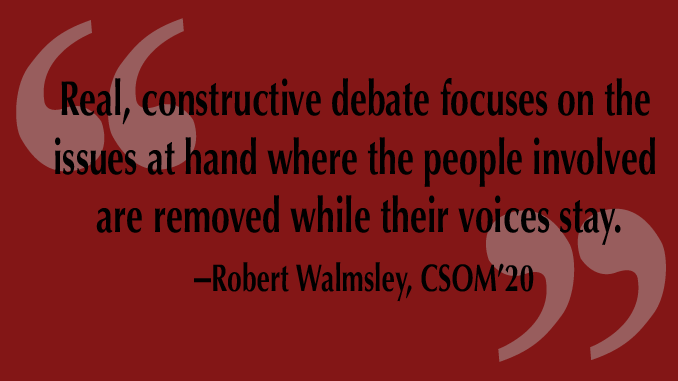 The search through the wide array of scattershot films on Netflix can seem to many a futile endeavor. It’s no secret the majority of subscribers purchase the streaming service because of the original television content along with other staples like The Office and Breaking Bad. I do, however, as a professed lover of movies and a broke college student, attempt to find a hidden treasure buried beneath the seemingly farcical layers of categories. One I stumbled upon this Easter Break, due to a previous recommendation from a friend, was the documentary Best of Enemies (2015).

The film takes an in-depth look at the series of 10 debates between William F. Buckley Jr., a conservative, and Gore Vidal, a liberal, during the 1968 Republican National Convention to help save the fledgling ABC News. The political unrest of the time is shown alongside the two fierce intellectuals fight through the burgeoning phenomenon of identity politics. The message is a poignant warning for the present, even more so than when the film debuted, but I took something else from it: the correct way to work through political issues with a peer.

James Altucher, a former hedge fund manager and author, recommends to take in as much information as possible, because in each book, article, or movie you see, you’ll only end up remembering one to two ideas after you flip the last page or the credits roll. It’s interesting, however, to see what sticks. It may depend on one’s mindset at the time or on a variety of other reasons, but as with all art, there’s no telling what will resonate. This movie was obviously about argument and politics, so I thought back to a few (uneducated) debates with my friends in the common room or my dad in the car, and a moment in the film stuck with me.

The most prominent realization gleaned from the dense documentary on these two equals was how personal the proposed debates seemed to become. Buckley and Vidal were masters of articulating and deconstructing arguments, yet they delved into ad hominem attacks. As the ABC publicist for the production George Merlis put it, “Their real argument, in front of the public, was who was the better person.” When you get beneath the theatrics of the debate, the various solutions to the war in Vietnam and race riots, this was the central point in the argument at hand. They were each placed in a chair to represent parties of millions, but it came down to themselves.

When even political experts on a stage of millions can be reduced to this, what happens in casual conversation or over the dozens of social media outlets? Many, if not the majority, of opinions aren’t heard or cared for, but a recent politically charged post by a now-resigned Undergraduate Government of Boston College senator on Facebook certainly was. It related to Black Lives Matter and sparked conversations on the appropriate handling of the proposed impeachment, as well as other issues relating back to the march on campus in October. After watching this documentary, I recollected a conversation I had about this post through a new lens and realized I fell into the same trap.

It took place with my right-leaning coworker, and it was quite cordial. She stated her opinion on the matter, and I mine—it was a harmless conversation, albeit one on tough issues. But, I now realized, it was not productive. She thought the statement was slightly offensive, but wasn’t pleased with the handling of it by UGBC. I made bland points about why I thought the post was wrong and questioned why someone would say it. I wasn’t furthering the conversation. I was implicitly confirming to myself that I would never utter a statement of that nature. I voiced enough concern to take comfort in my ideals, but avoided bringing up uncomfortable ideas that could lead to consolation and agreement, which is the constructive end to any conversation.

Everyone has their own point of view, of course, but that’s not the problem. Members of both parties seem to either take comfort, as I did, or attack the person in front of them, as Buckley and Vidal did, to lift themselves on top of the relative moral high ground they constructed themselves. Real, constructive debate focuses on the issues at hand where the people involved are removed while their voices stay. The current trend of the personalization and self-gratification in political discourse in America and on college campuses serves as a harbinger of an unhappy and politically unproductive future.

Each individual’s impact may not come close to that of these two great debaters, but we can all learn from their mistakes. The cumulative conversation of the parts of a whole issue matters in shaping change, after all, especially at a university like BC. Not every conversation one has should be aimed at fundamentally changing the world, but they should focus on deliberating the issues at hand. These small steps will lead to the formation of a more unified student body composed of ideologically diverse students.