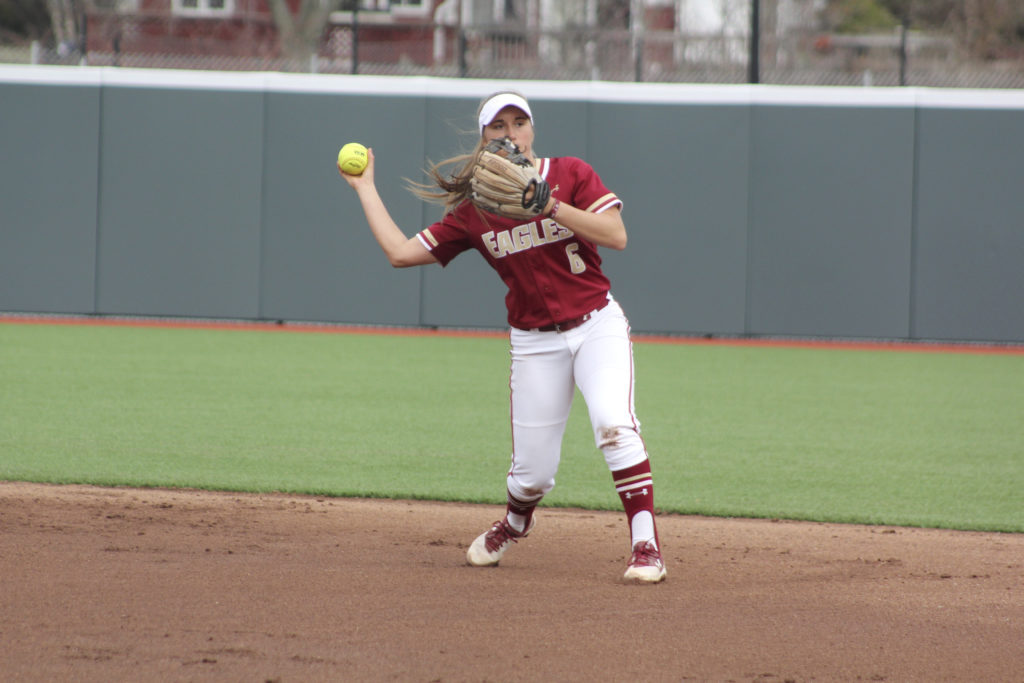 After wrapping up a successful weekend with a pair of victories over ACC rival Notre Dame, Boston College softball (25-18, 11-6 Atlantic Coast) looks to extend its win streak to three against a local opponent in Harvard (20-13, 13-5 Ivy League). This past weekend marked the first time BC has beaten the Irish twice in a row since 1998, which coincides with the last time the Eagles managed to pick up a series win against their fellow Catholic school. The Eagles will look to continue their offensive momentum, after having scored 15 runs in the past two games.

1) Annie Murphy continues to have a torrid season at the plate. On Sunday, she extended her hitting streak to 15 games with two hits. For the season, she is batting .383 and also leads the team with 26 RBIs.

2) Lexi DiEmmanuele stole her team-leading 18th base of the season this past weekend, and moved closer to a place in the BC record books. She now has 72 career stolen bases, the second-most in program history.

3) Jessica Dreswick and Allyson Frei continue to have career seasons. Both boast career-low ERAs this year, and their combined ERA sits at an impressive 2.27.

1) The Crimson have been extremely comfortable at home in 2018. They are batting .361 at Soldier’s Field, compared to just .251 on the road. They also average 6.88 runs per game when they play in Cambridge, and just 4.23 per game elsewhere.

2) Harvard is led by the experienced duo of Rhianna Rich and Maddy Caplan. They are batting .427 and .423, respectively, and have started a combined 63 games this season.

3) Four separate pitchers have appeared in a game for Harvard thus far this season. They have combined for a 3.44 ERA and average 3.88 strikeouts per seven innings.

BC and Harvard haven’t met since 2016, when the Eagles traveled to Harvard’s Soldier’s Field. Despite a complete game effort from Frei, BC’s bats couldn’t muster enough to secure the win, as the Eagles found themselves on the wrong end of a 2-1 scoreline.

Much like UMass, last week’s non-conference opponent, this is not a team the Eagles can afford to take lightly. They—like the Minutewomen—are at the top of their conference, and boast an 8-1 record at home.