Unless you’ve been living underneath some mammoth sized rock these past few months, you’ve probably heard of Marvel’s newest Avengers film, the most recent entry into the hugely popular and successful line of MCU movies, which have (as of this writing) grossed nearly $15 BILLION at the global box office. That’s a serious chunk of cheddar, and if the analysts are correct, that number will continue to rise precipitously after Avengers: Infinity War has had its run.

The hype that’s been built up for this movie has been almost unbelievable. Touted as the culmination of 10 years of character development and filmmaking, the film has enjoyed an extended spot in the limelight that few others can even hope to hold a candle to. Seriously, the internet can’t shut up about this movie, sending it’s teaser trailers rocketing up to the number one spot on YouTube trending within hours of each release and spawning endless Reddit threads spouting out absurd theories that fans have latched on to with an alarmingly voracious appetite just because they mention the word “Hawkeye.” So, after watching the movie, does it live up to these universe-sized expectations? Well, yeah.

Infinity War tells the continuing story of the usual Avengers gang (Iron Man, Hulk, Captain America, and the like), as well as some newer additions, and their battle against Thanos, the big baddie who’s on his way to gather up as many shiny and colorful gems (infinity stones) for his gauntlet. Each stone bestows onto him a different power, and if he manages to get his hands on all six then he’ll have access to some super crazy stuff that’ll allow him to destroy whatever parts of the universe he likes.

Naturally, the Avengers don’t particularly want that to happen, so they set off on quests to stop him from getting the stones. And yes, that’s quests, plural. The presence of multiple plotlines in this story is absolutely necessary given just how large the cast is and how much of that cast is made up of superheroes, many of whom have gotten their own individual movies.

In fact, this is the main criticism that has been brought up against Infinity War: It’s just too much. Even with an epic runtime of two hours and forty minutes (phew), one can’t help but get the feeling that Marvel is simply cramming as many characters as possible into this film in an incredibly sophisticated attempt at mainstream fan-service.

Of course, there’s nothing wrong with having multiple threads and points of view running through a movie, but when those pieces are all as distinct and frenetic as they are in Infinity War, the movie as a whole can lend itself to a movie experience that feels jerky at times. One moment the audience will be riding along with some of the original Avengers, but just as it feels like that section of the plot is picking up steam, it’s thrown back to another section that hasn’t been touched in what feels like over an hour.

The pieces, rather than being carefully integrated within the lore of the universe and the actions of the other characters, are instead poured on rapidly. The result is that for a few fleeting moments, viewers might feel as though they are drowning in too much exposition. There are likely going to be multiple points where one has to do some serious thinking just to remember the goals of each cast of heroes, the obstacles they have come across or are coming to, and the like. In addition, without spoiling too much, the way the characters come together throughout and specifically at the end of the movie is a bit strange and not totally satisfying.

Of course, the strange pacing and direction (at times) of the film may just stand out more, as is often the case, because the movie overall is so excellent. This might be the standard now for Marvel films, but it really does check all the boxes that many other movies struggle to hit. The acting is universally on point, the sound design and score are fantastic, and the special effects are an absolute marvel (hah) to witness.

Really, everything that any fan could want is here in the movie and is present in absolute abundance. Special shoutout goes to the numerous sparkles of Marvel humor throughout the film. While not each one is a certified knee-slapper, they definitely did lift up the movie as a whole, and it is impressive that in a film such as this, where the stakes are as high as possible (literally, the universe and existence as we know it is on the line), the directors could still include a large amount of personalized endearing quips and exchanges between the characters.

Infinity War is a movie, more than anything else, for the fans. The directors certainly kept a strong finger on the pulse of their supporters, to the point that the viewer can feel it while watching the film. This is by no means a bad thing, and if one comes into this movie simply hoping to see all their favorite MCU characters duke it out on as grand and massive a scale as possible, then they’ll certainly get what they’re looking for.

They also might get something else, however: a sense of fatigue. Undoubtedly, Infinity War is an exhaustive movie, but ultimately rewarding all the same. It’s an incredible cultural event that anyone with a passing interest should take a part in. Rarely does a mainstream film of such popularity coalesce with as devoted a group of fans as those that Marvel has. Now that the universe has reached this point, it makes for an incredibly lively and enjoyable movie theater experience. Grab some friends, head to your nearest cinema, make some new ones, and enjoy the unbelievable rollercoaster ride that is Avengers: Infinity War. 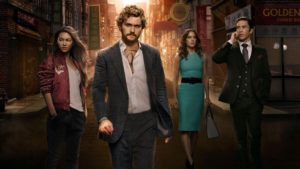