STONY BROOK, N.Y. — This past weekend, fourth-seeded Boston College lacrosse held Stony Brook scoreless for the final 20 minutes and 17 seconds of play, allowing itself just enough time to erase a three-goal deficit, force an extra frame, and record the game-winner in overtime. But in Friday’s rematch of the 2017 National Championship, the Eagles couldn’t buy a stop—at least for the first portion of the opening frame.

BC—the seventh best defensive team in the nation—conceded five goals in the first eight minutes of regulation. Top-seeded Maryland tacked on another prior to the midway point of the period, taking a 6-2 lead into the second media timeout of the game. The Terrapins were simply running their course. After all, the 13-time champions entered the night having tallied 197 first-half goals on the season.

Yet, instead of pressing the panic button, Eagles head coach Acacia Walker-Weinstein used the break in play to go back to the drawing board.

“I was really just adjusting some X’s and O’s,” Walker-Weinstein said after the game. “I really don’t have to address the mentality of these girls. They’re so level.”

In a matter of minutes, Sam Apuzzo—who had only scored a combined two goals in her first two games of the NCAA Tournament—infiltrated the 18, spun, and employed a hesitation move to set up her first goal of the night. As soon as the ball hit twine, Apuzzo threw her stick to the ground emphatically. The tide was about to turn.

Apuzzo’s goal marked the first of six Eagles’ scoring plays to end the half. BC picked up right where it left off in the second period and outscored the Terrapins, 7-5, becoming just the third team in the past six years to upset Maryland. Above all else, though, the 15-13 victory punched the Eagles’ ticket to their second-consecutive National Championship.

As far as draw controls are concerned, BC (22-1, 7-0 Atlantic Coast) is one of the best there is in the sport. In fact, coming into the weekend, the Eagles were winning an average of 16.18 draws per game, the seventh-most in the nation. The problem is, Maryland (20-2, 7-0 Big Ten)—a team that ranks second in that department—is simply a different breed.

The Terrapins won the first three draws of the game and made the most of the possession time, scoring three goals in the opening two minutes and eight seconds. Right from the start, Jen Giles and Kali Hartshorn—Maryland’s third- and fourth-leading scorers—established a connection. When all was said and done the two playmakers finished with a total of 11 points.

Before things could really get out of hand, Dempsey Arsenault wrapped around the cage and flung a shot past goalie Megan Taylor. Unfortunately for BC, the sequence hardly slowed down the Terrapins. Over the course of the next five minutes, Hartshorn tacked on her second goal of the night and Taylor Hensh got on the board, teaming up to extend the defending champions’ lead to four.

Tess Chandler tried to stop the bleeding around the 20-minute mark. The redshirt senior beat her defender and muscled a near-post shot by Taylor, but Maryland made up the lost ground in due time—four minutes and 26 seconds to be exact. Hensh sprinted past Hannah Hyatt and fired a shot into the bottom of the cage while falling to the ground to restore the Terrapins’ four-score advantage.

Quite frankly, the game looked as if it was a blowout in the making. Maryland was dominating possession, drawing fouls and free-position attempts at will. Most importantly, head coach Cathy Reese’s team was creating an array of scoring opportunities, despite the fact that its leading scorer, Megan Whittle, was being heavily faceguarded.

The Eagles had to kick their offense into gear, or else Maryland would run away with the semifinal matchup. Walker-Weinstein turned to Apuzzo—the third-leading scorer in the nation and one of this year’s five Tewaaraton Award finalists.

“She was not playing well in the first half, and I just said to her, I was like, ‘Listen Sam, you were born for this,” Walker-Weinstein said. “This is what you were made for: this moment.”

Soon enough, the junior was making quick work of the Terrapins defense, jumpstarting a 5-0 BC run in the back half of the first period. Every goal that the Eagles scored, Kenneth P. LaValle Stadium got that much louder. In the span of four minutes and 21 seconds, Apuzzo and Co. evened the score at six goals apiece.

The star attacker isn’t the only one that deserves credit, though. Cara Urbank—who finished with a hat trick—logged two-straight first-half goals, at one point wowing the crowd with a highlight-reel ankle breaker, and actually gave BC its first lead of the contest.

That’s just about when the game—one that had been defined by runs—transformed into a hair-raising, back-and-forth classic. After trading goals to close out the half tied at eight, the teams continued to exchange scoring plays in the second period. There were three lead changes and five ties in the final 30 minutes of action. The duo of Giles and Hartshorn was practically unstoppable, Arsenault logged a hat trick, and players like Chandler and Hensh came up with a couple of big-time goals.

Fittingly, Apuzzo—who ended up recording a team-best 10 draw controls and four goals—tipped the scale. With under eight and a half minutes to go, the junior danced behind the back of the cage. After veering left, she spun, backtracked to the right, and immediately pivoted, breaking Grace Griffin’s ankles. Apuzzo capped off the SportsCenter Top-10 play with a near-post goal as she fell backwards, a few feet behind the crease, breaking the 13-13 tie.

Swinging the momentum, the junior won the ensuing draw and, just 40-some seconds later, scored her fourth and final goal of night. From there, the Eagles’ defense took over. The unit that shut down Stony Brook showed up when it mattered most, shutting down the Maryland attack and preserving BC’s two-goal lead in the final stages of the game.

The minutes flew by, and the Eagles ran out the remaining time on the clock, sealing their first win over the Terrapins in program history. A semifinal victory is impressive on any level, but it means all the more when it comes against Maryland—the team that ended BC’s title dreams in 2017 and has only lost six games since the start of the 2013 season. That said, it’s clear that this year’s trip back to the National Championship is about more than just revenge.

“While, yes, it is motivating to come into this game having lost to them last year, I think it’s really important to remember that we are a new team, and this is a different year,” Eagles goalie Lauren Daly said.

This year—one in which BC has already won the most games in single-season program history, claimed its first regular season ACC title, and defeated the only two teams to occupy the No. 1 spot in the 2018 Inside Lacrosse Poll—is about making history. 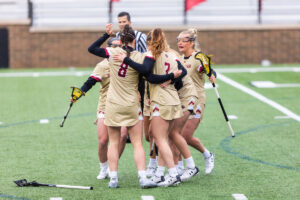