The Killers, Portugal. The Man Shine at Boston Calling Day 1

Thousands of fans passed under Boston Calling’s colorful arches to enter a music fan’s oasis in the heart of Cambridge during the first day of this year’s three-day festival. Headlined by The Killers, fans were treated to many varieties of rock throughout the day.

Citizen, an emo band from Ohio, was among the first acts to perform on Friday, and the band brought a brooding sincerity to the Delta Blue Stage. Lead singer Mat Kerekes screamed the lyrics into the microphone with a guttural bravado that electrified the crowd. The cool afternoon breeze carried the menacing guitar riffs to the crowd, complementing the singer’s chilling lyrics. Members of the crowd confidently echoed the lyrics of “The Night I Drove Alone,” a highlight of the band’s set.

Perfume Genius captivated the crowd gathered around the Red Stage later in the day. Matt Hadreas, the man behind the stage name Perfume Genius, maintained an intense stage presence throughout the set. Hadreas’s all-white attire blew in the wind to recall images of a modern prophet while he contorted his body around the stage, bending with the movement of the music. Bright stage lights and smoke helped create a dramatic atmosphere for songs with massive builds like “Slip Away.”

A brief video of Beavis and Butt-Head explaining why Portugal. The Man is the best band and comparing the band to The Beatles, The Rolling Stones, and the like set the lighthearted mood for the Alaska-based band’s set. The band pulled from its eclectic range of inspirations, including metal and classic rock—the group opened with an impeccable cover of Metallica’s “For Whom the Bell Tolls” that bled into a cover of Pink Floyd’s “Another Brick in the Wall, Pt. 2.” The crowd sang the latter song’s iconic lyrics, perfectly enunciating the line “Teacher, leave those kids alone.”

Those who showed up to Portugal. The Man’s set expecting an airy sound uniform to that of the band’s mega-hit “Feel It Still” may have been shocked by the much more vicious sound of the band’s other works. While heavy guitar riffs and drum beats took over the stage, funny phrases like “rock critics can suck my whole asshole” and “don’t worry, we are playing that song right after this” were displayed on the screen behind the stage to keep the evening light. Portugal. The Man certainly showcased its illustrious talent throughout the set, often jamming on stage beyond the recorded version of songs—the hardcore guitar-driven instrumental from The Beatles “I Want You (She’s So Heavy)” followed the band’s performance of its 2011 song “All Your Light (Times Like These).”

Fans dispersed to the Red and Blue Stages to watch The National and Paramore respectively following Portugal. The Man’s set. Paramore’s Hayley Williams stunned the crowd with her unmatched vocal skill during the band’s set that included well-known hits like “Still Into You” and “That’s What You Get.” Far from the rowdy riffs of Paramore, The National brought an airy tone to the festival as the sun set. Matt Berninger’s deep vocals reverberated through the dusk sky as a growing crowd watched from the adjacent Green Stage while waiting for the headliners. The crowd sang along to the slow lyrics of the calming track “I Need My Girl” as lights danced on the screen behind the band.

The Killers made a bold move by opening their nearly two-hour set with “Mr. Brightside,” a song that has become a party playlist staple in recent years. The band filled the following hour-plus with plenty of recognizable hits like “Somebody Told Me,” “Run For Cover,” and “Read My Mind.” Halfway through the set, frontman Brandon Flowers became entranced by signs held by audience members at the front of the massive crowd and invited one of the sign-holding crowd members onstage to replace drummer Ronnie Vannucci Jr. during their performance of “For Reasons Unknown.” The crowd cheered on the fan drummer, called “Nick from Boston,” as he kept up with the veteran musicians, and the audience even chanted “Nick” when the teenager delivered an impeccable instrumental during the song.

The Killers included a performance of Tom Petty’s “American Girl” to pay tribute to the late rocker during their set. A confetti explosion concluded a dramatic performance of “All These Things That I Have Done,” during which the audience passionately chanted along to the repeated lyric “I got soul but I’m not a soldier.” For the encore, Flowers returned in a glittering gold suit and gave an Elvis-like performance of “The Calling,” pausing in the middle of the stage to mimic the American rock star’s gunslinging stance in the iconic Andy Warhol piece “Double Elvis.” The band closed the night out with “When You Were Young,” employing pyro during the last chorus and leaving the audience with a burning desire to return for more invigorating musical performances during the following days. 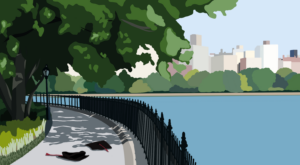 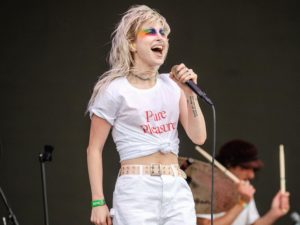