Off to its best start since the 2009 season, Boston College women’s soccer (6-0) is looking to continue its unbeaten streak, heading down Commonwealth Avenue to take on rival Boston University (1-5).

Who is BC playing?
Boston University

Where is BC playing?
Nickerson Field, Boston, Mass.

How to Watch:
The game will be available to stream on the Patriot League Network.

1) The biggest offensive weapon for the Eagles thus far has been a surprising one—centre back Gianna Mitchell currently leads the team with five goals. Each scoring play has come off of corner kicks, including her last one—a ninth-minute header against Texas Tech that proved to be the game winner.

2) Sam Coffey, unsurprisingly, has been the motor for the Eagles. A year removed from a breakout freshman season, the member of the U.S. National Team program is leading the Atlantic Coast with 14 points, six coming via the assist. She totaled 10 assists in 20 games last season, but is on pace to soar past that mark.

3) Mitchell and the back line have been nothing short of phenomenal, posting five-consecutive clean sheets. It’s equal parts Mitchell and Kayla Duran clogging up the middle, Alexis Bryant directing traffic from the net, and Rachel Newborough, Elysa Virella, and Erin Convery manning the outside. It’s been over 500 minutes since an opponent last managed to beat the group, a fact nothing short of remarkable.

1) The Terriers managed to blank Connecticut last time out, their first win on the year, but the previous five games didn’t go to plan—they allowed two-plus goals in all but one. Granted, they’ve played most of their games on the road, but they still rank last in the Patriot League in goals allowed per game.

2) Anna Heilferty, a sophomore forward, has picked up where she left off in 2017. The reigning Patriot League Rookie of the Year, Heilferty has four points in her last two games and has already found the back of the net twice on the year. Wearing No. 27, she’s frequently peppering opponent goalies with shots, having taken more than two in each of the games this year.

3) One promising stat for the Terriers this year is how they’ve played at home. They narrowly lost, 1-0, to No. 14 Princeton, then rolled past the Huskies, 3-0. The loss to the visiting Tigers was largely due to a 52nd-minute goal, and BU wasn’t without chances to equalize or pull off the upset, a promising sign after a disastrous start to the year.

It wasn’t much of a contest last year, as the Eagles took a lead in the 19th minute and never looked back, en route to a 3-0 blanking. BU conceded the opening goal on a corner kick—to none other than Mitchell—then struggled to play from behind. After BC was kept off the scoreboard the rest of the half, the Eagles needed just four minutes after the restart to tack on insurance, with since-graduated Lauren Berman converting a penalty kick, the foul befitting of a matchup between local rivals. The final goal, in the 69th minute, was a cross from Berman to Carly Leipzig, the icing on the cake of yet another rivalry win. BC has won seven of the last nine meetings, going 7-1-1 in that span.

It plays to its ability. There’s no doubt that the Eagles are the better team on paper, especially after a resume-bolstering win over then-No. 21 Texas Tech last week. The defense is clicking on all cylinders and is well-equipped to handle Heilferty, the only BU player with more than three points. Throw in the fact that Mitchell scored against them last year and Coffey is playing quite well, and most signs point in the visitors favor.

The Terriers’ back four—featuring three experienced seniors—is able to stifle Coffey and Co., and somehow find a window of opportunity against their toughest opposing defense yet. BU has managed just six goals in six games, but five of those came in its last two matchups. If that’s a sign that the offense is coming together, then there’s a chance that they can be the team that breaks an impressive scoreless stretch for Bryant and the Eagles. It’ll hinge on protecting their net better than in years past, though—BC has won by the 3-0 scoreline the last two seasons. 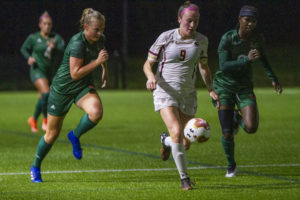