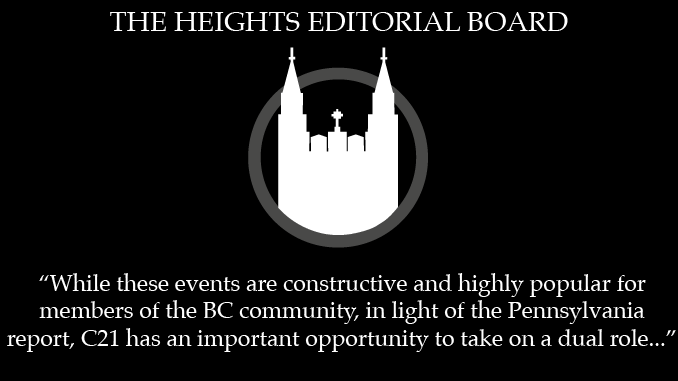 In the wake of the explosive revelations in a Pennsylvania grand jury’s report on clergy sex abuse and cover-up released last month, University President Rev. William P. Leahy, S.J., told faculty and staff at University Convocation Wednesday that BC should have a “similar response” to the report as it did more than 15 years ago to the Boston sex abuse crisis, when the University launched the Church in the 21st Century Center (C21).

Originally launched in 2002 as a two-year initiative, the C21 Center offers symposia, lectures, conferences, and other think-tank-type resources to address the scandals in the Church and assist the movement from crisis to removal. In 2004, C21 was established by the University “as a permanent commitment to explore the neuralgic issues facing the Catholic Church today.”

With many other Catholic or Jesuit universities releasing statements on the report, perhaps BC’s first move should be an initial rebuke, going beyond Leahy’s remarks last week. The presidents of Notre Dame, Fordham, Loyola Marymount, Holy Cross, and St. Joe’s all shared varying degrees of reflection on the report. BC’s lack of communication on the issue is noteworthy at least.

As one of the most prominent religious institutions in the country—and in light of its stated goal of being the preeminent Catholic university in the U.S.—BC is uniquely qualified to lead the Church’s response to these latest allegations, and we’re curious to see what response is made.

One thing to consider is how to engage students, both Catholic and non-Catholic, on issues of abuse and what it means today to attend a Catholic institution. As an pre-existing institution on campus, C21 should be the focal point of such efforts. In recent years C21 has shifted away from its original think-tank-style mission relating to issues of abuse and the institutional challenges facing the Church to one more centered around modern Catholicism, holding events for students such as Agape Latte.

While these events are constructive and highly popular for members of the BC community, in light of the Pennsylvania report, C21 has an important opportunity to take on a dual role: continue to engage students generally on issues related to modern Catholicism, and more specifically return to its work as a catalyst for long-term discussion of reform in the Church.