For some transfers, it can take a while to get adjusted to a new group of teammates, and coaches often warn not to look too closely at early season struggles—it’s a unfamiliar environment and way of playing, and making an immediate jump is tricky. Try telling that to Boston College women’s hockey forward Lindsay Agnew, though.

Agnew, a junior who spent her first two collegiate seasons at the University of Minnesota, scored an overtime game-winner on Thursday night to lift the sixth-ranked Eagles to a 2-1 win over visiting No. 10 St. Lawrence. It was her second goal in as many games, and the transfer entered play on Friday afternoon tied with Makenna Newkirk for the team lead in points, having already chipped in a pair of assists as well.

The game-winning goal, her second home game in a row scoring one, came just a minute and a half into overtime, when Grace Bizal started a breakout from the defensive zone. Bizal sent the puck ahead to Newkirk on the right wing, who found Agnew near the middle of the ice. The Minnesota product skated over the blue line, and with a defenseman screening Saints (2-2-1) goaltender Grace Harrison, launched a wrist shot that beat her to the near side post.

Agnew, clearly fired up, drew back a mock arrow in celebration, then punched the sky—a fitting celebration before she was mobbed along the boards by her teammates, with Newkirk leaping into the scrum after registering the game-winning assist.

“It’s been awesome, and I’m honestly just so happy to be here,” Agnew said. “To score two goals at home is just a great feeling. I think I had over five shots on net, so I was trying to change the angle of my shot. I used that D as a screen, and it went in.”

The overtime win that handed BC (2-2) its first ranked win of the season while also evening its record featured plenty of fast-paced action. The Eagles peppered Harrison throughout, but she largely stood fast, turning away 32 of 34 shots in a performance that nearly single-handedly kept her team in the game.

“Their goalie played outstanding, and they go hard,” Eagles head coach Katie Crowley said. “I thought that we had some offensive chances, especially in the first, that would of helped us. We’re still working through that.”

The first period was an up-tempo 20 minutes, with neither team managing to break through while additionally hearing few whistles. BC had a 13-4 edge in shots, but the biggest chance of the period belonged to the visitors—a power play near the end forced Eagles goalie Maddy McArthur into action. The penalty on Erin Connolly for hooking led to two saves for the freshman, denying Rachel Smith each time.

BC continued to dominante overall chances into the second period, but it was St. Lawrence who surprisingly struck first. Five minutes into the frame, Saints forward Steph Keryluk was back-checked in the neutral zone, and the puck bounced away. It slid right into the possession of her teammate Charlea Pedersen, though, and the sophomore beat McArthur low for the game’s first goal.

The Eagles had an answer, though, and it was Caitrin Lonergan who scored an early candidate for the goal of the year. Cayla Barnes sent the puck up to Lonergan at the blue line, and the forward skated in on a defenseman. She perfectly curled the puck back and toe-dragged the defender into a screen of Harrison, then fired a nearly impossible shot to save, tucking it past Harrison for the equalizer.

Both teams had chances down the stretch, with the third period nearly even in shots. Still, it was fitting that the top-10 matchup went into overtime, even though it didn’t take long for Agnew to end it. Minnesota was never the right fit for her and was stuck on the bottom lines, but it’s clear that Crowley found yet another goal-scorer to threaten opposing teams with.

“Coming in is a difficult thing,” Crowley said. “She’s just always trying to get better. She takes what the coaches say and learns from it. I just think we’re really lucky to have her here—she’s a great player and a great person.”

BC still has kinks to iron out—it threatened constantly but struggled to finish off chances—but getting the first quality win of the season surely relieves some part of the burdensome expectations it faces this season. The Eagles have a clean slate at 2-2 on the year and will look to continue to shore up the little things before a conference regular season title defense begins. 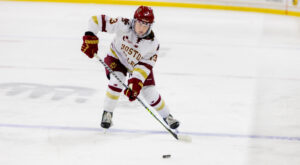