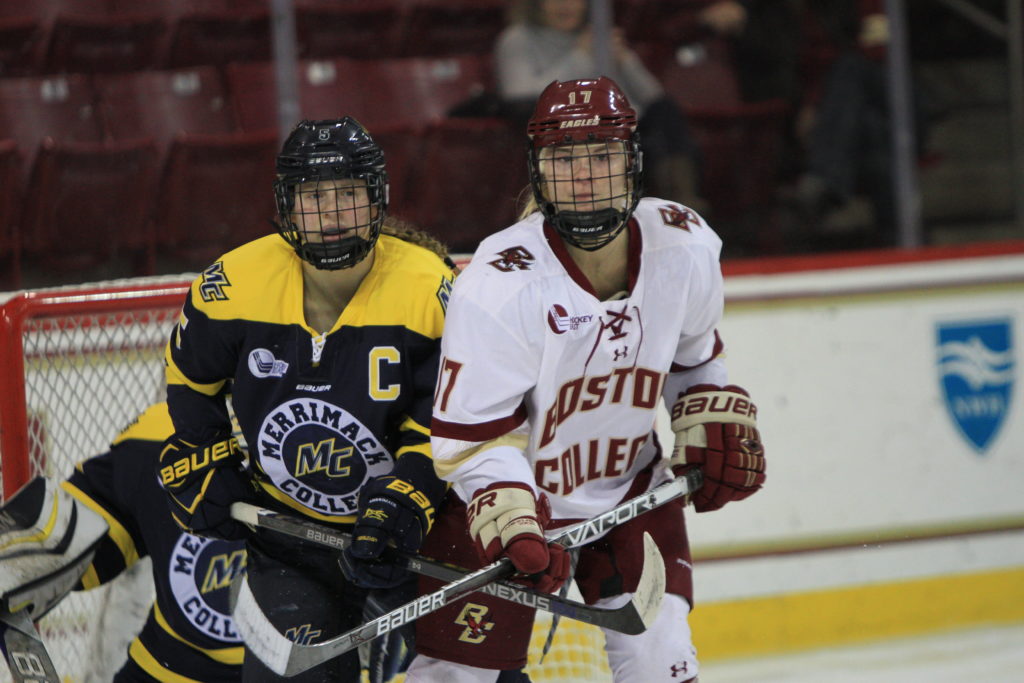 After opening the season with a pair of losses to a top-10 team, Boston College women’s hockey has gotten back on track in its last three games at home. The sixth-ranked Eagles (3-2) routed Syracuse and swiped victories in back-to-back overtime contests against then-No. 10 St. Lawrence. BC will open its Hockey East schedule at Kelley Rink when it hits the ice on Friday night against Merrimack (3-0-2). It will be the Eagles’ third consecutive weekend in Chestnut Hill, and they will look to continuing riding the momentum that they have built in the last three games.

The game will be available to stream on WatchESPN.

1) The Eagles are off to an undefeated three-game home start for the sixth-consecutive year. BC has loved playing at Kelley Rink over the years, losing just four games there in the past three seasons.

2) Minnesota transfer Lindsey Agnew has made an immediate impact on the Eagles’ offense, netting two goals in the first five games of the 2018-19 campaign. One of these was the decisive game-winner in overtime against St. Lawrence last Friday.

3) BC has only cashed in on two of its 14 power play opportunities so far this season. With the offense already showing how dynamic it can be, the man-up unit figuring it out would only serve to add to this success.

1) This is just the fourth season for the Merrimack women’s hockey program, and it has been a slow start for the Warriors. They’ve posted a losing record in each of their first three seasons, but look to be on the upswing this season, notching an undefeated five-game start.

2) The Warriors have allowed just five goals in as many games this season. Samantha Ridgewell minds the net for Merrimack, and she opened her senior season with a shutout against Union.

3) Kaitlyn Rae has gotten off to a hot start, tallying four goals and two assists. One of these was an equalizing goal with just three minutes to play against Boston University, a contest in which Merrimack drew a tie.

BC won all three of its meetings with the Warriors last season by a combined score of 15-6. The most recent of those came on Jan. 2, 2018, when the Eagles visited Merrimack and came out victorious, 7-3. Caitrin Lonergan, Daryl Watts, and Makenna Newkirk each found the back of the net twice, en route to a dominating offensive performance from the Eagles.

Merrimack has shown early on this season that it will be a tougher opponent to face than in years prior. BC cannot let its guard down to risk losing to an inferior team. In both matchups with St. Lawrence, the Eagles had a noticeable advantage in shots on goal, but they were able to send just one past the goaltender in regulation in each game. Converting shots into goals will be key for this Eagles team as it tries to hit its stride. The road to a sixth-straight Hockey East regular season title will begin on Friday night, and the Eagles will hope to make a statement in their first game of conference play. 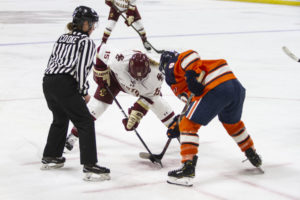