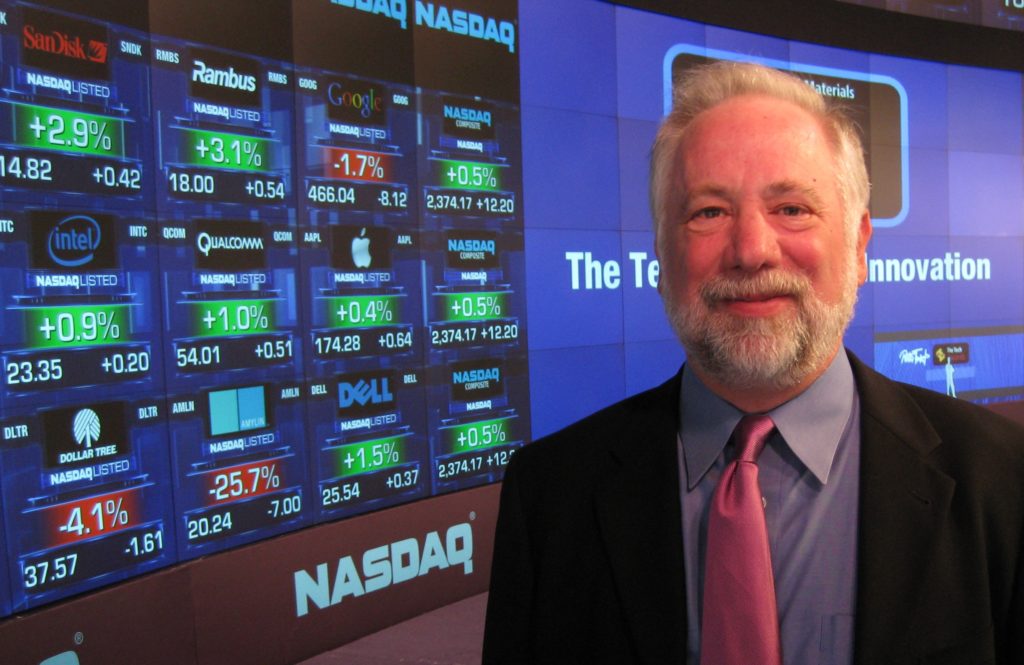 Programs sat on a table next to the entrance of the Fulton Honors Library as former students, colleagues, friends, and family of the late professor James Gips arrived on Friday to celebrate his life. Gips, the John R. and Pamela Egan Chair of computer science, taught at Boston College for 42 years before he died suddenly this past June at age 72.

The booklets contained over 30 pages full of fond memories of Gips that students and faculty treasured, starting with the obituary the University published over the summer. Each memory hit personal notes with familiar and powerful themes—flannel shirts and pizza for Friday classes, mentorship for anyone who sought it, and Gips’ work to empower students with disabilities.

“Atypically for professors, Gips made a practice of sharing student evaluations of his courses on his website,” the obituary said. “That includes the full surveys from the last course he taught, this past semester. Where the evaluation form asks students to suggest ways that the course could be improved, an impressive number of them answered: ‘none.’”

The first speaker of the afternoon was Barbara Gips, his wife of 11 years. She shared stories about the full and loving relationships that he forged with everyone that he knew, starting with herself.

“He made me laugh daily,” she said. “I always thought that was an important thing in marriage—sometimes it was the same joke. He’d come home from BC and say ‘I’m going up to change.’ And then we’d both go, ‘But not too much.’”

From his triweekly lunches with his MIT fraternity brothers to his love of Disney World trips with his kids or grandson, Gips strived to live up to his self-appointed nickname of “Disney Dad.” Barbara recalled always knowing when his kids were on the phone thanks to the big smile creeping across her husband’s face.

“He loved teaching, it was the only career he ever wanted,” she said. “One of the things that will always be remembered about Jim is his relationship with his students. At the memorial service we had in June, three former students spoke passionately and intensely about the role that Jim had played in their lives and in their careers.”

Next up was Rob Fichman, chair of the Information Systems department, where Gips had spent his last 14 years at BC. He reflected on the influence his colleague had in the department’s creation, especially as its inaugural chairperson in 2004.

Although there were only six potential Information Systems professors, Gips plotted to break away from the Operations, Strategy, and Information department. Luckily, it was his former student Andy Boynton’s first year as dean of CSOM.

“After a few years, I took over as department chair and he became a generous mentor to me as I began to face the challenges that come with that role,” Fichman said. “In fact, I spent the first few years playing this game called ‘WWJD?’ … ‘What would Jim do?’”

Two representatives of the Campus School, Barbara Cataldo and Kristen Morin, praised Gips’s work to expand learning opportunities for many of their students. Cataldo, who joined as director of the Campus School in early May, said that while she never had the opportunity to meet Gips, she feels his influence every day.

Gips developed EagleEyes, which allows for people to control their computer mouse by moving their eyes. Another project of his, CameraMouse, relies on head motion and webcams and is free to download. Morin, the marketing and outreach director at the Campus School and BC ’86, shared how his innovation touched her own life.

Morin’s own son, Kyle—who is nonverbal and was diagnosed with a visual impairment, severe cerebral palsy, and spastic quadriplegia—used Gips’s creations during his 17 years at the Campus School.

At age 8, Kyle tested out the EagleEyes program at the Campus School to great success. The program isolated his chin and mapped its movement alone to the mouse.

“The game was a matching game, where you flip cards—Memory, if you’ve ever played that—you flip them to match the words and the symbols,” Morin said. “Somehow, our Kyle flipped through and got a score of eight out of 10. We tried to keep our composure. Kyle was playing the game just like his little sister, who was two and a half years younger at the time …  Everybody was cheering for Kyle. We were speechless.”

Today the Campus School is full of students who pushed past previous limitations thanks to Gips, who ensured that CameraMouse, now sitting at 3.2 million downloads, remained accessible, free, and up-to-date for over 20 years.

The speakers were flanked by two pictures of the professor. In one of them, a smiling Gips holds up a whiteboard to showcase its nine-word message.

Ethan Sullivan, the associate dean of the undergraduate program in CSOM and BC ’94, wrote in the program that the picture is the best possible depiction of Gips’s life.

gips camera mouse eagle eyes
‘If You Build It, They Will Come’: McCartney Rebuilds Communities
Chemistry Department Aims for Collaboration Through Schiller