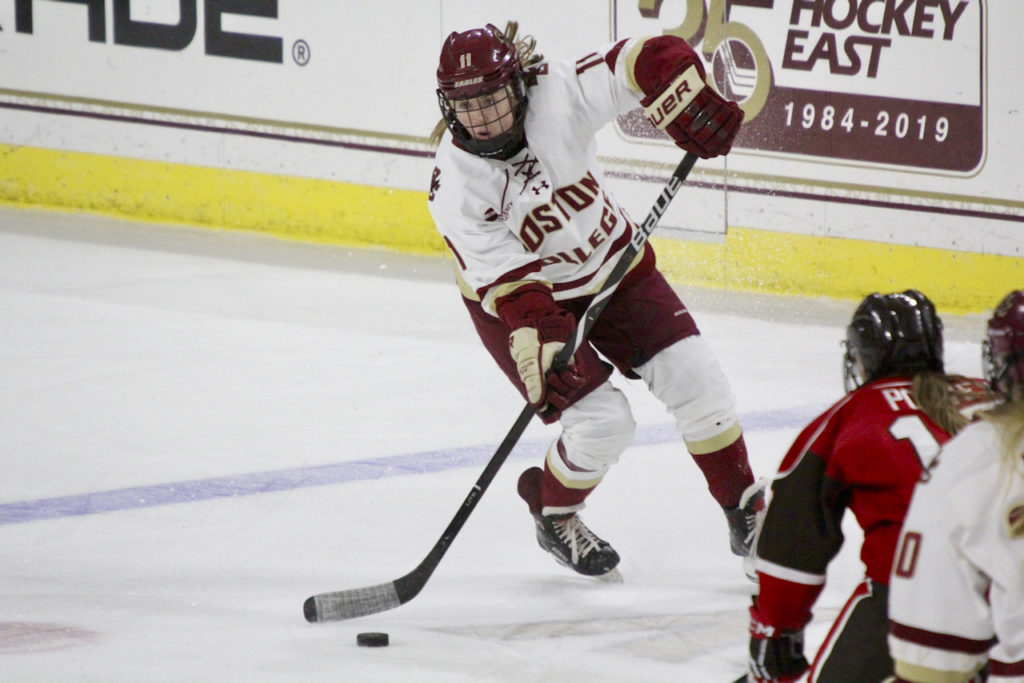 Two Massachusetts programs with drastically different backgrounds will meet for first time on Friday night, and while Boston College women’s hockey and Holy Cross might be in the same conference now, in reality they couldn’t be farther apart. The sixth-ranked Eagles (5-2, 2-0 Hockey East) have made the Frozen Four in three of the past four seasons, while the Crusaders (0-5-2, 0-2) are playing their first full D-I season as a part of the Hockey East after spending last year as an independent. It could be a harsh reminder of Holy Cross’s place in the conference table, especially after getting off to a winless start through two games.

Where is BC playing?
Hart Center, Worcester, Mass.

How to Watch:
The game will be streamed live on the Patriot League Network.

1) Since giving up four goals in the season opener to Minnesota-Duluth, freshman goaltender Maddy McArthur has seemingly taken a step forward in each game. She allowed a lone goal in four consecutive games, then recorded her first career shutout against Vermont on Sunday—lowering her goals against average to just 1.43.

2) McArthur’s numbers are even more impressive in the context of the nation. Her goals against average is good for 14th and her .939 save percentage is 18th. It draws the obvious comparison, however early, to four-year starter Katie Burt, who had similar numbers (1.35 goals against average) through seven games.

3) Three different Eagles scored in the win over UVM, keeping with the trend of the BC offense spreading the wealth. The Eagles have 12 different players with at least one point, while nine have scored at least one goal.

1) The Crusaders have dropped four games in a row, and the games haven’t been particularly close. They’ve lost twice to Brown, and once to Providence and Connecticut, respectively. The four losses have been decided by an average of four goals.

2) Holy Cross has struggled to adjust to the loss of star forward Kara Violette, who scored 16 goals and 24 assists to pace the team a season ago. Without Violette and with a harder schedule, the Crusaders have seen their goals per game drop from 4.1 to a woeful 0.7.

3) This game and Saturday’s matchup against Merrimack will be the first two home Hockey East games for Holy Cross, an exciting milestone for the recently introduced D-I program. The Crusaders didn’t fare well in their first two conference games, getting outscored 12-2.

This will be the first historical meeting between the two teams.

Last season, Merrimack was the worst team in the Hockey East. BC played the Warriors three times and won by a composite score of 15-6. The Crusaders are likely several rungs below that team, so this game has the potential to be an incredibly one-sided blowout. The Eagles have more depth on every line, have an Olympic-caliber defense, and have won five in a row since a bumpy start. BC should be able to score at will against Holy Cross, and the final score will likely just be a matter of when head coach Katie Crowley and her team decided to ease up.