Biology professor Philip J. Landrigan gave a talk on human health, climate change, and pollution Wednesday night based on a report he co-authored that was published in The Lancet medical journal.

Climate Justice Boston College, the Undergraduate Government of BC, and the Public Health Club sponsored the event.

The report, published in October 2017, estimates that 9 million people die each year from pollution, which accounts for 16 percent of all deaths that take place each year.

“[The report on pollution and health] was a very big deal,” he said in a previous interview with The Heights. “We released [the report] in October of 2017, and it got 3,000 media hits and 2 billion readers. I wanted to be able to continue this work because clearly pollution is a big problem—it’s unresolved.”

Landrigan began his talk by showing a photo of Cleveland in 1967 that was obscured by orange air pollution. The picture was taken four blocks from where Landrigan interned at Cleveland Metropolitan Hospital, where, on certain days, smoke would clog the hallways to the point that it wasn’t possible to see down the full corridor, he said.

“Pollution has always been a neglected problem on the global stage,” Landrigan said. “One of our responsibilities, therefore, was to raise attention and to turn that attention into action.”

The report predicts that at the current rate, deaths from air pollution should double by 2050. Pollution is driven by population growth, uncontrolled urbanization, and industrialization, according to the report.

“[Toxic chemicals] are out there and are all around us, in products we use every day,” Landrigan said. “Most people assume that the government is protecting them, but the truth of the matter is that most of the chemicals are untested and you’re on your own.”

Landrigan went on to point out that only about one in five mass-produced chemicals has been tested for developmental toxicity, or its effect on children.

Landrigan and his co-authors involved economists in their report in the hopes of finding the financial implications of pollution. They believed that their report would have more of an effect if people saw that pollution was causing them to lose money.

“You would think that the argument to prevent human suffering would be a sufficient rationale to do something about this problem,” Landrigan said. “The problem is that we live in a complex world where there are many competing priorities, so it is easy to push health and environment to the bottom of the heap … so we decided that we would lay out an economic case for preventing pollution.”

The authors of the pollution report hoped that the economists’ contribution would help to elicit a response from heads of state. The economists found that pollution causes the GDP of low-income countries to decrease by 2 percent and that every dollar invested in prevention yields $30 in benefits in the United States.

On a related note, Landrigan is a supporter of the University divesting from fossil fuels, the primary cause of Climate Justice BC.

The pollution report’s authors concluded that, though there is a lot left to be done to ensure the problem gets solved, pollution is a fixable issue.

“Despite all the problems that pollution causes, at the end of the day, our commission came to the optimistic conclusion that pollution is a solvable problem,” Landrigan said. “The argument is based on the experiences of countries like ours that have put together very complicated, multilayered strategies that have allowed us to control pollution.”

Update (11/13/18, 5:30 p.m.): This article has been updated to note the event’s sponsors, as well as to include the fact that Landrigan supports divestment. 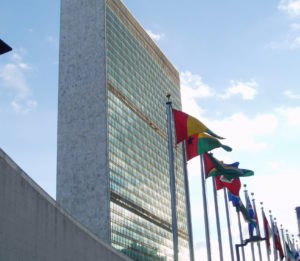