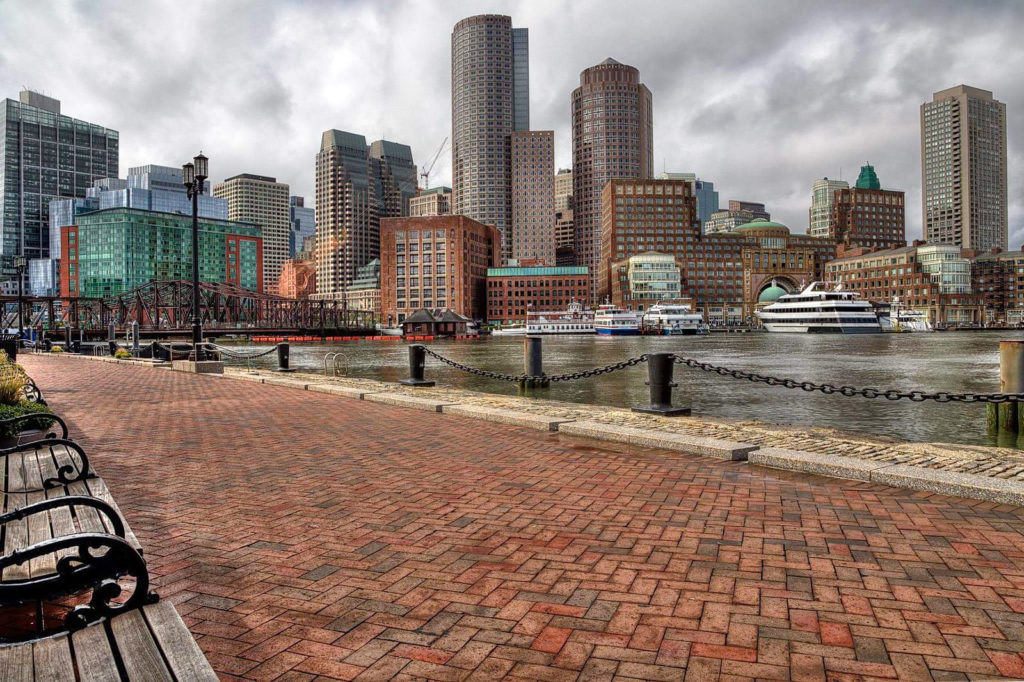 Boston neighborhoods experienced flooding so severe this July that roads became inaccessible, and residents were stranded in their homes. The city also saw record-high instances of high-tide flooding during 2017, according to a report by the National Oceanic and Atmospheric Administration (NOAA) Center for Operational Oceanographic Products and Services, and Boston’s sea level is projected to rise 1.5 feet by 2050, according to study released by researchers at William and Mary’s Virginia Institute of Marine Science.

To address some of the implications that changes in water level can have on the City of Boston, the Cambridge Innovation Center led a discussion on climate change and the future of Boston’s coastline as part of the Long Now Boston Conversation Series on Nov. 5.

Kirk F. Bosma, an engineer at Coastal Sciences and a member of the engineering and planning team at Woods Hole Group, an international environmental services organization, spoke with Paul Kirshen, a professor in the School of Environment at UMass Boston.

They began the conversation with the current environmental crisis at a global level, as sea levels rise because of warming oceans and melting ice caps.

While the interaction of water with the coastline is not uniform, and can never be predicted exactly, Bosma warned that if the Boston coastline stays on its present path, the sea level is projected to rise eight feet by mid-century, which would inflict devastating environmental impacts worldwide, especially in Boston.

“Our local impacts are more severe here than in other parts of the country,” Kirshen said. “Our sea level rise in Boston is happening faster.”

Observances of storms and flooding such as Hurricane Sandy on Long Island have prompted communities and cities at large to examine their own resilience. Boston, in particular, has a sensitive tunnel system at the heart of business and evacuation. The speakers urged residents to ask questions and take action in order to protect the tunnel system.

“What is the probability of flooding? Of the thousands of assets that make up this complicated system, what’s the priority?” asked Bosma. “Because I can’t just go out to a billion-dollar system and dump another billion dollars into it.”

Both speakers expressed the need for more information and resources to be devoted to circumnavigate the issues, specifically to improve storm data and flood prediction maps. Currently, however, the cost of overcoming these roadblocks is infeasible.

“The present flood of information is inadequate,” Kirshen said.

Historical storm data render FEMA maps obsolete for the future, because the information is too generalized to be of use. Flood prediction maps, which use a sliding bar to depict what land is predicted to be underwater, don’t provide viewers with enough specificity to move forward, even if they believe they might be at risk. Bosma and Kirshen have worked with Mass DOT and UMass Boston to develop a high-resolution, probabilistic hydrodynamic model, which includes changing water temperatures as a function of time, dams, river flow, increased rainfall, waves, wind, and the duration of the water’s presence as well as rises in sea level.

In addition, a point-density gradient allows for tracking of large-scale information like storm origin and evolution to proximal data points every 5-10 feet on land. Tracking storms is important because global warming does not only contribute to the rise in sea level—it changes the frequency and intensity of storms.

This level of detail lets people notice, for example, that one vulnerable point is the cause of a large area of flooding. This information can help researchers determine  where to make changes, and how.

One of the solutions proposed was to build a miles-long barrier out in the harbor with locks and gates that could open and close for storm events.

This could be functional in the near future if sea levels remain close to what they are now, but if levels rise and the daily high tide of the future is comparable to today’s storm surge, the barrier could be compromised.

The gates take six to eight hours to open and close, so it would be impossible for them to function effectively in a situation with higher tides. The other option, closing them permanently, would pose other challenges to the enclosed ecosystem.

Additionally, future storms could become so frequent that it is impossible to close the barriers in time. This, combined with the billions of dollars needed to build the barrier, have made researchers look for alternative solutions.

“Shore-based solutions, we build them this high now, and then make the foundations big enough so we can expand it over time as the climate changes,” Kirshen said. “These systems are flexible.”

Flexibility is key, since the future of climate change is uncertain. Shore-based solutions are vastly cheaper than a barrier on the whole, and the cost to install them would be spaced out over time as they are slowly expanded. These could be seashore parks, rolling hills to break up waves, or marshland that simultaneously acts as a buffer. Shore-based solutions don’t have to be limited to protecting against climate change, either.

“Obviously climate change is not the only threat we’re facing,” Kirshen said. “This could be integrated with sustainability planning.”

Bosma emphasized the importance of policy changes and an adjustment in perspective in order to implement these structural changes along the coast.

“A lot of people say, ‘this is bad, what are we going to do?’” Bosma said. “I view this more as an opportunity. We now have an opportunity to do some very unique things, to build co-benefits, to think about a new vision for the city of Boston.”