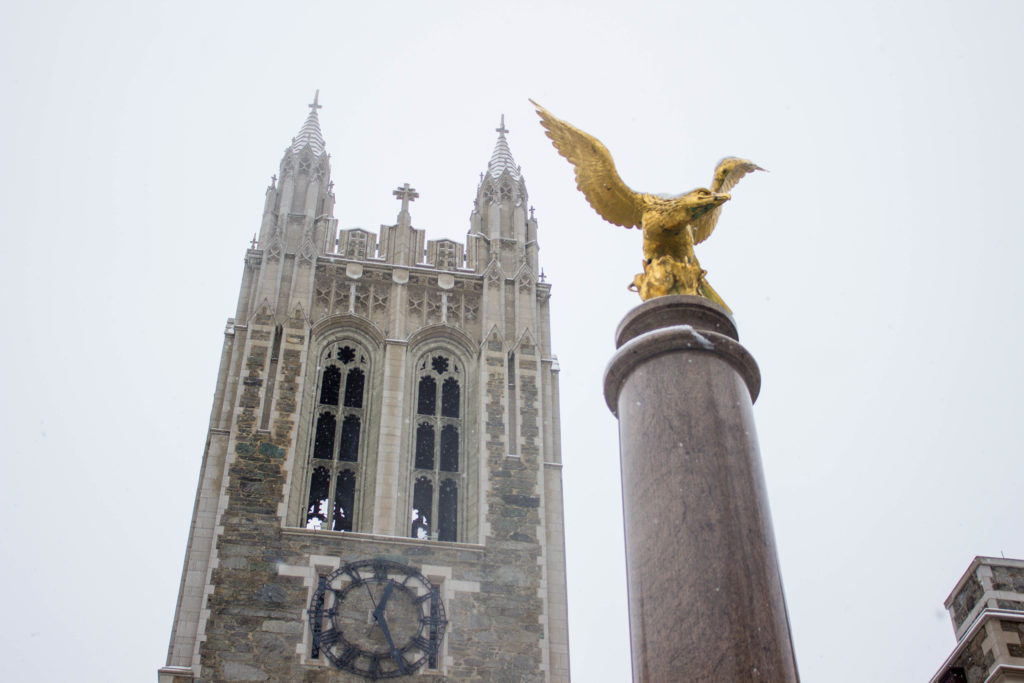 A motion to allocate $600 from the SA’s budget to hold a Student Resources Fair this winter and a resolution concerning “Increased Allocation Of Resources Towards Muslim Students At Boston College” passed in the Student Assembly (SA) of the Undergraduate Government of Boston College on Tuesday.

Proposed by John Gehman, director of the intersections committee and MCAS ’21, the motion to contribute funds to a Student Resource Fair was motivated by the goal to centralize the resources in one spot for students to become more familiar with what the University offers.

“When students are paying $74,000 to go [to Boston College], I feel that students have a right to know what resources they have at their disposal,” Gehman said.

Sponsored by Aneeb Sheikh, president pro tempore, chair of the Academic Affairs Committee, and MCAS ’20, the second resolution of the evening called to affirm UGBC’s commitment to protect and ensure the physical, mental, and spiritual well-being of the diverse identities within the BC community. To do this, the resolution makes a request for three improvements: catering to halal dietary restrictions, establishing a designated space for Muslim prayer on campus, and hiring a full-time Muslim Chaplain in Campus Ministry.

While Lower does offer halal chicken, Sheikh said that additions to the chicken, such as sauce, breaks halal dietary code, as it may contain pork. Sheikh said that many Muslim students can’t eat sufficient amounts of food, because BC doesn’t always offer ample halal options to students. Sheikh expressed concern that dining managers may not be fluent in halal dietary restrictions, which means that, occasionally, they’re unable to offer proper council to Muslim students.

“Every year, freshmen complain to me, ‘I went to the dining hall and there was nothing to eat, and I’m still hungry,’” Sheikh said. “As a Jesuit school that promotes religious tolerance, we really should be making more of an effort to include people who are on the margins.”

Sheikh’s proposed solution to this issue is the establishment of a halal station at the three main dining halls: Lower, McElroy, and Stuart on Newton Campus. This would ensure that Muslim students continuously have their food options properly labeled and always available.

On the matter of faith space, traditionally, the Muslim Student Association (MSA) has used the Multi-Faith Center at 66 Commonwealth Ave., as well as the Maloney Prayer room, for their weekly Friday prayer. Due to increases in the size of the MSA, however, Sheikh said that these spaces are no longer equipped to handle the amount of students that need to be accomodated.  Sheikh also noted that the prayer spaces now are particularly bleak, making it impossible to give Muslim students the sensation of feeling as if they are praying in a mosque.

“[The Multi-faith center] doesn’t give you the same atmosphere as a Muslim prayer space should,” Sheikh said. “We want to have a space where we can have have bookshelf with Islamic books and Qurans, which we can’t currently have.”

Currently, the MSA pays a graduate student from Harvard University to serve as a part-time chaplain. This setup, however, has significant limiting factors, according to Sheikh. Part-timers can only hold Friday prayer at certain times and lack the religious experience that a full-time minister would traditionally have.

“A Muslim chaplain would be an Imam with credentials, who would be able to provide interface services, and be someone who would be here for generations of Muslim students at BC and provide institutional support,” Sheikh said.