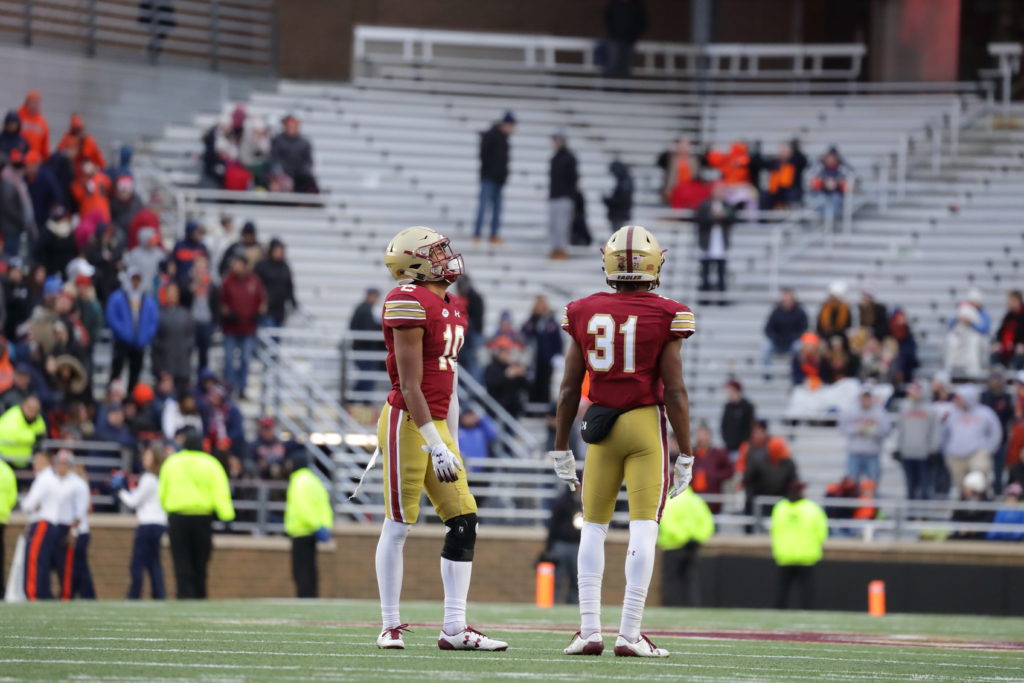 No. 19 Syracuse’s Eric Dungey threw for 362 yards and three touchdowns while running for three more, and Boston College football suffered its third-consecutive loss to end the regular season, falling 42-21, on Saturday. The Eagles (7-5, 4-4 Atlantic Coast) trailed by just a touchdown with 13:26 left in the third quarter after Anthony Brown found Ben Glines for a 29-yard touchdown. But that would prove to BC’s last scoring play, while Dungey guided the Orange (9-3, 6-2) to two more touchdown drives in a rout that flipped the script on last year’s regular season finale in which the Eagles coasted to a 42-14 win in upstate New York.

Here are four things that stood out from a loss that has BC head coach Steve Addazio on the hot seat, especially with the Eagles seemingly destined to finish 7-6 for the fifth time in six years.

In Monday afternoon’s weekly press conference, fresh off handing AJ Dillon the ball 37 times in a loss to Florida State, Addazio said that the banged-up sophomore running back was “gaining ground on this injury” and that he felt that “we’re going to see another level up this week of him.” Instead, Dillon was limping on the sideline just eight minutes into Saturday’s game and would ultimately leave after just 12 carries for 56 yards. It was clear once again that he wasn’t 100 percent—he was hesitant to cut upfield, so any runs on the outside were largely ineffective. Dillon went for 17 yards on one carry, but in his other 11, he averaged just 3.3 yards per rush. It was another frustrating entry in the saga of Addazio handling Dillon’s workload this season, as the sophomore has now left the last four games early.

The defensive line was also hit hard for BC, with Wyatt Ray and Zach Allen both bowing out in their final home game with the Eagles. Ray left early, with redshirt sophomore Brandon Barlow filling in for much of the game. Allen—who has been projected to go as early as 11th in the upcoming NFL Draft—left on the Orange’s first drive after halftime. He went down with an apparent ankle injury after a Moe Neal carry on second down and came off limping, not to return. Marcus Valdez filled in admirably for Allen but barely showed up on the statsheet, managing four tackles. Barlow had a bigger presence, ranking second with 10 tackles, six solo and 1.5 for loss. Still, not having two of the most consistent players rushing after Dungey clearly opened up the game some, as Syracuse kept ahold of the ball for nearly 22 minutes after the break.

Whether it was the snap count Syracuse employed or just simple overeagerness on the part of the Eagles defense, BC jumped offsides a remarkable six times on Saturday afternoon, giving the Orange countless chances to sustain drives. Once, it cost them a considerable gain, as Dungey opted to go the famed Aaron Rodgers way and take shots deep down field. On Syracuse’s first drive of the game, it quickly found itself in a 4th-and-1 deep in its own territory. Dungey lined up under center and drew Connor Strachan offsides, then snapped the ball and aired it out. Wide receiver Sharod Johnson hauled it in with a nice catch down the right sideline for a 34-yard gain, and four plays later the Orange were attempting a field goal.

The other times, the penalties merely extended a drive. Dungey tried to connect with wide receivers deep down the sidelines twice to no avail, but faced no consequences as the Eagles had already given up the first down. The guilty parties were varied—Allen crossed on a 2nd-and-10 in the second, and Smith went over on a 4th-and-5 during the fourth quarter on Syracuse’s penultimate drive. It was a poor display of discipline by a talented unit, and it allowed the Orange to stay on the field for, at the minimum, a fresh set of downs each time. The possession battle in the second half was firmly in Syracuse’s favor, and once the Orange went up two scores, BC desperately needed to play flawless football to have a fighting chance to get back into it. Instead, with the offense struggling, it had two offsides penalties on consecutive fourth downs.

Fans are well familiar with what Lamar Jackson was able to do against the Eagles during his time at Louisville—in his sophomore and junior year matchups combined, Jackson totaled 928 all-purpose yards, six passing touchdowns, and six rushing touchdowns. Mobile quarterbacks have given BC fits in recent memory, and this holds true to 2018. Miami’s Malik Rosier, Virginia Tech’s Ryan Willis, and Wake Forest’s Sam Hartman might’ve all lost to the Eagles—but they all reached 50 rushing yards. Last year, it was even more pronounced, with Notre Dame’s Brandon Wimbush, Clemson’s Kelly Bryant, and Jackson all surpassing 100 rushing yards in a single game. BC hasn’t been able to really contain a quarterback with a good arm and decent legs, and Syracuse exploited that on Saturday.

Dungey created plays with his feet time and time again, accounting for over 350 total yards of offense and six touchdowns. Officially, according to NCAA statistic policies, he finished with 18 carries for 34 yards. That factors in sacks, however, so if you take out his particularly egregious 18-yard sack by Taj-Amir Torres as well as his 3-yard sack by Tanner Karafa, Dungey finished with around 55 rushing yards, a respectable figure. He kept plays alive, such as  when he hustled back to get a botched snap and throw it away—outcomes that the Eagles usually expect to swing their way. BC’s inability to contain him, especially on the goal line, was a glaring weakness that they’ll have to address quickly.

Michael Walker had three fumbles on kickoff or punt returns through 11 games. He’s also been one of the more explosive return men in college football the past two years. Last year, he was sixth in average punt return yardage and 44th in kick returns, and he’s since moved to 10th and 25th, respectively. Against Syracuse, this was on full display, as he rumbled 53 yards on the opening kickoff to give his team prime field position. Unfortunately for the senior, the next time he touched the ball—with his team locked in a 7-7 game—he fumbled it away, losing the ball on the kickoff to Orange punter Sterling Hofrichter. It led to a Syracuse touchdown and a deficit BC would never recover from.

Meanwhile, Will Harris and Lukas Denis, BC’s starting safeties the last few years, each made mistakes that gave their visitors a score. The Eagles’ painful coverage breakdown saw Brandon Sebastian and Torres each on a man, with Harris looming over the top. When Sebastian and Torres got mixed up, Harris was caught staring at the covered man in the middle of the field, and he was one of two (alongside Sebastian) at fault for what was a 75-yard touchdown pass from Dungey to Sean Riley.

Later, when Sebastian was temporarily out with an apparent tweaked ankle, Mike Palmer entered and Denis shifted into a cornerback role—the position he was recruited at as well as where he’s appeared earlier in the year. With the Eagles needing Denis to be in peak lockdown form, he was far from that, instead allowing a ball to sail over him unhindered near the front pylon and into Jamal Custis’ hands for a touchdown.