Mike Lupica, a former writer and columnist for The Heights and BC ’74, returned to campus Nov. 15 to speak to the community about his journalistic career and the moments that have forever changed his life.

Lupica is one of the most successful sports writers in America: He’s served a 40-plus year tenure at the New York Daily News, is a New York Times-bestselling author of 25 sports novels geared toward kids and young-adults, and hosted The Sports Reporters on ESPN for 15 years.

Lupica’s former English professor at Boston College, Paul Doherty, introduced him—Doherty noted that Lupica was the youngest columnist ever at a New York paper when the Daily News hired him and that his former student has become one of the most famous sports writers of his time.

Lupica thanked his professor and began his talk with some kind words about his mentor.

“He was the best English professor I had ever had—he kind of had a sense early on of where I wanted to go and where I hoped I would go,” Lupica said. “He made me a better writer and my life would not have been the same without Paul. He allowed me to dream my dreams.”

Lupica talked about how happy he was to be back at BC talking to young students who want to follow a career path similar to his. He explained that though the newspaper industry has been in decline, students should keep following their dreams.

“If you’re good, the world will find you,” he said.

Lupica talked about the steps that led to his career and how BC played a huge role in setting him up to succeed. He was originally going to go to Syracuse because they had a daily paper, but once he walked across the grounds at Boston College, “Syracuse was out.”

He noted how much he loved his English classes during his time at BC and how he felt that they helped him become a better writer. He learned from Doherty that one cannot be a good writer without being a good reader. While at BC, Lupica was also involved with The Heights, writing for the sports section. After publishing one of his stories, The Boston Globe called Lupica to ask if he would write a piece for its publication.

He is still unsure to this day how the sports editor for the Globe got ahold of one of his columns, but—without hesitation—he agreed to write the piece. The Globe ran his column on the front page, undeniably altering Lupica’s career path. After graduation, he started at the now-defunct Boston Phoenix while working nights at the Globe, before The New York Post hired him away. Lupica wrote four features within the first week of being hired.

“I was hired out of a complete obscurity,” he said.

He was only 22 years old and a very recent graduate from BC. Lupica went from writing for his school paper to writing major pieces for the Post, something he never thought would have happened, but he thanked BC for giving him the intellectual foundation to fuel his success. He went on to send four of his children to the University—but he noted that BC is far different now than it was during his days on campus.

Lupica has had the opportunity to watch the University evolve over the past 20 years when his children were attending BC, but he said the changes all started with the famous Doug Flutie Hail Mary. With that pass—and the catch by Gerard Phelan—BC became a news story all over the country, expanding its admissions and receiving more applicants.

“I always stop and rub the statue for luck because it’s never been a bad thing knowing Flutie,” he said.

The biggest change in his life and career was yet to come: When his son and his friends didn’t make their basketball team, Lupica started an intramural team for the kids who got cut. The team wasn’t good at first—almost to the point where Lupica wanted them to stop because he thought the experience was worse than the group not forming the team in the first place.

Then, they got better.

“It was one of the coolest things I’ve ever seen,” Lupica said. “If you’re in my world, you’re looking for great stories, and I knew I was watching one. Everything that I hoped would happen, had happened—I can’t let go of this, I know I have seen something awesome.”

He decided to write a book, titled Travel Team, about his son’s intramural basketball team and how they made the transition from being awful to excellent through hard work and perseverance—he couldn’t pass up such a great story.

“The problem with a really good idea is that once it gets in your head you can’t get it out,” he said.

He started writing the book, and as he wrote, he would give the pages to his three boys to read. They loved every page they read and kept asking for more.

“That book did change my life,” he said. “I didn’t start the team to write a book—I started it to start a team.”

To Lupica, Travel Team was emblematic of his career—a humble beginning that blossomed into a tremendous success. That journey doesn’t happen without his time at BC, according to the author.

“My life started to change when I was writing for The Heights,” Lupica said. “Everything that has happened and everything that has framed me as a writer started at this school. I identify myself first and foremost as a Boston College man.” 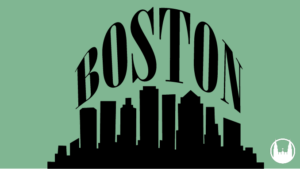