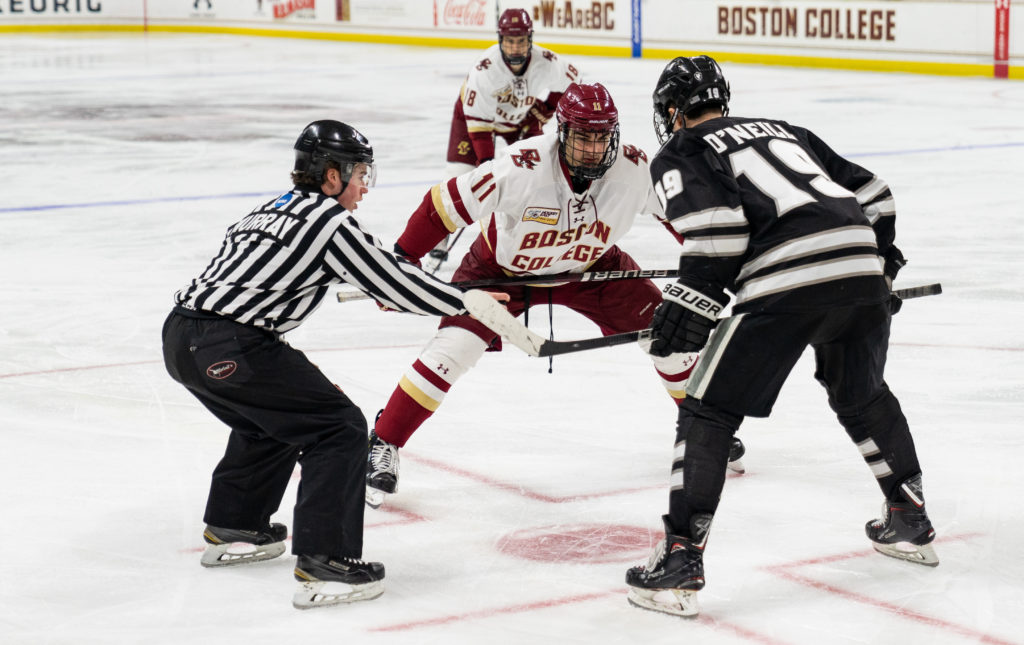 After back-to-back losses this past week, Boston College men’s hockey picked up a much-needed conference win with a 4-1 upset of No. 10 Providence. It was a physical game for both teams, featuring a lot of tension and aggressive play. BC (8-11-2, 8-3-2 Hockey East) had the majority of the chances, knocking off the Friars (13-7-4, 6-5-1) for the second time in as many games—no small feat as Providence has been one of the best teams in the nation.

The Friars have given the Eagles some trouble in past years, but Saturday night belonged to Jerry York’s team from the outset. BC avoided succumbing to an early Providence comeback effort and kept possession of the puck at crucial times, even though there was a lot of pressure from the visitors. The Eagles beat Providence last Friday night, 4-2, making this their second straight win against the Friars and therefore winning the season series. Here’s five things that stood out in the victory, which sets the team up well going into a home-and-home series with Massachusetts Lowell.

Faceoffs: When it comes to faceoffs, BC lost quite a few to Providence—an uncharacteristic setback for a team that stakes a lot of pride in winning that battle. The Friars finished with a 35-27 edge, despite the Eagles entering as the best faceoff team in the Hockey East and seventh in the nation. It was back and forth between the two, as BC’s Christopher Brown (13 wins) and Aapeli Räsänen (7 wins) were effective in the faceoff circle. David Cotton, however, was 1-of-7 and J.D. Dudek was 2-of-13, allowing the Friars a slight advantage that they’d ultimately fail to capitalize on.

Scoring: At times this season, the Eagles have had a tough time scoring goals but managed to overcome this shortcoming by executing offensively in the early going. They started out hot with a goal from Michael Kim, 10 seconds into BC’s first power play and just three minutes into the game. It was a sign of things to come, as the Eagles got a shorthanded goal from Cotton, another from Chris Grando, and ultimately a penalty shot from Brown. It was the second time in two games that BC piled up four goals and was a far cry from the shaky offensive effort displayed in a midweek loss to Maine.

Power Play: Over the course of six total minutes with the one-man advantage, BC managed to take five shots and find the back of net once. The Eagles’ efforts on power play were respectable, as they finished 1-of-4 on the day with one goal to their name. BC held its own on the penalty kill as well—the Eagles allowed one power-play goal after Graham McPhee went to the box for cross-checking, but also later denied any good scoring chances when Luke McInnis and Marc McLaughlin were both sitting during the third period.

Frenetic: For the majority of the game, the Eagles maintained possession of the puck and protected the net, even though there was a lot of tension and aggressive play throughout regulation. At the end of the first period, Providence put a lot of pressure on BC—with multiple shots on goal—but goaltender Joseph Woll was on his A-game and thwarted their many efforts. In the third period, after BC scored twice, the action heated up again when the Friars frantically tried to come back and were a lot more up-tempo in their play. The strong rivalry was noticeable on the ice, but BC’s lead only increased as the game went on.

Woll or Wall: Woll was a key factor in turning back the Friars efforts, with 25 saves on Saturday. The lone blemish on his night was a controversial one, too. In the second period, Providence’s Bryan Lemos hit the puck into the crease as Jason O’Neill was rushing the net. O’Neill successfully deflected the pass before crashing into Woll and scoring a disputed goal. The refs confirmed the play and it brought Providence its first goal of the night, tightening the score to 2-1. This minor setback didn’t stop Woll from having a good day at the office, though, as he held Providence scoreless the remainder of the night and led BC to a much-needed victory.