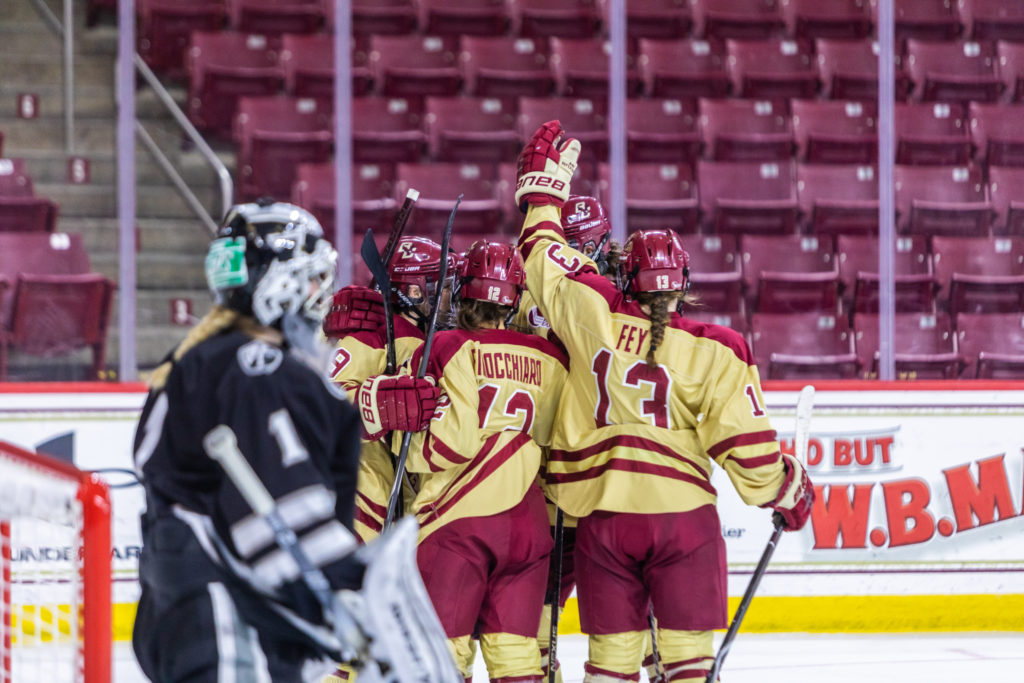 Belinskas, Keller Pace BC Past Providence for Fourth Straight Win

Boston College women’s hockey forward Delaney Belinskas was a unanimous All-Hockey East Rookie Team selection two years ago, posting a 33-point campaign in her first year on the Heights—even tying for the team lead in goals. Last season, though, with the likes of Patty Kazmaier Award winner Daryl Watts and teammate Caitrin Lonergan dominating chances, Belinskas spent much of the year on the third line and scored just three times.

This season, with the return of the three Olympic athletes, including the current leading-scoring defenseman in the country, it seemed Belinskas was poised for a similar season, where she saw her production dip to just 14 points. The first 22 games gave every indication of that, with the junior managing just four points, three coming in a three-game stretch against the dregs of the conference. The last four games, though, have seen her freshman self emerge, and it’s been instrumental in producing four-straight wins for an Eagles team desperate for momentum in the back half of the year.

On Friday afternoon, Belinskas scored twice, extending her points streak to four while guiding No. 9 BC to a convincing 4-2 win over rival Providence (17-8, 11-7 Hockey East) in the first game of a weekend home-and-home series.

“It’s a nice win for us,” head coach Katie Crowley said. “Coming into this weekend, we knew it was a big weekend for us, and to get the first one in our building is great. When all six players are playing together on the ice, it really shows through how we can play and how good we can play.”

The Eagles (17-9, 14-7), who limped into the second week of the new year with six losses in their last seven games, have responded with a strong push that has them within three points of first place and No. 3 Northeastern for the conference lead. Belinskas, meanwhile, now has six goals and an assist in her last four games, keeping pace with teammate Megan Keller, who was busy extending her points streak to six with a goal and an assist.

Her first goal came just a minute and a half into the contest. Keller dug out the puck behind the net and found the Port Orange, Fla. product streaking into the slot, where her prompt one-timer gave Providence goaltender Madison Myers no chance to save. Then, eight minutes into the second period of a tie game, Belinskas struck again. After strong defensive play from the Eagles forced an odd-man rush, Meagan Beres found Belinskas right outside the crease on Myers’ weak side. A dive from Friars defenseman Whitney Dove nearly broke up the centering pass, but instead it slipped through to Belinskas, who had no problem tucking the go-ahead and eventual game-winning goal away.

Keller added an insurance goal four minutes later, with the Eagles using Belinskas’ goal to firmly take control of the game for a stretch. The puck spent a good chunk of that time in the Friars’ offensive zone, cycling around before a shot attempt from Jillian Fey skipped wide. Teammate Makenna Newkirk was there to scoop it up, though, and she found a wide-open Keller outside the crease. There, the senior captain one-timed it high past Myers, setting a new Hockey East scoring record for a defenseman in the process.

Providence continued its midseason slide—the Friars have lost four of their last five and fallen all the way to the receiving votes section of the national polls. They weren’t without chances on Friday, even controlling the pace of play and the balance of the chances for stretches, but it was clear which team was better from the second period on.

The lone goal for Providence came in the first period, with Meaghan Rickard needing just four minutes to answer the opener from Belinskas. It was nearly identical to BC’s goal, with teammate Maureen Murphy getting the puck along the wall behind the Eagles’ net and sending in a good pass to Rickard, who was easily able to beat Maddy McArthur—who finished with 20 saves—with a hard wrister. This prompted a strong stretch of play for the Friars, with Rickard getting a 2-on-1 chance just moments later, but McArthur and the Eagles defense didn’t crack. They were tested again on a power play near the end of the first, but Dove hit the right post—one of three shots in two minutes for the junior—and the game stayed tied.

The rest of the way, though, save for Dove hitting the post while on another power play in the second, BC was largely in control. It pushed its lead to four at the outset of the third period, with Lonergan needing just four minutes to score for the third time in two games. Beres put a puck on net from near the blue line and it was deflected to the waiting stick of Lonergan by Myers.

By the third period, the Eagles were playing incredibly loose. Providence grew frustrated—hits after the whistle in front of both goals came in—but BC never lost its composure. One particularly egregious hit came when Friars’ forward Caroline Peterson—after a scrum in front of the net—cross-checked Watts into the goal.

The ensuing power play resulted in nothing for BC—the 22nd man advantage in a row without a score for the Eagles. Peterson would find the back of the net in the waning minutes after Belinskas went to the box for cross-checking in the final minute, running BC’s stretch of games in which it has allowed a power play goal to five of its last six. These struggles, both on the advantage and the kill, raise questions down the road—but BC still scored four goals against the conference’s second-best defense and looked firmly in control for the most part.

“Honestly, I think we’re getting a little too lackadaisical on it,” Crowley said of the power play struggles. “We’ve switched it around here and there. We’ll keep working on that—obviously special teams are huge. We need to find a way to straighten that out.”

It’s impossible to say the offense is firing on all cylinders with the aforementioned power play struggles that date back to early December, but the team has piled up 20 goals in its last four games and looks the part of a team that can challenge the Huskies up top. A tough road game in Rhode Island looms, as does the always-competitive Beanpot, but if BC plays the way it did against the Friars on Friday afternoon, it is closing in on being considered as back to near its full potential.