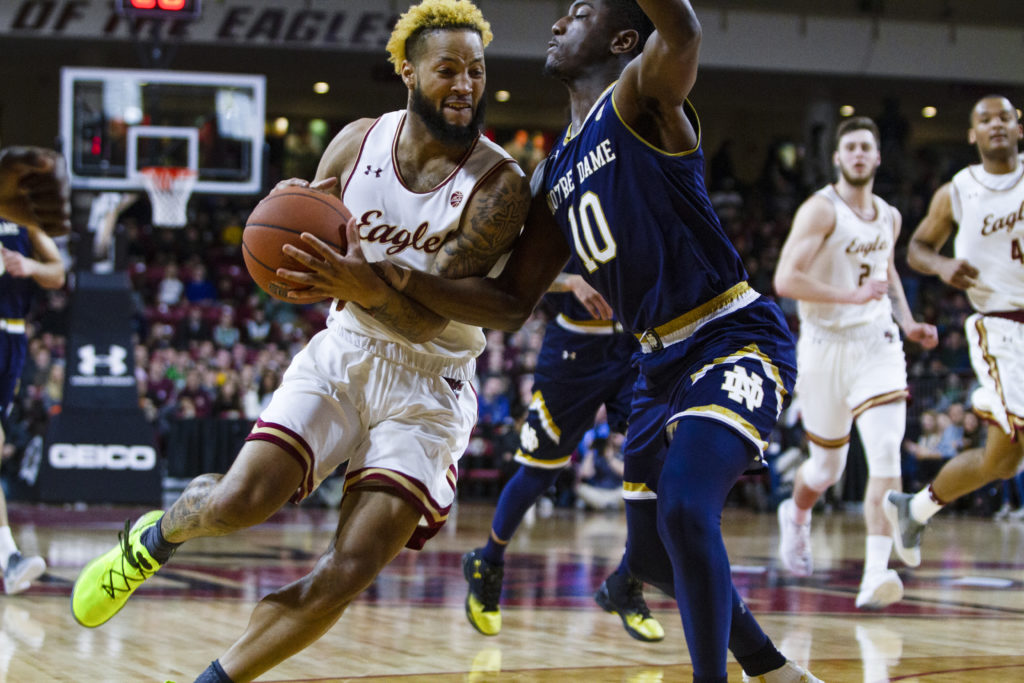 Two and a half weeks ago, Notre Dame guard Nikola Djogo traveled twice in just three minutes of action at then-No. 13 North Carolina—admittingly, head coach Mike Brey lost confidence in the 6-foot-7 Hamilton, Ontario native. But with only seven players at his disposal and one win in ACC play, the longtime coach couldn’t shelve anyone, especially a guard. Still missing Rex Pfleuger and Robby Carmody—two opening-day backcourt starters—Brey went back to Djogo during Monday’s game against Duke. The 22-point loss might have been a wash, but Brey liked what he saw from Djogo, who tallied seven points in 21 minutes of play.

Five days later, the lengthy Canadian was in the starting lineup. To say he made the most of his opportunity would be an understatement. Djogo entered Chestnut Hill averaging a mere 8.5 minutes and 1.9 points per game, but a typical Boston College men’s basketball fan would have never known that was the case on Saturday.

In fact, Djogo shot 7-of-10 from the field, accounted for four of Notre Dame’s 10 triples, and racked up a team-high 21 points—nine more than his previous career high. BC had no answer for the junior, or really any of the Irish for that matter, allowing Notre Dame to eclipse the 75-point mark in conference play for the first time all season as Brey’s team handed the Eagles a 79-73 loss—BC (11-9, 2-6 Atlantic Coast) is now 0-12 all time against the Irish in ACC competition.

Wynston Tabbs missed his fifth game of the year—and second straight—with a left knee injury and was seen sitting on the bench with crutches during warmups, but the Eagles’ offense more than held its own, in large part thanks to Jared Hamilton. The Georgia Southern transfer built off a season-high 12-point performance against Syracuse with another double-digit outburst on Saturday: Hamilton repeatedly broke the Notre Dame (12-10, 2-7)  zone, dialing up a number of mid-range jumpers, and finished 8-of-9 from the floor with 17 points. For much of the first half, he and Ky Bowman were the only BC players to make any sort of impact.

In fact, the guard tandem notched 14 of the Eagles’ first 16 points. The Irish, on the other hand, featured a more distributed scoring attack from the get-go. Fittingly, Djogo got Notre Dame on the board on the opening possession, cashing in on a T.J. Gibbs inside pass. Then, in the ensuing minutes, John Mooney, Djogo, and Prentiss Hubb dialed up 3-pointers. The flurry of triples was just the start of the Irish’s best perimeter shooting performance in ACC play this season. Prior to the weekend, Notre Dame was converting just 32.8 percent of its long-range attempts—not to mention only 30.6 percent against league opponents—ranking 243rd in the nation in the deep ball department, per KenPom.com. For the first time in weeks, Notre Dame’s offense looked recognizable.

“We’re scoring a little bit, we’re moving the ball—I thought our movement was good—and that’s a little bit of what I remember from our program offensively,” Brey said. “We’ve put so much pressure on ourselves because we’ve been scoring in the 60s for most of January.”

That said, there was a stretch where it appeared that neither the Irish nor BC would top the 60-point barrier. Between the under-12 and under-eight minute media timeouts, neither team put the ball in the basket, and Notre Dame committed three turnovers. Clinging to an 18-16 lead, the Irish eventually found their stroke again, and the Eagles soon followed.

Hubb and Djoko knocked down a pair of 3-pointers before D.J. Harvey got in on the fun with a trey of his own, extending the Irish lead to 10. Jordan Chatman was quick to cut BC’s deficit to single digits, but the Eagles’ jump shooting could only do so much when Hubb was having his way with the BC backcourt on the other end of the floor. Whether it was driving to the line or finding space on the outside, he—coupled with Djoko—was a thorn in the Eagles’ side. Dane Goodwin and Bowman traded 3-pointers in the final seconds of the half, as Notre Dame walked to the locker room with a a 36-31 halftime advantage.

The second half started with a 1-on-1 matchup between Nik Popovic and Mooney. The two big men battled it out, swapping the first four scoring plays of the latter portion of play. Yet, in due time, Jared Hamilton stole the show. With a little less than 17 minutes remaining in regulation, the 6-foot-4 guard slipped past Hubb on the break, received a bounce pass from Chatman, and elevated for an emphatic two-handed dunk, energizing the Conte Forum crowd in the process. The highlight-reel play seemed to light a fire in Hamilton—for the next five or so minutes, he couldn’t miss even if wanted to.

Over the course of that span, Hamilton connected on all three of his shot attempts—successive jumpers and a corner 3-pointer. He wasn’t alone either. BC began the second half 12-of-18 from the floor (66.7 percent), courtesy of the mid-range shot. In addition to Hamilton, Bowman and Chatman spotted up from just above the ACC logo to crack Notre Dame’s zone en route to a 54-53 lead. Unfortunately for head coach Jim Christian, his team couldn’t string together stops on the other end—and eventually the shots stopped falling.

Shortly after that, the Irish capitalized. A pair of Djogo free throws and two Notre Dame layups established a five-point gap. Before the Irish could get comfortable, however, the Eagles’ veteran scorers—Chatman, Popovic, and Bowman, all of whom finished with 14-plus points—came back to life, shedding their deficit to just one.

BC could only rely on its offense for so long, though. With under three minutes to go, Notre Dame reclaimed its five-point cushion with back-to-back layups, the second of which consisted of Djogo easily blowing by both Bowman and Popovic for two. Needing a field goal to stay alive, Popovic’s inside shot rolled out of the cup, and Chatman’s second-chance 3-pointer misfired. The Irish tacked on four free throws, rendering Popovic and Bowman’s last-minute baskets obsolete. Regardless of the outcome, Christian refused to make excuses in the postgame press conference, as per usual.

On Saturday, Brey got more out of his own injury-riddled roster than Christian did out of his rotation that includes an NBA prospect, an ESPN 100 recruit, and one of the better 3-point marksmen in the ACC. And Djogo—a third-string guard who hadn’t reached double figures all year—was his posterboy.