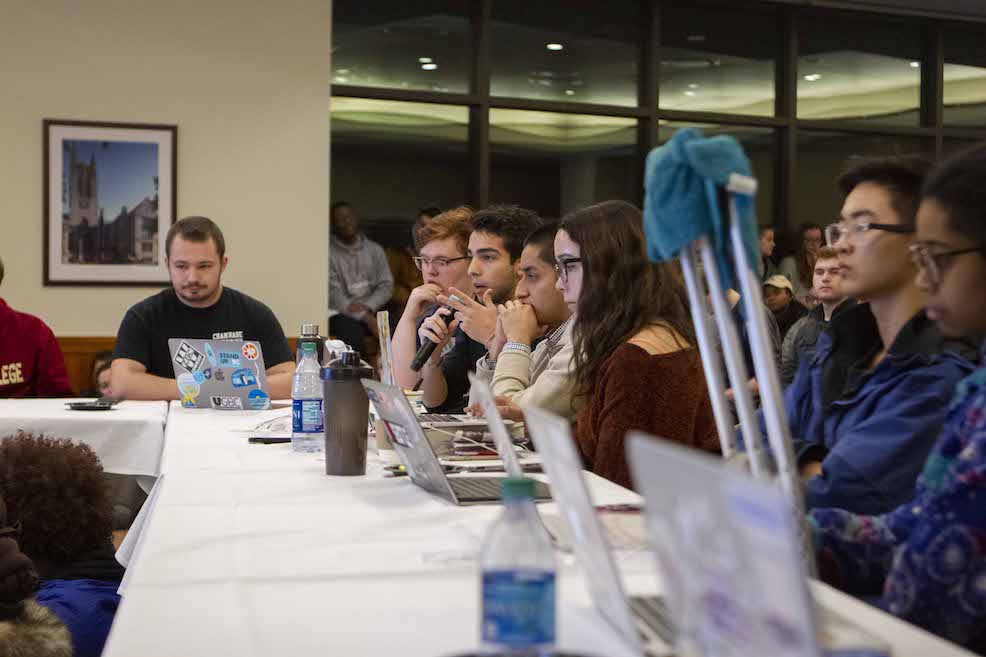 Interim Vice President of Student Affairs Joy Moore penned a letter in response to the Undergraduate Government of Boston College’s hate crime response resolution. In the letter, Moore, on behalf of the University, rejected most of the provisions in the resolution.

Reed Piercey, UGBC president and MCAS ’19, characterized the letter as “disappointing but not surprising.”

“The response letter was very typical of the BC administration,” he said. “It very much was a statement of what the institution itself believes, and in that sense, yeah, I think it was very unsurprising.”

Taraun Frontis, UGBC vice president of diversity and inclusion and CSOM ’19, also voiced his disappointment in the response.

“We’re thinking about it in terms of, what can students really do if we’re just put off,” Frontis said. “UGBC, we’re supposed to be the bridge between the students and administration, so what’s our role if we’ve just been kind of, shut down?”

Michael Osaghae, chair of the AHANA+ Leadership Council, MCAS ’20, and a candidate for the upcoming UGBC presidential election, echoed this sentiment while adding that the student body needs to take charge of the issue and keep pressing for change.

“Initially I was disappointed in reading it … but I reflected on it, read some more, and realized that, in the end, students … all have a common issue of wanting a better BC,” Osaghae said.

Piercey added that he is glad that BC is going to host a series of smaller community gatherings, saying that it was the only part of the letter he viewed as constructive. He noted that many of the steps BC is taking to combat racism on campus are minor actions that lack a sense of urgency and have no long-term effects.

“Those are smaller-scale things, but when students try to get input on the functioning of the institution, and on these rules and policies that could potentially make this a safer and more welcoming community, I think what we see is this, basically, that it gets, not shut down, but kind of overlooked, intentionally,” Piercey said.

He added that BC’s lack of an effective response has a severe effect on the student body, particularly students of color.

“I think students at least see the letter as a step in the right direction because we’re getting a response for something that’s been called for,” Osaghae said, while admitting that he does not think that the letter will effect much change.

Aneeb Sheikh, UGBC director of the academic affairs committee and MCAS ’20, noted a lack of specificity in the response. He continued by saying that there could have been a lot more tangible, time-bound, and measurable aspects of the administration’s plan. Sheikh suggested the vague nature of the response stems from an absence of conversation between students and administrators.

Piercey emphasized that he thinks some administrators at BC genuinely care for students and are working hard to help them, but they are limited by the constraints of the institution.

Sheikh expanded on this critique by adding that BC tends to defer to other universities when it benefits the administration, but adds that without student opinion, administrators aren’t considering initiatives to give students things they want, like an LGBTQ+ resource center on campus.

“I think there are a lot of individual administrators who personally feel for students here who are really trying their best and really trying to work with people,” Piercey said. “But I think they’re all inherently limited by, again, the structure of BC.”

Frontis expanded on this concept, saying that there is a structural problem that causes BC to be reactionary, rather than preventative in its efforts concerning racial issues.

Osaghae said that he would like to see University President Rev. William P. Leahy, S.J., make a statement condemning the racist acts that have been occurring on campus, but reiterated that students must focus on making progress.

“I know a lot of students want to hear from Father Leahy,” Osaghae said. “It’s something students should not stop calling for, however, what are we also going to do as a student body to change and engage each other … What can we do ourselves to be the change?”

Correction (2/7/19, 12:17 p.m.): In an earlier version of this story, Taraun Frontis’ name was spelled Tauran, which is quite wrong. This article has been updated with the correct spelling.