Home » ACC Power Rankings: Again, It’s Duke and Everybody Else 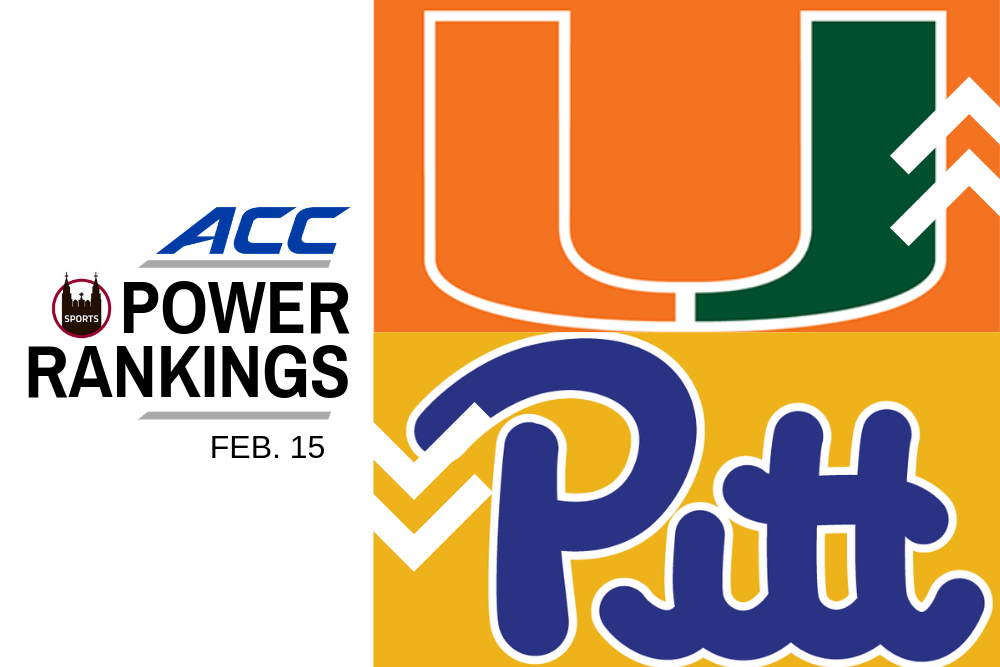 ACC Power Rankings: Again, It’s Duke and Everybody Else

It doesn’t seem to matter if Duke is down by 23 or up by 23, it has moments of pure dominance where it just seems unfair that it’s playing in the same conference as the likes of Boston College and Wake Forest. So, once again, the top four teams remain unchanged in the ACC Power Rankings, with the Blue Devils running the show after a weekend that was punctuated by a season sweep of second-place Virginia.

When it trailed to Louisville by 23 points, Duke head coach Mike Krzyzewski told his team that “you’re not losers, but you’re playing like losers.” To say they responded adequately would be an understatement, with the Blue Devils rallying for an incredible come-from-behind win, its eighth straight. Zion Williamson, once again, was the team’s most valuable player, boasting a stat line of 27 points, 12 rebounds, and three steals. Good luck putting together a full game against this team, there’s no quit in Duke.

The only two losses this season for Tony Bennett’s bunch have, fittingly, come against the vaunted Blue Devils. The Cavaliers rebounded from the latest defeat with a narrow eight-point win over North Carolina, proving that they’re going to be just fine. UVA lost the first meeting with Duke by two points, then couldn’t keep up with an unusual 3-point shooting day from the Blue Devils in the second game. It has the talent and depth to string together a full 40 minutes and knock off Williamson & Company.

The Tar Heels saw an impressive seven-game win streak come to an end against UVA, but they kept it close. The first 10 minutes of the second half was all UNC, going on a 20-9 run to erase an early deficit and take a four-point lead. The Tar Heels went cold in the back half, though, and were doubled up by score en route to the 69-61 defeat. UNC remains an incredibly balanced team—it’s ninth in offensive efficiency and 21st in defense. Throw in the fact that it boasts the third-shortest possession length in the country, and it poses a unique matchup problem.

The Cardinals started playing scared after they built a 23-point lead on Duke. They milked possessions, slowed it down to avoid turnovers, and tried to prevent long rebounds. The result? The Blue Devils came roaring back and handed Louisville a heartbreaking loss at home. That’s back-to-back tough losses—it dropped an overtime decision to Florida State over the weekend—but Chris Mack’s group ranks 18th in both offensive and defensive efficiency and has the look of a serious contender.

After a dismal showing against UVA back on Jan. 5, Seminoles head coach Leonard Hamilton talked about how injuries and inconsistency were holding his team back from its full potential. FSU would lose two of its next three games, but they have come surging back, unleashing six straight wins and showcasing a potent array of talent. Everyone is contributing, as a different player has led the team in scoring in each of the last three games. The latest? Christ Koumadje dropped 20 points in a 22-point drubbing of Wake Forest.

The Hokies’ offense has slowed without Justin Robinson—his absence was missed in defeats to Louisville and Clemson. Regardless, VTech is still a tough team with versatile players up and down the rotation. The Hokies have small-ball lineups that cause opposing teams fits, and Nickeil Alexander-Walker has stepped up well. They hit 13-of-30 attempts from beyond the arc in a Wednesday night win against Georgia Tech—a 43.3-percent clip that shows just how dangerous they can be from long range.

In a result many didn’t expect, N.C. State buried Syracuse in a comfortable 15-point win on Wednesday night. The Wolfpack held the Orange to a woeful 0.81 points per possession and now ranks 47th in defensive efficiency. Throw in the fact that N.C. State can score—it’s 36th in offense and has an up-tempo style of play—and it looks the part of a strong middle-tier team in the conference. Save for a surprising loss to Wake Forest on Jan. 15, the Wolfpack has six conference losses that are understandable—vs. UNC, at Louisville, vs. UVA, vs. VTech, at UNC.

Like FSU, Clemson has rebounded from a similarly bad 1-5 start in conference play. The Tigers have won four of five, the lone setback being a narrow one-point loss to Miami. Clemson is leaning on a top-15 defense, with no opponent cracking the 70-point mark in its last five games. The next few contests will determine if the Tigers are for real, though, as they have to bounce back from a road loss to the Hurricanes with games against Louisville and the Seminoles.

The Orange generally seems to like playing on the road—it entered Wednesday boasting wins over Duke, Notre Dame, and Ohio State away from home—but that sentiment came crashing down in the loss to the Wolfpack. Tyus Battle failed to reach double figures, and a 21-point performance from Frank Howard was offset by the fact that the rest of the team was 0-of-14 from distance. The Orange has its flaws, and blowout losses to FSU and N.C. State reflect that this is another Jim Boeheim team that will be difficult to pin down.

After taking UNC to overtime and coming up three points short, the Hurricanes showed no weariness by taking down a tough Clemson team. Chris Lykes (21 points) and Dejan Vasiljevic (22 points, 5-of-10 from deep) did the heavy lifting for a team that is largely playing a six-man rotation. There’s not a lot of depth, and that’s going to catch up to it, but Miami was a missed shot away from spinning a three-game win streak after starting conference play a woeful 1-8.

The Irish bench has gotten slightly bigger—we’re seeing more from freshman Nate Laszewski—but depth is still a weakness. It didn’t matter on Sunday night against Georgia Tech, with Notre Dame piling up 1.04 points per possession against one of the conference’s best defensive teams in an important win. Four Irish reached double figures with T.J. Gibbs hitting 20 points for the first time this season after managing to do so nine separate occasions last year.

The skid hit six with an eight-point loss to VTech on Wednesday night, the latest loss in what has largely been a murderer’s row of opponents. The Yellow Jackets lost to Duke, UNC, FSU, Clemson, Notre Dame, and the Hokies. What’s remarkable is even after that stretch, GT still ranks 14th in adjusted defensive efficiency. It’s a shame that Josh Pastner’s team is far and away the worst offensive unit in the conference, ranking 271st in the same category on the other end of the floor.

A win against Pittsburgh snapped a four-game losing streak, but the Eagles are in all kinds of trouble. They haven’t had a full complement of starters in forever, with the latest injury a concussion suffered by starting center Nik Popovic. As guard Wynston Tabbs is still out, Steffon Mitchell is in and out of the lineup, and Jordan Chatman even left the latest game with a lacerated finger injury, it seems like the injury gods are out for blood. BC will likely limp to the finish line—it’s far from a guarantee that it surpasses four conference wins.

The Demon Deacons escaped the bottom of the cellar by knocking off Pittsburgh in overtime, but don’t worry, they’re still bad. They lost their next game by 22 points, and that’s a trend that’s been startling consistent throughout conference play. Prior to the win over the Panthers, Wake Forest had lost five straight games by an average margin of 19.6 points. The Demon Deacons have really been struggling to score, as they rank 334th of 353 teams in effective field goal percentage.

Well, everything comes crashing down eventually. That’s been the Panthers the last few weeks, with the losing streak reaching eight after an anemic offensive showing against BC on Tuesday night. Pittsburgh has hung with teams at times during the rough patch, but it’s a youthful bunch, and that never pans out in the ACC—unless you’re Duke, with a plethora of five-star NBA draft picks. A bright spot has been the play of senior Jared Wilson-Frame, who has posted double digits in points in all eight of the losses.