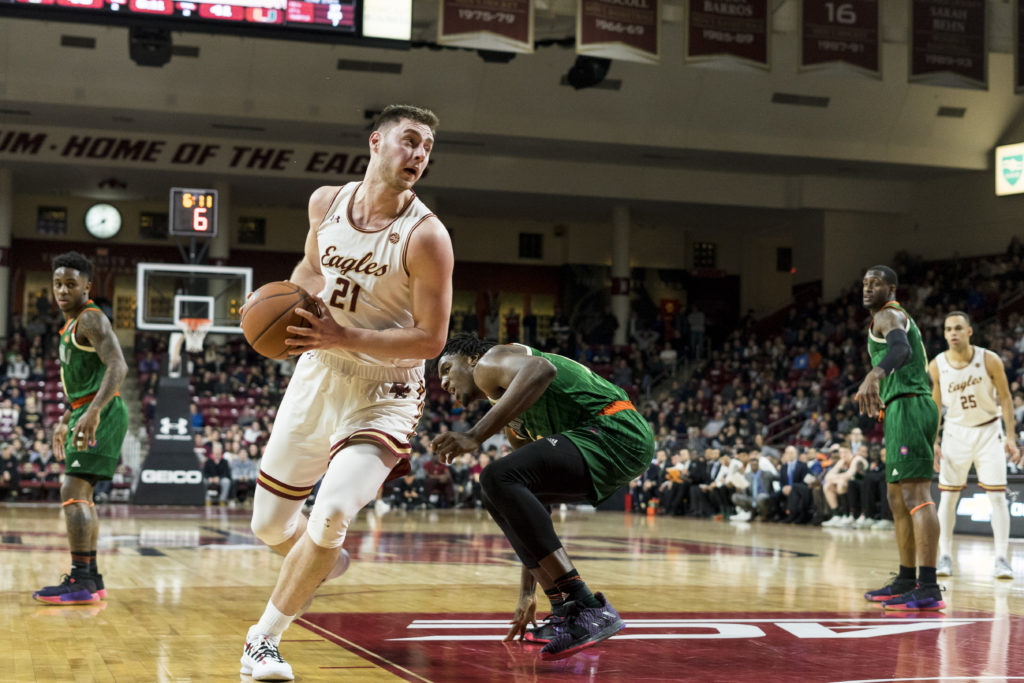 With Jerome Robinson in the house, it felt as if it was 2017-18 all over again. As the former Boston College men’s basketball star took his seat by the baseline—his first time in Conte Forum as a fan—all eyes rested upon him and his old teammate Ky Bowman, the latter reportedly battling a 102-degree fever as recently as Saturday afternoon.

Although Bowman still managed eight assists, his six points over 39 minutes were his lowest total of the season, snapping a 32-game double-digit scoring streak that dated back to last year. Even then, though, the Eagles were able to use 32 combined points from upperclassmen Jordan Chatman and Nik Popovic to cruise to a 64-57 win over Miami.

Despite the win, it’s worth noting that both teams have struggled mightily in conference play thus far. BC (13-11, 4-8 Atlantic Coast) head coach Jim Christian has increasingly found his name in the “hot seat” conversation as of late, and entering Sunday night’s game, Miami (11-14, 3-10) had yet to win a conference game on the road.

On top of that, both the Eagles and Hurricanes have sustained conference losing streaks of at least four games this year, so it wasn’t much of a surprise when neither team could find a rhythm in their own head-to-head match up. Through the first three and half minutes of game time, BC held the Hurricanes scoreless but only managed two points of its own. Meanwhile, over the same time span, both teams lost the ball on three separate occasions.

For Miami, things were bad from the jump. Anthony Lawrence II stepped out of bounds on his team’s first possession, and, two traveling violations later, the Hurricanes seemed to be scrambling for answers on offense. Still, BC didn’t seem to care to take advantage of the opportunity. An alley-oop pass from Jared Hamilton to Steffon Mitchell that ended up in the third row of the student section proved this point, and it was nearly an additional 10 minutes before the Eagles showed any real signs of life.

In fact, with Bowman locked up by the 5-foot-7 Chris Lykes (the roster swears by this height, but Lykes is certainly even shorter in person) in the first half—he recorded just two points in the period—it was Chatman who led the Eagles’ scoring attack. The graduate senior brought the crowd to its feet with a corner 3-pointer with just over eight minutes to play, and less than a minute later he hit a runner on the fast break to give BC a five-point lead.

And, while Lykes frustrated Bowman for most of the first half, he himself was shut down by Chris Herren Jr., who has proven himself to be one of the Eagles’ best on-ball defenders at times this season. On at least four possessions in the first half, Miami was either beaten by the shot clock or was forced to heave up a deep prayer, much in part to do with the defense of Herren Jr.

At the break, the Eagles held a 25-21 lead, but it could have been much larger had Popovic, Chatman, Jairus Hamilton, and Bowman not lost the ball a combined nine times. BC had 11 turnovers in the first half—a reasonable total for an entire game, much less a half—but was bailed out by Miami’s 9-for-30 shooting mark.

To start the second half though, it was all BC. Perhaps energized by the jersey retirement of Bill Curley ’94, the Eagles came out of the break guns blazing. With 10 points in the first three minutes of the second frame, BC quickly found itself up double figures, yet stalled soon after, going scoreless for the next two minutes.

Again, though, it was Chatman pumping the gas back into the BC offense with another 3-pointer to end the drought. From there, the Eagles held a lead of around seven points through the eight-minute mark, not breaking the 10-point threshold until Herren Jr. snagged an offensive rebound that led to an impressive three-point play.

Playing the rest of the game from behind, the Hurricane’s biggest weakness—3-point shooting—was put on full display for all to see. In the second half as a whole, Miami went 1-for-13 from deep, and its game total of four triples was just one more than BC’s Chatman.

Fittingly, it was Popovic scoring a second-chance layup—recording his 15th point and 14th rebound on the same play—with three minutes left to put the Eagles up 14, essentially ending the game.

The past two games, Christian has proven his squad can win games with or without its star player in Bowman. A single-digit output from your team-leading scorer isn’t ideal, but overcoming such an obstacle to get a win against a conference foe speaks volumes for a coach trying to avoid the pink slip at the season’s end.

Nussbaum Examines Fear, Anger Through Liberal Arts
What is your ideal spring break?