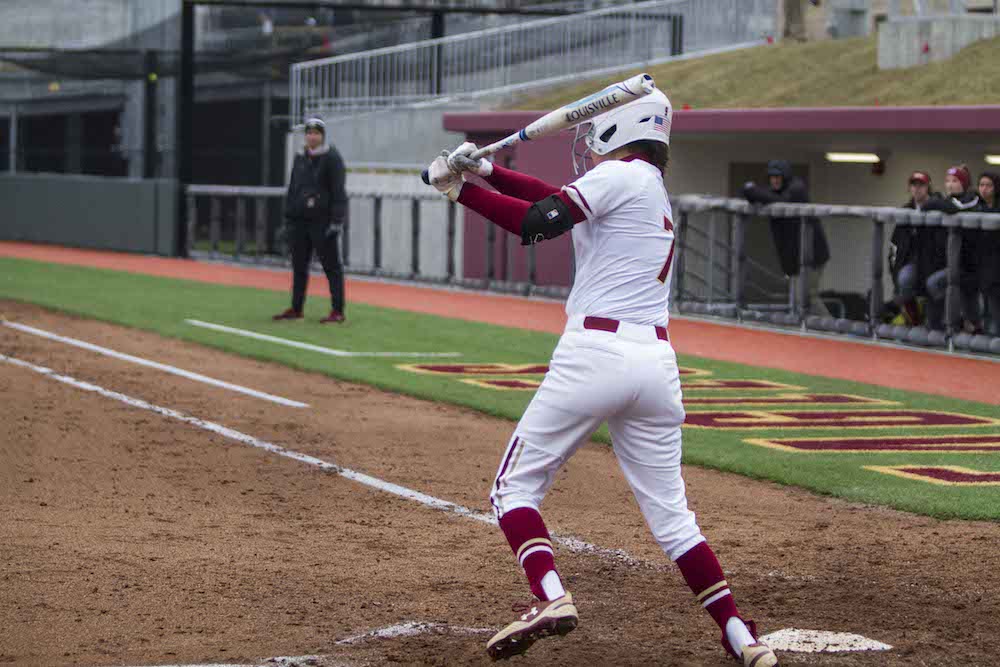 Fresh off a 4-0 win over Pennsylvania, Boston College softball headed to a midweek tilt against Central Florida, looking to build on its first winning streak of the season and find some consistency—especially in the batters box—moving into the start of ACC play. Heading into the game against the Knights, the Eagles had failed to score more than four runs in consecutive contests all season. It was a streak that continued Wednesday.

BC managed just one run—a solo home run off the bat of Jenna Ergle in the seventh inning—and unlike against the Quakers, one run wasn’t going to be enough against UCF. The Knights struck twice in the first inning and added two more runs in the fifth inning before holding off the Eagles’ late rally and winning, 4-1.

Camryn Dolby got the starting nod for BC (6-11) three days after throwing four-plus innings of two-run ball and striking out 10 against Tennessee-Chattanooga, but was in trouble almost immediately against UCF. Tamesha Glover doubled into the gap in right field with one out in the first inning, and Cassady Brewer drove her in two pitches later with a home run to left field. Dolby rallied to strike out Jazmine Esparza and induce a Brooke Barlow groundout, but the damage was done, and the Knights seized an early 2-0 lead.

Meanwhile, the Eagles couldn’t seem to crack UCF starter Alea White, who went six and one-third stellar innings, allowing just five hits and one run while striking out two in the process. Three of those BC hits came in the second frame, when Gianna Boccagno led off the inning with a single to right field, before Gianna Randazza and Lexi DiEmmanuele both produced base hits of their own to load the bases with two outs. White, however, got Emme Martinez to pop out to end the threat.

Dolby would ensure that the Eagles stayed in striking distance, rallying from the first inning to keep the Knights hitless for nearly four innings before allowing a single to Denali Schappacher and, ultimately, making way for Susannah Anderson. The freshman—who threw a shutout against Penn Tuesday—couldn’t repeat the feat this time around.

Schappacher stole second, Glover walked, and both runners advanced on a stolen base before Brewer notched her second hit (and third run batted in) of the game with a single to left field. She would advance to second base on a passed ball that also scored Glover, and UCF took a 4-0 lead into the sixth inning.

Ergle’s shot over the fence made a slight dent in the Eagles’ deficit, and BC would have a chance to do more damage in the seventh. Kristin Giery walked, Boccagno smacked a single to left for her second hit of the game, and White hit Allyson Moore with a wild pitch to load the bases with just one out.

However, Knights head coach Cindy Ball-Malone removed White and inserted Brianna Vasquez, and the freshman got of the jam. First, she struck out Carlie Sanders, and shortly after, she got Randazza to foul out, securing a UCF win.

The loss ended a two-game win streak for the Eagles and provided another indication that BC is still searching for a winning identity entering conference play. With a young team—both Dolby and Anderson are freshmen, and BC’s starting lineup also featured four first-year players—bumps in the road are to be expected.

At the very least, back-to-back strong pitching performances from Dolby are promising and inspire hope that the Eagles have replacements for at least some of the production vacated by the departures of Jessica Dreswick and Allyson Frei.